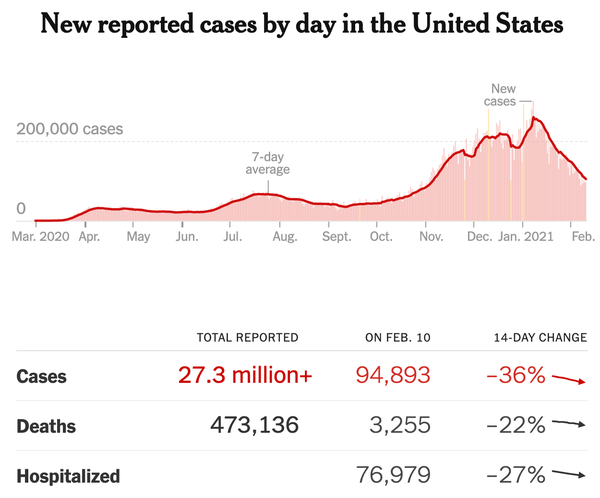 The C.D.C. said that people who have been fully vaccinated do not have to quarantine if they have been exposed to an infected individual.

Millions of fake N95 masks were bought by hospitals, medical institutions and government agencies in at least five states.

The future of the vaccine rollout

Dr. Anthony Fauci, President Biden’s chief medical adviser for Covid-19, said today that most members of the general public could become eligible to get the coronavirus vaccine as early as April.

“I would imagine by the time we get to April, that will be what I would call, for better wording, ‘open season,’” he said. “Namely, virtually everybody and anybody in any category could start to get vaccinated.”

Still, Dr. Fauci said, it will take several months to administer the vaccines. He said that he hoped an overwhelming majority of people in the United States could be vaccinated by mid- to late summer.

For insight into the next few months of the vaccine rollout, we reached out to Katie Thomas, a Times reporter who covers health care and the drug industry.

Will we have enough vaccine doses to meet Dr. Fauci’s timeline?

Let’s just do the math. We have about 260 million adults in the U.S. The country already has a deal with Moderna and Pfizer for enough doses for 200 million people by halfway through this year.

And then there’s Johnson & Johnson. We have the results from their clinical trial and we know it works — especially against what we all care about the most, which is severe disease, hospitalization and death. The F.D.A. is considering its application as we speak, and we could expect the Johnson & Johnson vaccine to be authorized as early as the end of this month.

If that happens, we would have another 100 million doses — enough for 100 million people because it’s a single-dose vaccine. So with Moderna, Pfizer and Johnson & Johnson we have enough to vaccinate the entire adult population by the middle of the year — with some left over.

What other vaccines are we looking for in the near term?

There are two other vaccines that are in the mix. One is AstraZeneca, which has been authorized in more than 50 countries, including Britain. But there are some questions about this vaccine, so people are waiting for the results of the big U.S. trial. If the results are positive, it could be authorized maybe as early as April.

The last vaccine is Novavax, and the company has been enrolling people pretty quickly to its clinical trial in the U.S. and Mexico. If its trial is successful, that vaccine could be available by April.

When will children be vaccinated?

The companies are testing their vaccines in children now, and it’s conceivable that kids could get vaccinated later in the year. Dr. Fauci told ProPublica that vaccines for children as young as first graders could be available as early as September.

Aside from getting enough vaccines out to the states, what obstacles do we face?

Sometimes when we think about vaccinating the entire population, we assume that everyone will want one of these vaccines, and we know that’s not the case, even just looking at the health care groups.

There have been a few people — notably Scott Gottlieb, the former F.D.A. commissioner — who basically say what we’re seeing right now is huge demand and not enough supply. But after this first group of early adopters, so to speak, gets vaccinated, we could end up in a situation where we start seeing more supply than demand. Dr. Gottlieb’s estimate was by the end of March.

So a big question is: At what point do we have to start persuading others to take the vaccine? And his argument is that might actually come sooner than we think.

Some places, like the U.K., have delayed the second dose of their two-dose vaccines in order to get more people a first dose more quickly. What’s the latest thinking in the U.S. on that approach?

I don’t think there is anyone in the United States who is in any position of authority who is in favor of significantly delaying the second dose past six weeks.

Dr. Fauci recently said that the science shows that two doses are effective. In order to delay the second dose, we really need to test that out in a clinical trial. If we do that, it’s going to take time. And his argument is that, by the time we get an answer to that, we will probably have more supply, and so it’s kind of not worth it.

He has also said that delaying the second dose could put selective pressure on the virus that could give rise to more mutations.

What do the variants tell us about what the future will look like?

All of the vaccines that we know about so far have reduced efficacy against the variant from South Africa. Even so, most seem to still offer robust protection against severe disease and death from the variant. And so most of the vaccine makers are talking about developing essentially a booster shot that would address these variants.

The vaccine makers are already starting to think that with the current virus, down the road, we could be headed for a situation where you get an annual Covid-19 shot once a year. And there are even some companies that are starting to talk about combining the flu shot and the Covid-19 shot. But, I should say, we still don’t know.

A variant arrives in a U.S. prison

Officials in Michigan confirmed a case of the more transmissible variant first discovered in Britain in an employee at one of the state’s prisons.

It’s the first documented case of the variant, B.1.1.7, in an American correctional facility, and public health officials fear it could spread rapidly through prisons and jails, which are typically overcrowded and have poor ventilation.

Officials said they had ordered daily testing of all of the more than 1,600 inmates and of staff members at the prison, the Bellamy Creek Correctional Facility in Ionia. As of Thursday, it was not clear whether anyone there aside from the employee had been infected by the new variant.

Unfortunately, some Bellamy Creek inmates were recently transferred to two other prisons, raising concerns that the variant may have traveled with them.

U.S. correctional facilities and detention centers have already been devastated by Covid-19. According to a New York Times database, more than 580,000 people have been infected and at least 2,600 inmates and correctional officers have died.

Countries that are producing vaccines, like China and India, or buying quantities, like the United Arab Emirates, are sending doses to countries where they want to curry favor or thaw frosty relations.

In a bid to get more residents age 75 and older vaccinated, Massachusetts officials said they would also inoculate the people accompanying them, regardless of age.

Dr. Marcella Nunez-Smith, the chair of President Biden’s Covid-19 equity task force, spoke to The New York Times about the challenges ahead.

The director of Britain’s genetic surveillance program told the BBC that the coronavirus variant first detected there was going “to sweep the world, in all probability.”

A cougar in Texas became the latest feline to become infected with the virus.

Many people left Europe’s cities in the pandemic. What will bring them back?

I miss hosting people so much. Coming up with a menu, pouring guests a drink — it is the best feeling. To help cope with my lack of dinner parties, I decided to make goody bags filled with chocolate, stickers, and hand-painted monogrammed cookies for my girlfriends for Galentine’s Day. I dropped them off on their doorsteps, non-contact, and enjoyed the feeling of creating for someone, even if it is from afar.

Pentagon to set up new unit to investigate UFOs

'Do something': Protests as Trump visits Dayton shooting victims