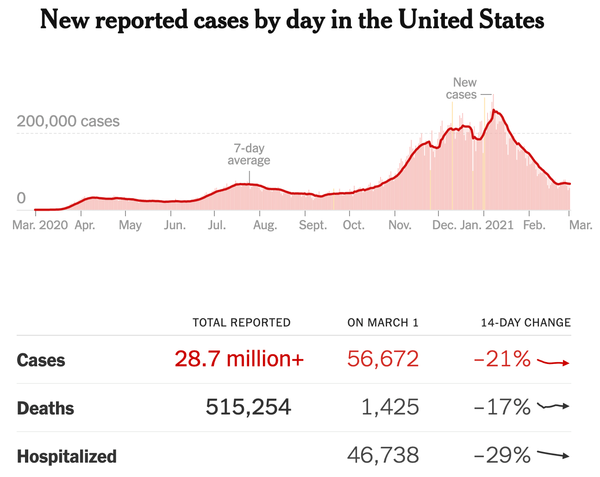 Biden said there will be enough vaccine doses available for all adults by the end of May.

The governor of Texas says the state can reopen fully next week despite C.D.C. warnings to governors against easing restrictions.

A global study found that health care workers faced widespread violence during the pandemic, in which some were beaten, kidnapped or even shot.

The rapid rise of P.1

Three new studies into the coronavirus variant that first arose in Brazil, known as P.1, depict it as an alarming double threat — capable of both spreading more rapidly and evading antibodies.

The new research tracked the variant’s destructive rise in the Amazonian city of Manaus, which was hit particularly hard in the spring, but seemed to have gotten past the worst of the pandemic by April. (Some scientists believed that the city had reached herd immunity.)

But sometime probably around November, P.1 appeared in Manaus, sparking a record-breaking surge in cases. The variant was particularly devastating because of its increased contagiousness; researchers found it to be 1.4 to 2.2 times more transmissible than other lineages of coronaviruses.

More troubling perhaps was the fact that the variant also gained the ability to infect people who had immunity from past Covid-19 infections. Researchers estimated that out of 100 people who were infected with non-P.1 variants in Manaus last year, between 25 and 61 of them could have been reinfected if they were exposed to P.1.

One big unknown is whether what happened in Manaus will be replicated in other areas. P.1 is now spreading across the rest of Brazil and has been found in 24 other countries. In the United States, it has been found in Alaska, Florida, Maryland, Minnesota and Oklahoma, and experts believe it will become more common.

Nuno Faria, a virologist at Imperial College London who helped lead much of the new research, said it was important to double down on every measure known to slow the spread of the virus.

“The ultimate message is that you need to step up all the vaccination efforts as soon as possible,” he said. “You need to be one step ahead of the virus.”

The variant previously known as: The naming conventions for viruses were fine as long as variants remained esoteric topics of research. But now that they are a source of anxiety for billions of people, the World Health Organization is looking for a single naming convention system that would hopefully give the variants names that roll off the tongue — without stigmatizing the people or places associated with them.

The pharmaceutical giant Merck & Company will help manufacture the new coronavirus vaccine from a rival, Johnson & Johnson. The unusual deal between the competitors was brokered by the White House and could substantially increase the supply of the new vaccine.

Under the deal, Merck, an experienced vaccine manufacturer whose own attempt at making a coronavirus vaccine was unsuccessful, will dedicate two of its facilities to the production of the Johnson & Johnson vaccine. One facility will make the vaccine itself, while the other will work on the final manufacturing phase, including putting doses in vials and packaging them for shipping.

Officials hope that by the end of the year, the arrangement will double the capacity of what Johnson & Johnson could manufacture on its own.

But just how quickly Merck will be able to ramp up is unclear. It will take possibly as long as two months or more for the company to convert its facilities.

In the U.S., New York City added workers in the food service and hotel industries to the list of people eligible for vaccination. In Florida, people 50 and older who work in K-12 schools, law enforcement or firefighting will become eligible on Wednesday. In Ohio, people with Type 1 diabetes, pregnant women and certain workers in child care and funeral services, as well as law enforcement and corrections officers, will become eligible on Thursday.

China is aiming to vaccinate 40 percent of its population of 1.4 billion by the end of June.

New York City is quadrupling the number of coronavirus samples that can be sequenced in city laboratories in March.

The leaders of Austria and Denmark are heading to Israel this week to explore future collaborations in the research and development of vaccines against the coronavirus.

The Czech Republic is struggling with a surge in new cases that has left its health care system teetering.

A Frontier Airlines flight from Miami to New York City was canceled after a large group of passengers, all Orthodox Jews, were said to have refused to wear masks.

Should your school be fully open? Here’s what the C.D.C. says.

Many colleges that use fever scanners and symptom checkers have not rigorously studied whether the technology has slowed infections.

The cookbooks of 2020 tell the story of our pandemic kitchens.

We had Covid in March. Barely survived. I’m 86. Celia’s 76. Our grandson Jascha, age 30, saved our lives. He came every day, brought food and cooked our meals. He cleaned our apartment. He earned his inheritance.

US election 2020: Donald Trump proposes pushing presidential debates back by a week