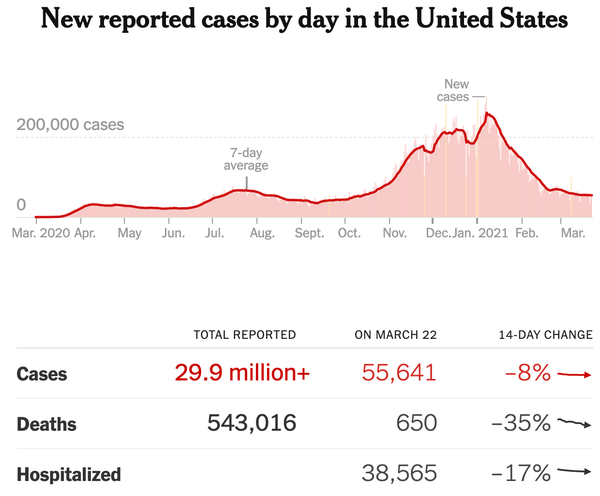 Texas will make all adults eligible for Covid-19 vaccines on Monday.

New York City will bring 80,000 municipal workers back to the office beginning May 3.

AstraZeneca: Not so fast

The news yesterday that AstraZeneca’s vaccine had achieved nearly 80 percent efficacy in U.S. clinical trials seemed like an enormous boost to the vaccine and a source of added confidence to the dozens of countries that are already administering doses.

But then, after midnight, American health officials put out a highly unusual statement saying that AstraZeneca’s results “may have included outdated information from that trial, which may have provided an incomplete view of the efficacy data.”

It was the latest in a string of clinical trial mishaps and public relations blunders by AstraZeneca, and raised a new rash of knotty questions about its vaccine. To help sort through the confusion, we broke down the news and what it means with the help of Times reporters.

Why were American health officials concerned about AstraZeneca’s results?

My colleague Noah Weiland, who covers health care, said that AstraZeneca told American officials over the weekend that the company was about to announce promising results showing the vaccine had a stellar 79 percent efficacy rate — and then it released that data to the public yesterday.

“But it turns out the company was presenting a different data set than one that the independent oversight board overseeing the trial expected, with a higher efficacy rate,” Noah said. The experts said in a highly unusual letter to the company that the vaccine’s efficacy might have been between 69 percent and 74 percent. “The real efficacy rate wasn’t likely that much lower, but it showed that the company’s representatives and independent experts monitoring the trial were on different pages,” Noah said. “With such an important trial and product, officials were shocked by the discrepancy.”

What has AstraZeneca said?

The company defended the data it released yesterday. The company said that results were based on interim data that was current as of Feb. 17. AstraZeneca added that it had collected more data since then and that the new data appeared to be “consistent” with the interim data. The company said it would immediately share its latest efficacy data with the independent panel of experts and reissue fuller results within 48 hours.

What about side effects from the vaccine?

The experts questioned only the data that demonstrated the vaccine’s effectiveness. AstraZeneca reported that its study turned up no serious safety issues — though experts say no clinical trial is large enough to rule out extremely rare side effects.

What have public health experts said?

Scientists have said that the problem could yet turn out to be a technical matter that does not change their assessment of the vaccine. Yesterday’s filing “is really what you call an unforced error,” said Dr. Anthony Fauci. “The fact is: This is very likely a very good vaccine.” However, he noted that the confusion could “cast some doubt about the vaccines and maybe contributes to the hesitancy.”

What’s the fallout from this blunder?

As my colleague Benjamin Mueller reported from London, it has further eroded confidence across Europe, where many countries stopped administering the AstraZeneca vaccine because a very small number of recipients had developed unusual blood clots.

It’s important to note that the issues are very separate: The U.S. regulators were concerned with overall efficacy data, while halts in Europe and elsewhere were because of worries about side effects.

But ultimately this will most likely hinder efforts to rebuild trust in the AstraZeneca vaccine, whose low price and easy storage requirements have made it the backbone of many countries’ campaigns to end the pandemic.

What are the next steps for AstraZeneca in the U.S.?

AstraZeneca said that it would continue to analyze the new data and prepare to apply in the coming weeks for emergency authorization in the United States. Noah said that “it’s still unclear whether this changes how the vaccine might be evaluated by the Food and Drug Administration.”

What does this mean for the vaccine rollout in the U.S.?

Perhaps very little. Even before this week’s reversal, AstraZeneca’s vaccine was going to arrive too late to make much of a difference in the U.S. By May, which is the earliest it would become available here, federal officials predict that there will already be enough doses for all of the nation’s adults from the three vaccines that have already been authorized — from Pfizer-BioNTech, Moderna and Johnson & Johnson.

Approval from the U.S. is hugely important to AstraZeneca, as clearance from American regulators would have been a huge boost to its global reputation.

Nearly 84 million Americans have received at least one vaccine dose — a little over a quarter of the population — and some number of those people have later tested positive for Covid-19.

While it’s unclear exactly how many people have had a “breakthrough” reinfection, two new reports suggest that the number is very small.

One study among fully vaccinated employees at a medical center in Dallas found that just four out of 8,121 people later became infected. Another study of workers at two medical schools in Southern California found that only seven of 14,990 employees tested positive two weeks or more after receiving a second dose of either the Pfizer-BioNTech or Moderna vaccine.

Only some of the infected health workers in the California study showed symptoms, and they tended to be mild, suggesting that the vaccines offered some protection. That echoes data from vaccine trials indicating that breakthrough infections were mild and did not require hospitalizations.

While these cases are rare, they are a sharp reminder that vaccinated people are not invincible, especially when the virus continues to circulate widely. When millions of people receive a vaccine that is, say, 99 percent effective, that still means a significant number of reinfections.

Mumbai, India’s financial hub, has begun random testing for the coronavirus in malls, railway stations and other crowded places to control a worrying surge in cases.

Germany will effectively shut down for an extended Easter break, starting April 1, as the country warned of a more deadly wave of the virus.

Poland, Italy and parts of France have ordered residents to stay home for Easter, and many businesses have shut before the holiday.

More than a dozen cherry blossom festivals around Tokyo have been canceled, though the government lifted a state of emergency in the city that had been in effect since early January.

The results of a large clinical trial strengthened the case for using Regeneron’s antibody cocktail in high-risk Covid patients.

Scientists are examining a possible link between Covid-19 and tinnitus, the medical term for a constant ringing in the ears.

Public health experts are wary about the latest flattening in the U.S. pandemic curve.

As domestic vaccination rates trend upward, more people are traveling or planning to travel. Here’s the latest guidance for doing so safely.

Today at 7 p.m. eastern, join Times reporters, Gov. Larry Hogan of Maryland and others for a subscriber-only event to reflect on one year of the pandemic.

I had the opportunity to vaccinate patients in nursing facilities. The first dose gave many a sense of hope. Returning to give the second dose gave many a sense of relief. There were tears in many eyes, including my own, as they could now look forward to being with their loved ones again. As I looked around the facilities I couldn’t imagine the angst of those who never had an opportunity to experience those same feelings of hope and relief. It was the most satisfying but heartbreaking experience of my nursing career.