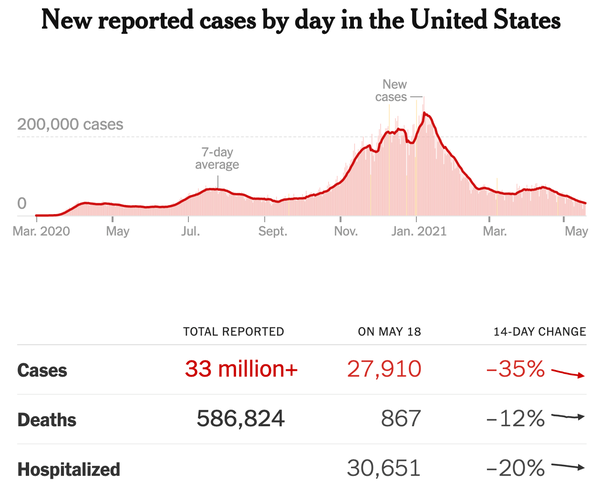 A vaccine maker in India signaled that it wouldn’t export doses before year’s end, slowing aid to the world’s poorest countries.

After 14 months of sacrifice and suffering, New York City finally lifted most coronavirus restrictions today. The occasion was less a free-for-all and more a soft opening, as New Yorkers gingerly explored their reshaped city.

Most businesses, including restaurants, stores, salons and gyms, are now able to open to 100 percent capacity, but only if they can still maintain six feet of distance between people or groups. The same is true for houses of worship. Vaccinated people no longer have to wear masks in most circumstances — indoors or outdoors — but individual businesses are free to set stricter rules. Masks are still mandatory on public transit and in schools, homeless shelters, correctional facilities, nursing homes and health care settings.

Overall, the first day back in business was very New York City: messy, inconsistent and confusing.

Despite the new statewide rules, behavior was regulated by the personal comfort levels of the city’s millions of residents. Masks remained firmly in place for a majority of people, whether in big-box stores, on the streets or in parks. Many businesses were also maintaining the status quo.

“We’re doing everything the same here,” said Elisabeth Ocasio, 51, a server at the restaurant La Isla in the Bronx. “We don’t know who’s vaccinated and who’s not.”

Even so, the day was a milestone after more than a year of being savaged by the coronavirus. One year ago, testing was limited, hospitals were full and thousands were dying every day. New Yorkers confined themselves to their apartments, and the city became a shadow of itself. In total, the known death toll in the city has topped more than 33,000.

Mayor Bill de Blasio said he planned to keep mask rules in place at city offices because there would be a mix of vaccinated and unvaccinated people there, and that he planned to wear a mask in most situations out of an abundance of caution.

“When you’re not sure, my personal advice is wear a mask,” the mayor said, adding, “We’ve done it, for god’s sakes, for a year. We can do it a little bit longer to finish the job.”

Scenes of unease played out across the city. Byong Min, the owner of du Pont dry cleaners on the Upper West Side of Manhattan, spent 90 days in a hospital battling Covid-19 last year and has a scar from his tracheotomy visible above his collar. This morning, a customer arrived and asked if she could she enter without a mask.

He said yes. But he regretted it moments later.

“She told me she was vaccinated and I am vaccinated, but wow, maybe I should be more careful,” he said. “I wasn’t really thinking. I just said OK.”

It wasn’t the food. Pete Wells, The Times’s food critic, writes that what Americans really missed most about going to restaurants was the random thrill of seeing other people.

The E.U. will open its borders to vaccinated travelers and tourists coming from a list of countries considered relatively safe from a pandemic perspective.

The bloc will accept visitors who have received full immunization using one of the shots approved by its own regulator or by the W.H.O. That includes vaccines from Pfizer-BioNTech, Moderna, Johnson & Johnson, AstraZeneca and Sinopharm. The list of safe countries based on epidemiological criteria will be finalized on Friday, and the new measures may go into effect as early as next week.

Member states can tweak the guidelines by requiring negative PCR tests, rapid tests or other measures. The bloc will also maintain an emergency-brake option that will allow it to quickly snap back to more restrictive conditions if a threatening new virus variant or an outbreak emerges.

Travel trend. Far-flung families are combining traveling and togetherness — two of the most longed-for practices during more than a year of pandemic lockdowns — into elaborate new twists on the old-fashioned family reunion.

The United Arab Emirates said it would offer a booster shot for the Sinopharm vaccine at least six months after the initial two doses, Reuters reported.

Vaccination brings greater freedoms. That has tempted some people in Germany to try a most un-German activity: cutting in line.

Australia said it was unlikely to fully reopen its borders until mid-2022. Experts warned that young people could “face a lost decade” because of prolonged economic loss and social dislocation.

In India, the story of Joefred and Ralfred Gregory, twins who lived together and died together from the virus, has resonated widely.

A composer wrote a violin solo inspired by a Times illustration of the Covid genome. You can listen here.

My husband and I are vaccinated, but our small children are still left vulnerable. We are feeling like the new mask guidance from the C.D.C. has left us out in the cold. Those who never wanted to wear masks and those who never wanted a vaccine are the same group. Now, this group is walking around unmasked and putting our children at greater risk. I haven’t felt this scared since the start of the pandemic.

Donald Trump: What you need to know about the impeachment proceedings