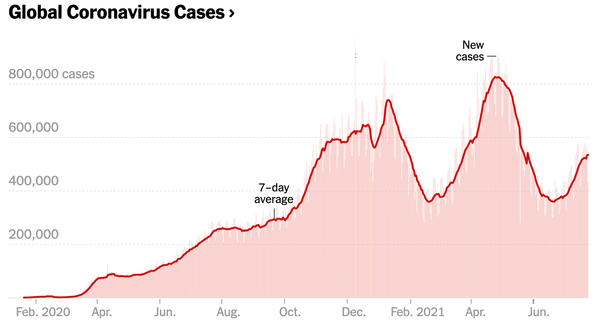 At the F.D.A.’s urging, Pfizer-BioNTech and Moderna will expand their studies of children 5 to 11 to detect rare side effects.

In the most drastic response yet to the lagging vaccination campaign and a Delta fueled surge in infections, a number of local and state governments in the U.S. announced that they were imposing vaccine mandates for workers.

New York City will require all municipal workers to be vaccinated against Covid-19 by mid-September or face weekly testing, Mayor Bill de Blasio announced this morning. A few hours later, Gov. Gavin Newsom of California announced a similar mandate for all state employees and many health care workers.

The Department of Veterans Affairs also said today that it would require its frontline health care workers to be vaccinated against the coronavirus, making it the first federal agency to mandate that employees be inoculated.

Among the flurry of announcements, a group of nearly 60 major medical organizations, including the American Medical Association and the American Nurses Association, called for mandatory vaccination of health care workers.

The moves come as concern is growing that the unvaccinated population is contributing to the rapid spread of the highly contagious Delta variant. Although the new rules are a sharp departure from the Biden administration’s reluctance to embrace mandates, they are part of a broader shift in which many hospital chains and some private employers are deciding that the time has come to make being vaccinated a requirement.

In New York, 340,000 city workers, including teachers and police officers, will have until Sept. 13 to get their shots or face at least weekly testing. The vaccine requirement in California will apply to 246,000 state employees and health care workers and be put in effect by Aug. 23.

At the V.A., the mandate will apply to 115,000 frontline workers, including doctors, dentists and registered nurses, who will have eight weeks to be fully vaccinated or face penalties including possible removal.

Across the Atlantic, France passed a new law over the weekend that would require residents to show proof of vaccination or a negative test to enter public spaces such as restaurants, movie theaters and trains traveling long distances — in one of the most far-reaching vaccine mandates yet imposed by a Western government. Health care workers in the country will also need to be vaccinated by the fall or risk losing their jobs.

“The idea for the restrictions is basically to make the life of vaccinated people easier and that of unvaccinated people quite difficult,” Constant Méheut, one of our reporters in the Paris bureau, told us.

After President Emmanuel Macron announced the mandate in mid-July, 100,000 people marched in the streets. On Saturday, another 160,000 people protested and there were brief clashes with the police. Still, the restrictions appear to be working. In the first week after the announcement, 3.7 million people registered for their vaccine appointments.

“Clearly, it was the restrictions that changed the calculus.” Constant said. “I have many friends who are totally pro-vaccine but had just not signed up yet because they did not feel at risk. Hours or days after Macron’s speech, they signed up.”

These days, more than half a million people across the U.S. are vaccinated on any given day — months into the vaccination campaign. So why are they getting their shots now?

The Times conducted dozens of interviews among the newly vaccinated last week. Some acknowledged that they could have showed up months ago. Many were satisfied that they were finally doing the right thing. A few grumbled that they had little choice.

“I was holding out,” said Willie Pullen as he left a vaccination site in Chicago. “I had reservations about the safety of the vaccine and the government doing it. I just wanted to wait and see.”

The people being vaccinated now are not in the group firmly opposed to vaccinations, but are often the reluctant, the anxious or the procrastinating.

Some were moved by practical considerations: plans to attend a college that is requiring students to be vaccinated, a desire to spend time socializing with high-school classmates or a job where unvaccinated employees were told to wear masks. Their answers to the interviews suggest that the mandates or greater restrictions on the unvaccinated could make a significant difference.

For Cindy Adams, who works for a Des Moines insurance company, it was her job’s requirement to wear a mask as an unvaccinated person that pushed her get a shot.

“I just honestly got sick of wearing the mask,” Adams said. “We had an event yesterday, and I had to wear it for five hours because I was around a lot of people. And I was sick of it.”

“Everyone else is healthy and hasn’t had any side effects, gravely, yet, so I decided I might as well join the crowd,” she added.

In the U.S., some people are mixing and matching Covid-19 vaccines over concerns about the Delta variant, CNBC reports.

Workers in Mexico who produce goods for U.S. companies are getting American vaccines, a move that officials hope could help reopen the border and boost both economies.

Dr. Anthony Fauci is pushing for an ambitious and expensive plan to prepare prototype vaccines for the next pandemic.

Breakthrough infections are frightening, but vaccinated people account for only 3 percent of Covid hospitalizations.

Fears about the Delta variant prompted New Zealand to pause its travel bubble with Australia for at least eight weeks.

In Cambodia, patients who test positive say they are being forced into quarantine centers that are more like makeshift prisons than hospitals.

China reported 76 new cases on Sunday, the most in one day since January, Reuters reports.

Rep. Clay Higgins, Republican of Louisiana, who is a staunch opponent of mask mandates, announced that he and his family have Covid-19.

New York City has distributed only a fraction of the $2.7 billion that it earmarked for pandemic rent relief.

It’s 2 a.m. and I should be sleeping, but I’m looking for the perfect article, the trusted source, the clear graphic that will convince my unvaccinated friends and neighbors to get vaccinated. I want to address their specific questions and concerns and am frustrated that their personal doctors aren’t doing more. I am hopeful that some gentle nudging and hard data will work. I’m grateful to be in the position to have conversations with them, as I don’t think there are others in their circles who will. But it is exhausting.