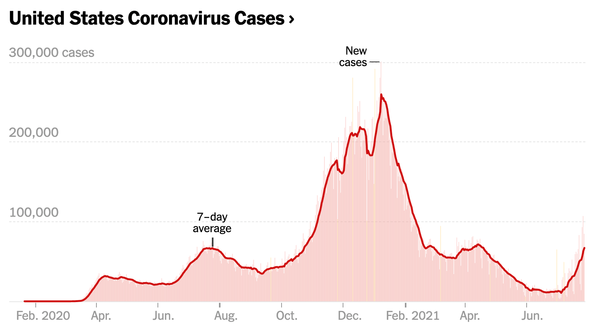 President Biden, blocked by the Supreme Court, called on Congress to extend the eviction freeze.

In a speech this afternoon from the White House, President Biden sought to revive the nation’s stalled vaccination rollout, announcing tough new requirements for federal workers to be vaccinated and urging local and state governments to dole out $100 to everyone willing to get a shot voluntarily.

He also ordered the Defense Department to look into requiring coronavirus vaccinations for all members of the military, a step that would affect almost 1.5 million troops.

A team has been working on that plan for months, trying to juggle the concerns of employees and the need to keep the government functioning.

The solution Biden announced for federal workers is aimed at sidestepping accusations that he is forcing shots in people’s arms. Workers can opt to wear a mask on the job and submit to regular testing, social distancing and restrictions on work travel. Officials hope employees will become vaccinated to avoid the hassle.

Biden’s announcement comes as the E.U. pulled ahead of the U.S. in total vaccinations, adjusted for population. The bloc stumbled in the early days of its vaccination campaign, but is now on a pace to end this week having given about 105 doses per 100 people, and at least one dose to just over 70 percent of adults, while the U.S. is at about 103 doses per 100 people and 69 percent of adults for one dose administered.

Policymaking is far more centralized in Europe, and, crucially, some governments have been more willing to use some coercion. Vaccine resistance in the U.S. is also more vehement. The E.U. vaccination effort has slowed recently, but the drop is small compared to the U.S. drive, which has declined more than 80 percent since its peak.

Still, the E.U. has much wider geographic disparities than the U.S., with the wealthier western region far ahead of the east, and generational divides are emerging — where people under 45 are more hesitant.

Vittoria Colliza, a Paris-based epidemiologist at Inserm, the French public-health research center, said that new lockdown restrictions may have to be reimposed to stem the spread of the Delta variant if immunization fails to keep up.

“They’re increasing already,” Dr. Colliza said about inoculations, especially among younger people. “But the fear is that the Delta variant will begin to fully impact our lives by the end of August.”

Where people are vulnerable to Delta

The varying rates of vaccination across the U.S. have left many areas susceptible to the highly contagious Delta variant. Even areas with high levels of vaccination could see new outbreaks if vaccination rates don’t increase, an analysis conducted for The Times shows.

Estimates developed by PHICOR, a public health research group, suggest that more than 40 percent of U.S. residents may not be sufficiently protected against the Delta variant because of lagging vaccination rates in their communities.

Researchers say it is likely that few, if any counties, have reached herd immunity because the Delta variant is more contagious. That means much of the country is still susceptible to the kind of rapid spread that can put stress on hospitals and lead to worse outcomes for patients.

Prime Minister Naftali Bennett announced today that Israel will begin administering a third dose of the Pfizer vaccine to those 60 and older, citing the surge fueled by the Delta variant.

Whether booster shots are needed by older citizens is an issue that is far from settled among scientists. Most studies indicate that immunity resulting from the vaccines made by Pfizer and Moderna is long lasting. Scientists say vaccinated people probably won’t need booster shots anytime soon.

Even so, some people in the U.S. are getting them anyway, even though it is not technically allowed.

They are going to local pharmacies, other states or even other countries to get extra doses out of concern about the Delta variant or because they are worried their protection may be wearing off.

The C.D.C. has not authorized booster shots, but there is a growing consensus in the Biden administration that people who are 65 and older or who have compromised immune systems would benefit from a third shot. Some public health officials have cautioned that much of this data is preliminary and people should not assume boosters are necessary.

U.S. federal regulators have approved the reopening of a troubled Baltimore vaccine-making plant that has been closed over contamination concerns that delayed the delivery of about 170 million doses of vaccine.

Despite setbacks, AstraZeneca announced that it has released one billion doses to 170 nations this year.

Germany announced that starting this weekend, all travelers arriving from abroad will have to show proof of vaccination, immunity from a past coronavirus infection, or a recent negative test to enter the country.

President Rodrigo Duterte of the Philippines said people who refuse Covid-19 vaccinations should be detained inside their homes.

Thailand began building a Covid-19 treatment center at an international airport as the country battles a surge in infections.

Here’s how companies are responding to the rise in coronavirus cases and how retailers are reacting to the new C.D.C. masking guidelines.

Kaiser Health News explains the mutations that allow the Delta variant to spread twice as fast as the original virus.

Covid at the Olympic Games: 24 new cases, but thousands more in Tokyo at large.

My husband, even though he has been vaccinated, has recently become one of the “disbelievers” with regard to the new variants and its threats on our health. Even though we both are in a high risk group, over 70, he says mask wearing is not based on science but some sort of political climate. I am a retired surgical and critical care nurse and was trained that wearing a mask was not only protecting my patients but also protected me. My husband and I now stand divided. We have a new Republican governor who has poisoned our beautiful state with his rhetoric and legislation. I have reached a point in my marital bliss where I find little, if anything, to talk about as my nation and state struggle to wake people up to basic solutions to getting back on track. This virus has divided us and I am deeply saddened.

Sign up here to get the briefing by email.<Unstash this line for the web version

What we’ve learned so far from the opening statements.