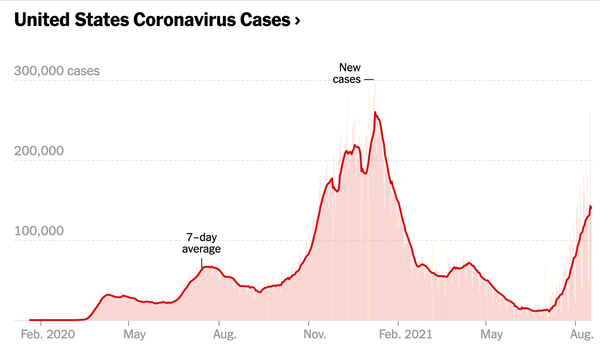 Nursing homes will have to require vaccines for their employees to receive federal Medicare and Medicaid funds.

The Biden administration will use a federal civil rights division to deter states from banning universal masking in classrooms.

Israel, once the model for beating Covid, faces a new surge of infections.

A group of small businesses is suing New York City, hoping to block its vaccine mandate for restaurants, gyms and other businesses.

The basics on boosters

The Biden administration, concerned that the Pfizer-BioNTech and Moderna vaccines are losing potency against the Delta variant, said today it wants vaccinated people to get booster shots — but not quite yet.

Here are the basics:

People who received a full course of the vaccines will be eligible eight months after their second dose.

The program will start on Sept. 20, contingent on authorization from the F.D.A.

As with the initial round of vaccines, health care workers, nursing home residents and other older adults will be first.

Access to vaccines will continue to be free, regardless of health insurance or immigration status.

As we told you yesterday, breakthrough infections appear to be more common than scientists originally believed. And while the vaccines are holding their ground when it comes to hospitalizations and deaths, federal officials worry that the protection could wane — especially among high-risk groups.

“We are concerned that this pattern of decline we are seeing will continue in the months ahead, which could lead to reduced protection against severe disease, hospitalization and death,” Dr. Vivek Murthy, the surgeon general, said at a White House news briefing.

The C.D.C. released three studies on Wednesday that showed waning protection against infection, our colleague Apoorva Mandavilli reports. That decline could be the result of decreased vaccine potency, a drop in precautions like wearing masks, the rise of the highly contagious Delta variant — or all three.

Together, the new studies indicate that mRNA vaccines have an effectiveness of roughly 55 percent against infections, 80 percent against symptomatic infections and 90 percent or higher against hospitalizations, noted Ellie Murray, an epidemiologist at Boston University.

One study of nursing home residents found that the vaccines’ effectiveness at preventing infections dropped to 53 percent from about 75 percent after the rise of the Delta variant. It did not evaluate the vaccines’ protection against severe illness.

The W.H.O. has asked that wealthy countries defer distributing booster shots until the end of September, because many people in developing countries are still waiting for their first doses. There is also concern that variants even more potent than Delta could emerge in countries with low vaccination rates.

Some experts immediately pushed back against the Biden administration’s decision, arguing that the data showed only that some older adults and people with weakened immune systems needed extra protection.

“We’ll be better protected by vaccinating the unvaccinated here and around the world,” said Dr. Céline Gounder, an infectious disease specialist at Bellevue Hospital Center and a former pandemic adviser to the administration.

Jeff Zients, the White House pandemic coordinator, said the administration was on its way to donating more than 600 million doses of vaccines to other countries.

A look at Texas

Yesterday we reported that Gov. Greg Abbott, a Republican, had tested positive for the coronavirus. His office said he was receiving a monoclonal antibody treatment, which can help patients who are at risk of getting very sick, although he had no symptoms.

The announcement came less than a day after Abbott appeared at a crowded indoor political event where he and other attendees were not wearing masks. His office has said he is fully vaccinated, and NBC News reported that Abbott “told people he received a third booster dose.”

Understand the State of Vaccine and Mask Mandates in the U.S.