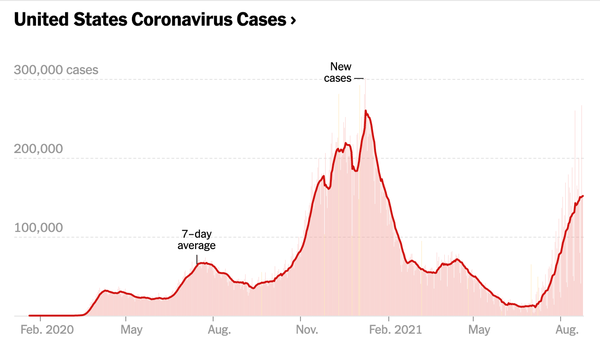 Both Johnson & Johnson and Pfizer and BioNTech reported that booster shots of their vaccines sharply increased antibody levels.

Officials in China said they would hold unvaccinated people “accountable” if they are responsible for outbreaks.

New South Wales, the most populous state in Australia, reported another daily case record on Wednesday.

It’s been more than 18 months since the first cases of a mysterious “pneumonialike illness” were reported in Wuhan, China. The world still isn’t any closer to understanding how the pandemic started.

The director of national intelligence delivered a preliminary report to President Biden on Tuesday about the pandemic’s origin. But officials have yet to answer the biggest question: whether the coronavirus was the result of an accidental leak from a Wuhan lab or whether it emerged naturally in a spillover from animals to humans.

Officials have repeatedly warned that finding the precise origins of the pandemic may be more a job for scientists than spies.

The absence of conclusions also underscores the challenges posed by China’s refusal to cooperate with international investigations into the origin of the coronavirus.

Recently, China’s leaders have been promoting a fringe conspiracy theory that claims the virus came from an American military research facility. A Chinese foreign ministry spokesman cited groundless claims that the coronavirus may have first leaked from Fort Detrick, Md. State media has promoted a rap song by a patriotic Chinese hip-hop group that touted the same claim, with the lyrics: “How many plots came out of your labs?”

Chinese officials have also punished journalists who reported on the country’s failures in handling the Wuhan outbreak.

Zhang Zhan, a 37-year-old citizen journalist, traveled to Wuhan in the early days of the pandemic and challenged the government’s efforts to portray its initial response as competent and caring. She was imprisoned for “picking quarrels and provoking trouble,” a vague charge often used to target dissent, and is now seriously ill from a hunger strike.

“The government’s way of managing this city has just been intimidation and threats,” she said in her last video before her detention. “This is truly the tragedy of this country.”

On Wednesday, W.H.O. experts warned that further delays could make it impossible to recover crucial evidence about the early days of the pandemic.

“The window is rapidly closing on the biological feasibility of conducting the critical trace-back of people and animals inside and outside China,” the experts wrote in an editorial in the journal Nature.

After months of lockdown, the pews are packed on Sunday mornings at Our Lady of Lourdes in Harlem. Prayer groups meet after work and the collection plate is almost as full as it was before the pandemic began.

But, as with so many houses of worship in New York City, the Delta variant is again making many worry about worshiping together.

“For a little while everyone felt more free, not using masks and things like that,” said the Rev. Gilberto Ángel-Neri, the church’s pastor. “But now that we hear all the news about the Delta variant, everyone is using masks again.”

The progress made at Ángel-Neri’s church, and at houses of worship across New York City, may be threatened by a rise in virus cases in the past month and by an uneven patchwork of rules governing vaccination that can differ from one place to another.

The Year of Stair Walks

The ‘L Train Slowdown’ Is Upon Us