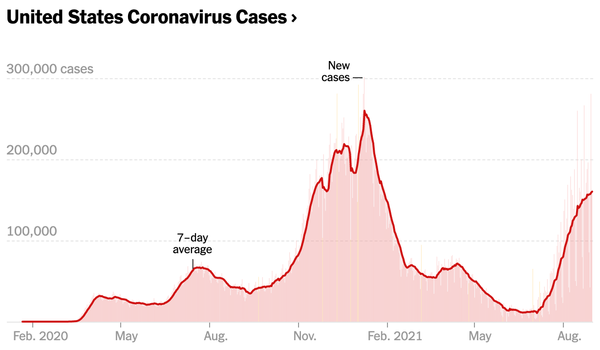 New Zealand is trying to keep a Delta outbreak from spreading, but officials are beginning to acknowledge it cannot stay in lockdown forever.

The C.D.C. said that unvaccinated Americans should avoid traveling for Labor Day.

Joe Rogan, a podcasting giant who has been dismissive of vaccines, tested positive.

The future of Delta

Before the highly contagious Delta variant spread through the U.S., it first struck India and Britain.

In both places, it caused devastating waves. But then cases subsided unexpectedly.

In India, after a horrific spike in the spring, infections fell drastically in June. In Britain, daily cases fell from a peak of 60,000 in mid-July to half that within two weeks, though they have since been climbing again. Scientists are struggling to understand what the patterns may mean for surges in the U.S. and elsewhere.

The next few months

In the U.S., the variant’s pace has slowed.

New infections are falling in some states, like Missouri, that Delta struck hard. Nationwide, the number of infections over the past week was 14 percent higher than it was two weeks ago, a fraction of the rate during much of July and early August.

Still, some experts expect a rebound. A number of national forecasts being tracked by the C.D.C. predict that cases will rise in the early weeks of September.

“Whatever downturn we have, I think, will be fairly mild,” said Dr. Celine Gounder, an epidemiologist and infectious disease specialist at Bellevue Hospital Center in New York. “We’re right at that tipping point where back-to-school will tip us back into growth at some point.”

It’s important “not to overly extrapolate” from Britain and India, Dr. Gounder added. The three countries vary greatly in vaccination rates, the prevalence of mask wearing and other precautions.

In Britain, for example, cases soared in part because of the European soccer championships, which filled pubs with the young and unvaccinated. Once it was over, cases slumped.

Right now, the U.S. is heading into fall with a huge burden of cases. More people gathering indoors will mean more opportunities for the virus to spread, and Dr. Gounder expects to see surges over Thanksgiving, Christmas and New Year’s — although none as bad as they were last winter.

“I don’t think we’re really going to turn the corner until next spring,” she said.

How to protect yourself

If you are unvaccinated and eligible, a shot is your best protection. Unvaccinated people account for an overwhelming majority of hospitalizations and fatalities now, and the shots are widely considered to be safe.

The risk of getting infected from a vaccinated person is also relatively low.

In many cases it will be relatively safe for vaccinated people to spend time, unmasked, with an older relative, my colleague Tara Parker-Pope reports in a new article about how to navigate this phase of the pandemic. But the risk depends on local conditions and the precautions the visitor has taken in the days leading up to the visit.

“If I just came back from a big crowded gathering, and I had to go see my mom, I would put on a mask,” said Gregg Gonsalves, an assistant professor of epidemiology at the Yale School of Public Health, whose mother is 87.

Children under 12 probably will not be eligible for vaccination until the end of the year. The best way to protect them is to make sure all the adults and older kids around them are vaccinated. Studies show that schools have not been a major cause of Covid spreading events, particularly when a number of prevention measures are in place.

A large new study found that Covid-19 survivors were 35 percent more likely than other patients to have long-term kidney damage.

The study, based on data from veterans, suggests that kidney issues can last for months after patients recover from the initial infection, and that they may lead to a serious lifelong reduction of kidney function.

Researchers found that the sicker Covid patients were initially, the more likely they were to experience lingering kidney damage. People with less severe initial infections could be vulnerable, but the risk for Covid patients who never needed hospitalization was very small.

“People who are at highest risk are the people who really had it bad to start with,” said Dr. Ziyad Al-Aly, chief of the research and development service at the V.A. St. Louis Health Care System and senior author of the study. “But really, no one is spared the risk.”