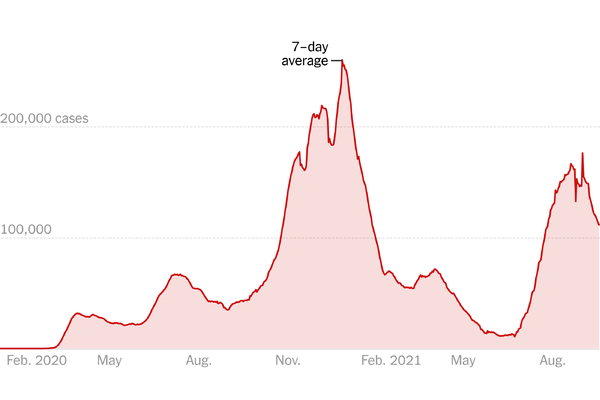 By Amelia Nierenberg and Jonathan Wolfe

Johnson & Johnson will seek F.D.A. authorization for a booster shot.

N.Y.C.’s vaccine mandate for virtually all public school employees appears to have worked: Thousands got a shot last week.

Alaska is currently home to the nation’s worst Covid-19 outbreak, and doctors there are facing the nightmare scenario of rationing care.

Emergency rooms are overwhelmed statewide, testing supplies are depleted, patients are being treated in hallways, and doctors are rationing oxygen.

While many states have approved crisis care guidelines, few have formally carried them out. Alaska has done so. On Saturday, the state said it had activated crisis standards for 20 health care facilities in cities both large and small.

“I never thought I’d see it,” said Dr. ​​Steven Floerchinger, a physician at Alaska’s largest hospital. “We are taxed to a point of making decisions of who will and who will not live.”

In one case, his hospital in Anchorage had one more I.C.U. bed coming available, but several Covid-19 patients in line. And there was also someone from one of the state’s isolated rural communities who needed to be flown in for emergency surgery.

The medical staff had a better chance of saving one of the patients in the emergency room, Dr. Floerchinger and his colleagues determined, than the rural patient. Then, the rural patient died.

“Alaska is going through a really dire situation right now,” Mike Baker, our colleague who spoke with doctors across Alaska, told us. “It’s isolated in unique ways, so hospitals that are overwhelmed don’t have easy relief valves.”

Overloaded hospitals in the lower 48 states have more flexibility to transfer patients, Mike said. But in Anchorage, the closest help is in Seattle, 1,500 miles away.

“In Alaska, if you have someone who needs critical care, you’re almost always going to end up in Anchorage,” Mike said. “So as the hospitals in Anchorage run out of space, more patients are staying in their home communities, even though they would otherwise be getting a higher level of care.”

Gov. Mike Dunleavy, a Republican, has also resisted restrictions, like a statewide mask mandate, to curtail the virus. In Anchorage, our colleague Mike Baker went to a city assembly meeting on a proposed mask mandate and saw angry demonstrators heckling doctors who had come to share their experiences and convey how dire the situation was.

This spring, Alaska was the first state to open vaccinations to all people over 16, and a legion of planes, ferries and sleds brought doses to far-flung communities. Still, only about half the state’s residents are fully vaccinated.

After a brutal second wave this spring, India is now reporting its lowest case counts and death totals in about six months. While the country’s virus statistics have been drastically understated throughout the pandemic, the new numbers suggest a positive trend. To understand more, we spoke to our colleague Mujib Mashal, who covers South Asia.

Why did cases and deaths decline?

Two things. The first is that the virus had a remarkably efficient run in the first couple of waves. The Indian government did some studies that showed two-thirds of the population showed antibodies. The sample sizes were small, and some have questioned the survey, but even if it’s not hard evidence, it’s an indication, backed up by what experts were saying, that the official numbers were undercounting the infections. So if you take the findings from the government survey at face value, the first and second waves reduced the population vulnerable to infection. So that, coupled with a pretty impressive push in vaccinations after a start that was deeply mismanaged — they’ve now administered about 900 million doses so far — has resulted in the downward trend of daily cases.

The State of Vaccine Mandates in the U.S.

Kenneth C. Kelly, Champion of Desegregation in California, Dies at 94