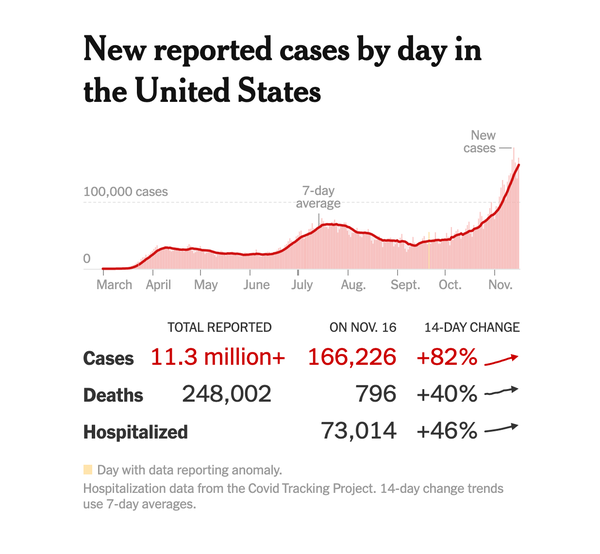 Pfizer said it would work with Rhode Island, Texas, New Mexico and Tennessee to refine plans for delivering and administering its vaccine.

All of Switzerland’s intensive care beds are now full.

U.S. colleges are eliminating spring break from their calendars.

Get the latest updates here, as well as maps and information on vaccines in development.

While the world was wrapped up in the promising news of Moderna’s vaccine, my colleague Apoorva Mandavilli, who covers science for The Times, sent out a cryptic tweet that immediately piqued my interest.

Are you ready for MORE GOOD NEWS?

On top of Moderna, I mean. It's a comin'… probably later today. Watch this space, as they say

This afternoon, Apoorva delivered: According to new research, immunity to the coronavirus may last years, perhaps even decades.

That’s good news because some experts worried that resistance to the virus could be fleeting, and it’s potentially great news for our ability to keep the virus under control with vaccines.

For months, reports of waning antibody levels led scientists to fear that resistance to the virus may be short lived. But researchers from the La Jolla Institute for Immunology who led the study looked at the body’s immune response in 185 patients, ages 19 to 81, who had recovered from the virus.

They tracked antibodies, but also B cells that can make more antibodies, and two types of T cells that kill other infected cells. The researchers also took blood samples from 38 people over many months.

The team found that antibodies stuck around, declining modestly six to eight months after infection, although the amount varied widely among the participants. T cells showed only a slight, slow decay in the body, while B cells actually grew in number. Researchers extrapolated from the slow level of decline over eight months, and concluded that people would most likely be protected for a few years. (How long, exactly, is still hard to predict.)

Experts also initially worried that resistance to the coronavirus might be similar to the flu, which would require people to be vaccinated every year. That would have created a logistical nightmare: The entire world would have to be vaccinated regularly just to keep the pandemic under control. But this research implies that may not be the case.

“It suggests we may have some breathing room, and that may help every country get back on its feet, in terms of the economy and keeping its population safe,” Apoorva said. “It also means that we may actually be able to contain this pandemic a little sooner than we had worried.”

With more than 150,000 virus cases daily, the nation is shutting down again.

California, Washington State and Oregon have closed indoor dining, among other measures. The mayor of Chicago instituted a new stay-at-home order, and Philadelphia’s mayor slapped a ban on most indoor gatherings as part of new sweeping regulations.

The backlash to virus restrictions that the country experienced in the spring is once again cropping up. Resistance has been especially fierce in Michigan, where Gov. Gretchen Whitmer, a Democrat, halted the operation of casinos, movie theaters and in-person learning at high schools and colleges for three weeks beginning Wednesday. A Republican state legislator quickly called for her to be impeached, and Dr. Scott Atlas, President Trump’s coronavirus adviser, urged people in the state to “rise up” in protest.

In Oregon, after Gov. Kate Brown, a Democrat, limited social gatherings to six people and threatened fines or arrests to those who don’t comply, the Republican chairwoman of a board of county commissioners posted a message on Facebook that read: “My family will celebrate Thanksgiving dinner with as many family and friends as I can find. Gov Brown is WRONG to order otherwise.”

But it’s not just Democrats who are experiencing blowback. Gov. Mike DeWine of Ohio, a Republican, ordered a curfew today on businesses from 10 p.m. until 5 a.m. But even before he made any announcement, Mr. Trump issued a warning on Twitter, suggesting that he might support a primary challenger against the Republican governor.

For other Republican governors, the price of inaction while their hospitals are pushed to the limit is too high. After resisting mask mandates, the governors of Utah, North Dakota, Iowa and West Virginia have reversed course in recent days and called on residents to cover their faces.

Not so in South Dakota, where the Republican governor, Kristi Noem, said at a rally for Mr. Trump last month that her refusal to issue restrictions made South Dakotans “happy because they are free.” She has yet to issue any restrictions.

The Chicago metro area is averaging more than 8,700 new cases a day — more than in any whole state other than Illinois, California or Texas.

At a wedding in Washington, more than 17 people among the 300 guests tested positive for the virus, and the number of cases continues to tick up.

Wisconsin reported 92 deaths today, its highest ever. More than 2,700 people in the state have died from the virus, the Sheboygan Press reports.

The Moderna vaccine clinical trial was funded in part by the country music icon Dolly Parton, who made a $1 million contribution to Vanderbilt University.

In a DealBook virtual conference, Dr. Anthony Fauci called for a “uniform approach” rather than a “disjointed” state-by-state pandemic response.

President Jair Bolsonaro’s cavalier handling of the coronavirus drew outrage. But as the curve in Brazil has flattened, his political standing has strengthened.

Pfizer’s C.E.O., Albert Bourla, told Stat news that the company may apply to the U.S. government for emergency-use authorization for its coronavirus vaccine within a matter of days.

Chuck Grassley, the oldest Senate Republican, will quarantine after he was exposed to the virus.

Loving County, in Texas, is the only county that has not recorded a single positive case of the coronavirus. That may be a technicality.

False information about mouthwash and the virus is recirculating online. But experts still warn that it won’t save you from Covid-19.

I am a registered nurse, working at an ambulatory surgery center. I take all of my breaks and lunch in my car — our lunchroom is tiny. I used to do fake horoscope readings at lunchtime, making my co-workers laugh. Now, I play New York Times word games. I like it when The New York Times tells me I’m a genius, but I would rather make people laugh.