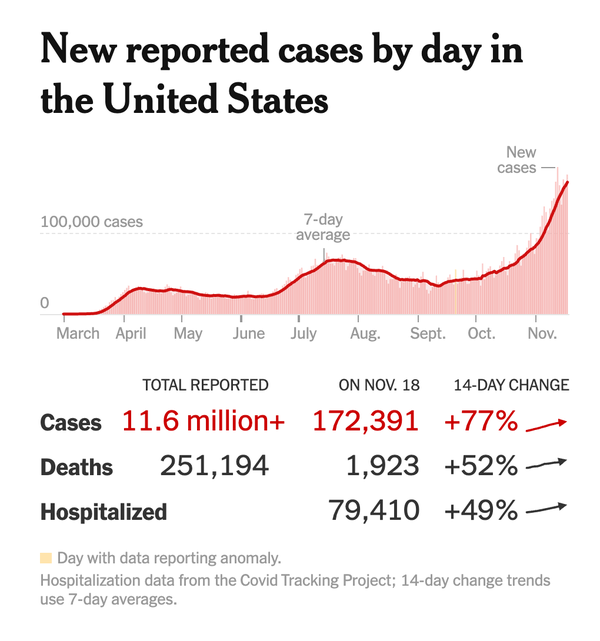 The death toll in the U.S. has surpassed 250,000, after startling surges in infections and hospitalizations.

The C.D.C. strongly urged Americans to avoid traveling for Thanksgiving.

The W.H.O. said a decrease in new cases in Europe appeared to signal that restrictions were working.

Health care workers are begging us

As the pandemic rages across the United States, breaking records nearly every day for deaths and cases, some nurses and doctors are reaching a breaking point.

Some have battled surges in their areas for months. Others have been more recently overwhelmed. Many are physically and emotionally drained and suffer from a crushing sense of inadequacy and anxiety. Experts say health care workers are ever more susceptible to post-traumatic stress. Some are closing their practices or leaving their jobs because of the toll on themselves, their families, their patients and their colleagues.

Particularly anguishing, some health care workers say, is the cavalier attitude many Americans display toward the virus.

“There is such a disconnect between the hospital and the surrounding communities,” one doctor wrote in an exchange later posted on Twitter. “I don’t drive home to bells, whistles and clanging pots and pans … I drive home stunned through a college town with lines out the doors for the local bars.”

In an attempt to break through that disconnect, about 100 of the nation’s largest and best hospital groups released an ad campaign today, in print and video, that is a call to arms — or rather, a call to mask up.

“We put our lives on the line daily to keep you safe. So, do something for us. Wear. A. Mask,” a caption in the video reads.

I reached out to Ashley Bartholomew, a registered nurse who recently resigned from her job in a Covid ward at an El Paso hospital, but stayed on for another two weeks because of the desperate need. She said identifying a single breaking point was difficult, but told me about an exchange with a patient who was improving.

She went into his room in full P.P.E. as he was watching the national news cover El Paso’s need for more mobile morgues.

“He said the news is making it a bigger deal than it really is,” she recalled. She tried to remain professional, but couldn’t hold back her tears. “I said: ‘You know, I’ll be brutally honest. This is my last shift and I’ve never seen so much death, so much sickness, in the last two weeks than I have my entire 10 years of being in health care.’”

Taken aback, the patient said he thought everyone in the ward was doing as well as he was. Of the 25 rooms she had been in that day, she told him, he was the only patient able to chat. Everyone else was too sick.

“This is a pandemic within a pandemic,” she said. “A pandemic of misinformation along with the Covid-19 pandemic. And health care workers, we can’t fight both at the same time.”

Even as states across the country put new virus restrictions in place, New York — once the epicenter of the virus — has taken a much more measured approach.

Instead of a full shutdown, officials are banking on a variety of less disruptive, targeted actions, often relying on voluntary compliance. Gov. Andrew M. Cuomo’s strategy has largely been to focus on areas he calls “microclusters,” closing schools and nonessential businesses in harder-hit neighborhoods and regions. In New York City, after the seven-day positivity rate rose above 3 percent, Mayor Bill de Blasio closed in-person classes at the city’s schools as of today.

While New York has a much lower infection rate than many states, the virus is clearly on the upswing. Thousands of new cases crop up daily, hospitalizations have more than quintupled since September, and deaths are on the rise.

Some officials are worried that without a broader shutdown, the state may not be able to effectively control the virus, particularly with pandemic fatigue only growing as the holidays arrive. Many are extremely worried about repeating the mistakes of the spring, when the governor was criticized for not shutting down fast enough. The bulk of the state’s more than 33,600 deaths occurred between March and May.

Mayor de Blasio said today it was “just a matter of time” before the city hit the state’s threshold for entering the “orange zone”: a seven-day average for test positivity above 3 percent for 10 days. Entering that zone, which requires the closing of gyms and indoor dining, was “very likely to be in the next week or two,” he said.

Africa is experiencing a concerning uptick in confirmed coronavirus cases and has now passed the two million mark, even as testing remains low. Key factors appear to be superspreading events, especially at universities in South Africa; the approaching December vacation period; and complacency.

Japan is on “maximum alert,” warned its prime minister, as it faces a third wave of cases that is hitting more than just young people, a change that could further strain hospitals.

A number of restrictions went into place in the U.S. In Maryland, all bars, restaurants and nightclubs must close by 10 p.m. In Pennsylvania, the authorities said anyone traveling to the state would need to be tested before arrival. Denver is moving to all-remote teaching, and so is Kentucky. Los Angeles County announced a curfew for businesses, and Illinois also imposed new restrictions.

Researchers reported that the vaccine being developed by AstraZeneca and the University of Oxford produced strong immune responses in tests with both older and younger adults.

A new report by UNICEF, the United Nations agency for children, warned of a “lost generation” and found that school closures caused long-term harm while doing little to slow the spread of the virus.

Denmark’s government in danger of collapse over its order to slaughter millions of minks to prevent the spread of a mutation of the virus that could be less susceptible to vaccines.

A lawsuit alleges that the manager of a Tyson pork plant in Waterloo, Iowa, organized a betting pool among supervisors to wager on how many workers would get sick.

The Times graphics team illustrated how the states that imposed few restrictions now have the worst outbreaks.

There is little to no evidence that deep cleaning mitigates the threat of the virus indoors.

For over 40 years a group of friends met before Christmas to socialize and play the “gift exchange” game. Anonymous brightly wrapped gifts are randomly chosen and sometimes stolen and finally opened together to amazement and mostly laughter. This year, the plan is to post images and descriptions of the gifts and play the game virtually, then mail them to the recipients and later open them virtually. It remains to be seen if it will be as much fun but at least we will “get together” twice for the holidays.

For Pregnant Women, a Push to Head Off Depression Before It Starts

How to take the environment into account while travelling

Black families purchase 96 acres of land for a ‘safe haven’