Top US infectious diseases expert Anthony Fauci has said he was concerned that White House coronavirus task force member Scott Atlas was providing misleading or incorrect information on the pandemic to the president.

Speaking to CNN, the head of the National Institute of Allergy and Infectious Diseases said: “Well yeah, I’m concerned that sometimes things are said that are really taken either out of context or actually incorrect.”

It comes as Donald Trump has announced the rollout of 150 million “rapid” coronavirus tests during a news conference.

In a carefully scripted speech to reporters on the White House lawn, he unveiled a “massive” and “ground-breaking” expansion of coronavirus testing in the US. 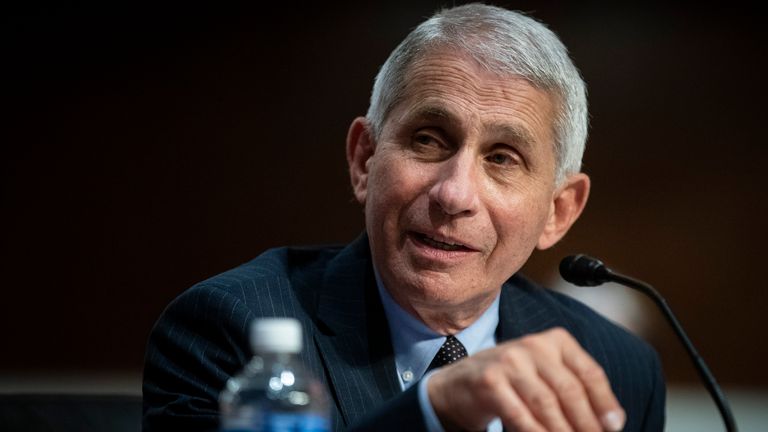 The Abbott rapid test, which involves swabbing a person’s nasal passage before dipping the swab into a solution, can give users a result in about 15 minutes, without the need for a computer to process.

The US has the world’s highest number of confirmed COVID-19 cases at more than 7 million and the most coronavirus-related deaths, approaching 205,000.

And according to analysis released by the Reuters news agency, the number of new cases has risen for two weeks in a row in 27 out of 50 states, with North Carolina and New Mexico both reporting increases above 50% last week

The Midwest has emerged as the country’s new hotspot, with hospitalisations surging in some states.

The World Health Organisation considers rates above 5% concerning because it suggests there are more cases in the community that have not yet been uncovered.

And earlier Dr Fauci told ABC’s Good Morning America that he was concerned about the trend as the weather gets colder and people spend more time indoors, increasing the likelihood of spread.

“We’re not in a good place… because as we get into the fall and the winter you really want the level of community spread to be as low as you can possibly get it.

How the mid-term elections broke records