Home » Americas » Could this be football’s best ever goalscorer? 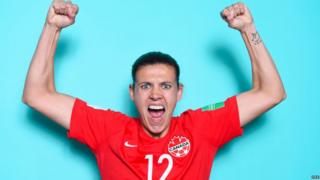 Christine Sinclair is four goals away from being the top international football scorer – of any gender – in the world. But the veteran player is still hustling for her big win.

On Wednesday, she celebrated a major milestone in her life – her birthday.

The 36-year-old Canada captain marked the occasion alongside her teammates in France with a chocolate lava cake.

Soon, she could be celebrating another milestone, as Sinclair is just four goals away from becoming the top international football goal scorer in the world, of any gender.

“Obviously it would mean a lot,” Sinclair told BBC Sport. “I remember starting my career and thinking, ‘I have so many goals to get to’ but sort of having my eye on the record as a 16-year-old.”

It’s an achievement that has been a long time coming, says Laura Armstrong, a sports reporter for the Toronto Star.

“Canadian soccer has grown by leaps and bounds in the time that she’s played for the team, but if she was playing for the United States team, she would have hit this record years ago.

“She almost had to wait for the team to catch up to her, and that makes those goals even more impressive.”

Sinclair comes from the closest thing Canada has to a football dynasty – her father was an amateur champion and both her uncles went pro.

But growing up in Burnaby, British Columbia, in the 1980s and early 1990s, Sinclair was largely shielded from football mania. Hockey was the national pastime, and a poster of Toronto Blue Jays’ second baseman Roberto Alomar hung on her wall.

An all-around athlete, Sinclair excelled in youth football and made British Columbia’s all-star youth girls squad at 11. By 16, she was playing for Canada’s national team at the Algarve Cup, and was the tournament’s top scorer with three goals.

Nearly two decades and 178 goals later, Sinclair is poised to become the greatest football scorer in the world, at a time when many other athletes her age are considering retirement, notes Jamie Goldberg, who covers Sinclair’s club team the Portland Thorns for the Oregonian.

“She’s out there longer than anybody else, and she doesn’t have to be,” she says.

She is still the team’s top scorer, having earned four out of five of the team’s goals in 2019 so far. But she has also learned how to adapt her style of play, moving farther back in the field to help to create plays, not just execute them.

It’s that work ethic that has made her such an inspiration not only in her home country of Canada, but wherever she plays.

“When you’re around Christine Sinclair, you feel you have to be better,” a Portland Thorns teammate told Goldberg recently.

When – not if – Sinclair scores four more goals, she will become the highest international goal scorer in the world, unseating her one-time rival, retired American footballer Abby Wambach, who holds the current record with 184 goals.

It is no coincidence that the top two goal scorers in the world are women. Fifa women’s matches tend to have a much higher score overall then men’s. This week, the US women’s team made history when they beat Thailand 13-0. That is more goals in one match than the US men’s team has scored in the last four World Cups combined (given they scored 0 goals in 2018 because they did not qualify).

This disparity has furthered the argument for pay equity between men and women’s international football.

In fact, of the top ten international goal scorers, only one – Iranian Ali Daei, who is at 10th place with 109 goals – is a man. Superstars Lionel Messi and Wayne Rooney don’t even crack the top 25, with 67 and 53 goals, respectively.

So why are women outscoring men on the pitch?

On the one hand, women tend to have longer careers on national teams than men, which helps them wrack up more goals.

Sinclair has been playing for Canada for 19 years, and has earned 183 caps (a soccer term for the number of games played for a team).

Meanwhile Daei, the top goal-scorer for men, only played for 13 years and earned 149 caps.

But another reason might have to do with the funding gap itself.

“You don’t see women’s soccer as well-funded as it needs to be around the world. So you have the teams in the Top 10 maybe Top 15 at a completely different level than [the rest],” Goldberg says.

That makes it easier for a big fish like the US, which is currently ranked number one in Fifa, to trounce a minnow like Thailand. And that also might make it easier for a superstar like Sinclair to rack up goals against her less-skilled opponents.

Although Sinclair’s individual record is undeniable, major trophies have alluded her. Canada has never won a World Cup. Olympic gold has missed her – twice. And she has never won Fifa’s player of the year, a fact that is quite shocking, given her prolific achievements in the sport.

At 36, it’s possible that this World Cup will be her last. Canada is currently ranked fifth in the world, and while a win is not unfathomable, it is also not likely.

“It could very well be the case that she never wins a major trophy,” Armstrong says.

It’s that space on her shelf that keeps her up at night, she told BBC Sports.

“The second I lose that burning desire is the second I have to hang up the boots. What motivates me right now is to win a World Cup.”

‘They were living the dream’: Community reels after Yukon mom and baby killed by grizzly bear

US Senate passes border aid Bill, sends it to House