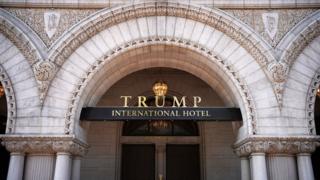 A federal appeals court has rejected a case arguing that US President Donald Trump is unconstitutionally profiting through his hotel in Washington DC.

The case hinged on a law which bans the president from receiving “profit, gain, or advantage” from governments.

A three-judge panel ruled the attorneys general of Maryland and Washington DC, who brought the lawsuit, do not have sufficient standing to bring the case.

Mr Trump quickly took to Twitter to respond to the verdict.

“Word just out that I won a big part of the Deep State and Democrat induced Witch Hunt,” he tweeted on Wednesday.

“I don’t make money, but lose a fortune for the honour of serving and doing a great job as your President (including accepting Zero salary!),” he added.

The Trump International Hotel is located on Pennsylvania Avenue, just four streets from the White House.

It has become a popular favourite among Republican visitors to the city. In 2018, it generated revenue of over $40.8m (£31m), according to Mr Trump’s financial disclosure forms.

The so-called Emoluments Clause of the US Constitution prohibits a president from any “profit, gain, or advantage” received “directly or indirectly” from government workers.

This case overturned a Maryland judge’s decision last year, in which a judge ruled that the attorneys general did had a legal standing to go to trial.

What did the judges say?

The three-judge panel of the US Court of Appeals for the 4th Circuit said the case lacked standing because they could not prove that nearby businesses were harmed by competition from Mr Trump’s hotel.

Judge Paul Niemeyer wrote in the 36-page opinion that the arguments put forth by Washington and Maryland are “so attenuated and abstract that their prosecution of this case readily provokes the question of whether this action against the president is an appropriate use of the courts”.

The opinion adds: “There is a distinct possibility – which was completely ignored by the District and Maryland… that certain government officials might avoid patronising the hotel because of the president’s association with it.”

“Even if government officials were patronising the hotel to curry the president’s favour, there is no reason to conclude that they would cease doing so were the president enjoined from receiving income from the hotel,” they wrote.

All three judges were appointed to the panel by Republican presidents. 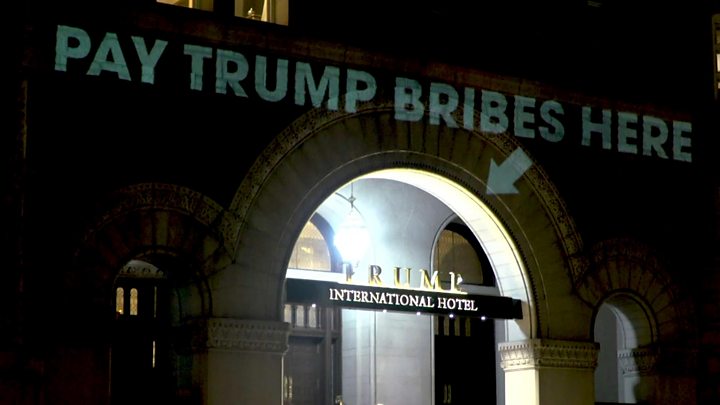 Shortly before he becoming president, Mr Trump stepped back from running his company – the Trump Organization – however he still retains ownership of the real estate empire.

Washington DC’s Trump International Hotel – as it is formally known – was opened in September 2016 – just months before Mr Trump won the presidential election.

The Trump Organization was granted a 60-year lease to inhabit the former Old Post Office from the federal government prior to his election.

They added Mr Trump was “brazenly profiting from the Office of the President” and they would “continue to pursue our legal options to hold him accountable”.

In a statement, the US Justice Department cheered the decision, and called the case “extraordinarily flawed” and said the prosecutors “improperly asked the courts to exceed their constitutional role by reviewing the President’s compliance with the Emoluments Clauses,” said spokeswoman Kelly Laco.

Attorneys General of Washington DC and Maryland have both previously said they would consider appeals the case further, including all the way up to the Supreme Court.