Warning that New York had entered a “new phase in the war against Covid,” Gov. Andrew M. Cuomo said on Monday that the state will implement a barrage of new emergency actions, some of which echo the strict measures taken this spring, to stem a rising tide of infections and deaths.

Mr. Cuomo said that the strength of the virus’s second wave has forced the state to rely less on test positivity rates as the determinant for restrictions, and focus more on hospital capacity. On Monday, the governor announced that hospitalizations topped 3,500 over the weekend, a level not seen since May.

The governor said if hospitals become overwhelmed, he could impose a regionally based shutdown, or “pause” order, as he did statewide in the spring. He also asked hospitals to begin identifying retired doctors and nurses to help staff medical facilities, where he said burnout was an increasingly common problem.

The governor said he wanted to prevent the conditions that led to Elmhurst Hospital in Queens being inundated by coronavirus patients this spring, with beds filled, doctors overworked and refrigerated trucks posted outside to hold the dead.

“We are not going to live through the nightmare of overwhelmed hospitals again,” Mr. Cuomo said during a briefing in Manhattan.

Mr. Cuomo said that he would ask hospitals to increase the number of beds by 50 percent, and hospital chains to evaluate where there was capacity inside of those systems, to help redistribute patients where there was availability.

Plans for field hospitals were being dusted off, the governor said, adding that capacity would also be evaluated between hospitals in different parts of the state, an idea known as “surge-and-flex,” another measure the governor implemented in the spring. 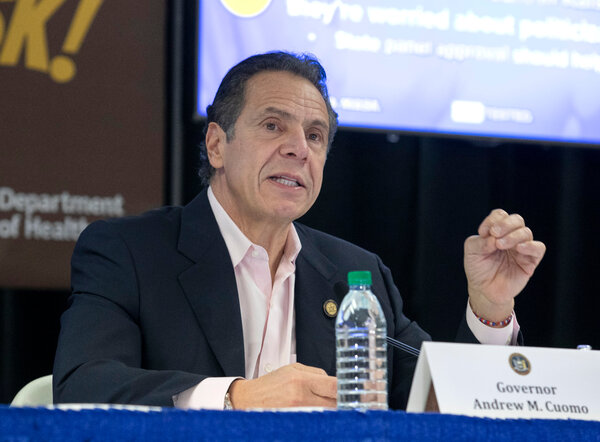 Similarly, Mr. Cuomo also announced that he was ordering hospitals to stop elective surgery in Erie County, in Western New York, which has seen some of the highest rates of infection in the state.

Despite rising rates of infection, Mr. Cuomo has resisted implementing the kind of widespread shutdowns seen in March, when hundreds of New Yorkers began to die every week, and much of New York’s economic activity ground to a complete halt.

Rather, Mr. Cuomo’s strategy has been to utilize targeted restrictions on individual areas — known as his “micro-cluster initiative” — which has now expanded to 30 locations around the state, including in all five boroughs of New York City, its suburban counties, and major upstate population centers.

The announcement on Monday came after weeks of steadily more worrying news in New York. The state’s daily rate of positive tests on Sunday topped 4 percent for the first time since May, and the number of more serious cases continued to grow. The positivity rate was reported to be 4.57 percent on Monday.

The death toll has also started to rise again: On Monday, the governor said 54 deaths were reported by the state. All told, almost 1,000 people died in New York this month, according to The New York Times’s tally, making November the deadliest month since June. The state has suffered more than 34,000 deaths since the discovery of the first case in March 1, the most of any state.

Mr. Cuomo, a third-term Democrat, has been touting the state’s response to the crisis for months, releasing a book in October about “leadership lessons” drawn from his experiences. The governor has also repeatedly made a point of saying that New York is doing well in comparison with other states.

On Sunday, however, the governor seemed to modify his thinking on that point somewhat, saying, while “it’s nice that we’re doing better in a national context,” it is also “irrelevant.”

“Because we have to deal with the issues that we have here in New York relative to New York, right?” Mr. Cuomo said.

Mr. Cuomo praised efforts by Mayor Bill de Blasio, who appeared at the news conference via Zoom, to reopen elementary schools, while voicing broader support for plans to keep students in kindergarten through eighth grade in classrooms.

The city will no longer use a 3 percent test positivity threshold that it had adopted for closing the school system; instead, the city will increase testing in schools and close those that have multiple confirmed virus cases.

And with the state’s test positivity rate now above 4 percent, Mr. Cuomo — seemingly aware of how relying solely on rising infection rates could lead to economically detrimental shutdowns — had been indicating that a statewide shift in strategy was coming.

On Monday, the governor said new metrics — including hospitalization rates, death and case rates, and available hospital beds — would be used to determine lockdown levels under the “micro-cluster” strategy, the state’s color-coded restriction system. Mr. Cuomo said those new numbers will be set this week, after the state evaluates the effects of people congregating during last week’s Thanksgiving holiday.

“I don’t believe we’ve seen the hit from Thanksgiving,” he said, adding that he believed the increase in cases “will be dramatic.”

Indeed, Mr. Cuomo predicted that the rates of infection would continue to rise through December and into January, while still expressing confidence that the state could withstand the second wave.

“It is all in our control,” Mr. Cuomo said, saying it was up to residents of the state to abide by safety measures to control the virus.

“I believe in New Yorkers,” he said. “They did this before at a much harder level, with less notice. And we’ll do it again. But we have to do it.”