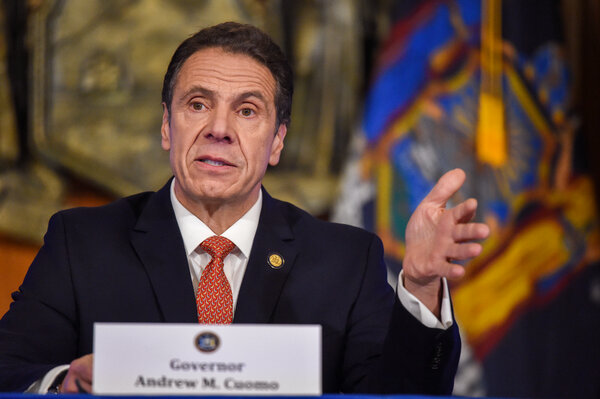 For much of the past year, Gov. Andrew M. Cuomo’s profile appeared to be rising. His daily news conferences during the pandemic drew a national following and provided a foil to President Trump’s dismissive response to the crisis. Some Democrats mused about putting Mr. Cuomo on the presidential ticket.

Now, a scandal unfolding over allegations that he sexually harassed aides has cast a cloud over the three-term governor’s tenure, drawn calls for an independent investigation and prompted some politicians to suggest that Mr. Cuomo should consider resigning.

The allegations come as Mr. Cuomo’s administration already faces a federal inquiry over its handling of nursing homes in the pandemic. A number of accusations of bullying behavior have also recently surfaced from lawmakers and former staff members.

[Private conversations are starting to unfold about who might be best positioned to challenge Mr. Cuomo in next year’s gubernatorial elections.]

A 25-year-old former aide to the governor, Charlotte Bennett, accused Mr. Cuomo on Saturday of sexual harassment, saying he told her in June that he was open to dating women in their 20s and spoke to her in discomfiting ways about her own experience with sexual assault.

On Wednesday, another aide, Lindsey Boylan, described several years of uncomfortable interactions with Mr. Cuomo, including an invitation to play strip poker on a government airplane.

In an initial response to Ms. Bennett’s allegations, Mr. Cuomo said that he believed he had been acting as a mentor and had “never made advances toward Ms. Bennett, nor did I ever intend to act in any way that was inappropriate.”

On Sunday, the governor went further, acknowledging that “some of the things I have said have been misinterpreted as an unwanted flirtation” and apologized.

His promise of an investigation also underwent revisions: He first said on Saturday that he would appoint a former federal judge, Barbara Jones, to lead an inquiry into the allegations, but backtracked after critics pointed out the judge’s close ties to one of the governor’s longtime advisers.

Then he said he would ask Letitia James, the state attorney general, and Janet DiFiore, the chief judge of the court of appeals, to “jointly select an independent and qualified lawyer” to review the allegations.

But Ms. James and others said the plan did not empower her to do an investigation with subpoena power.

Late Sunday, Mr. Cuomo again changed course, saying in a statement that Ms. James alone would be responsible for choosing an outside investigator and granting subpoena power to that person.

She Was Seen as a Victim in the Sarah Lawrence Cult Case. Now She’s Charged.

Cuomo’s Crisis and Republicans Clash: 5 Takeaways from the Mayor’s Race

3 Injured in Manhole Fire and Explosion in Manhattan

A man who spent more than 40 years working in subway token booths died while riding a train home from work. [Daily News]

A carriage horse that was euthanized after collapsing in Central Park last year, prompting protests from animal rights’ activists, probably had a genetic muscular disease, according to an examination released by the drivers’ union. [N.Y. Post]

When wedding receptions resume in New York in two weeks, guests can dance only with members of their immediate party, household or family seated at the same table, according to new guidelines. [N.Y. 1]

And finally: The women who shaped the New York Public Library

In 1929, when Jennie Maas Flexner helped launch the New York Public Library’s first “Reader’s Advisory Office,” a novel service that would help readers find books based on their interests or desires, the library made a deliberate attempt to not tell the press. Too many people might overwhelm the library’s staff, officials reasoned. “The aim has been from the first, because of staff limitations, to serve the reader who comes rather than to reach great numbers of people,” Ms. Flexner wrote with a colleague in a 1934 report.

In the decades since, such services have become widespread, a consequence of Ms. Flexner’s efforts at the New York Public Library, where she worked until her death in 1944. She is one of 20 New York librarians the public library will highlight this month, Women’s History Month.

Five librarians will be highlighted every week. In addition to Ms. Flexner, this week's list includes:

Augusta Braxton: Ms. Braxton was hired in 1937 as a children’s librarian and worked for the library for nearly 40 years. In 1953, she became the first Black librarian in an administrative position at the New York Public Library and pushed the library to showcase books that better portrayed people of color.

Pura Belpré: She was hired in 1921, becoming the first Puerto Rican librarian at the New York Public Library. She pushed the library to carry Spanish-language books and held bilingual storytelling sessions.

Esther K. Johnston: She joined the New York Public Library in 1916 and became acting head of the library’s branches in 1943 when her predecessor was called away to serve in World War II. She was officially appointed to the position in 1947, becoming the highest-ranking female librarian in the country.

Genevieve Oswald: Ms. Oswald joined the public library in 1944 and founded its dance collection. She never stopped advocating for dance to be considered a legitimate field of study, despite being told to “go off and have babies” at one point.

I had a job at a cafe on the Upper East Side. When I was first hired, the owner taught me how to froth milk for the perfect latte using very cold milk and a small metal cup.

One very busy morning I was making lattes by frothing the milk directly in the paper to-go cups. This was a huge faux pas, but also a great time saver.

After the morning rush ended, I noticed that the small metal cap that screws onto the nozzle and directs the steam was missing.

I checked the counter and the floor, but I couldn’t find it anywhere. Eventually, I realized that it must have fallen into a drink. My mind filled with an upsetting thought: What if someone swallows it and chokes?

As closing time neared, I was moping behind the bar when a woman stepped one foot into the cafe, shook a to-go coffee cup like a maraca, pulled out the missing cap and placed it on a nearby counter.

What would you like to see more (or less) of? Email us: [email protected]Mon

The New Speakeasy: Cocktails in a Stranger’s Kitchen