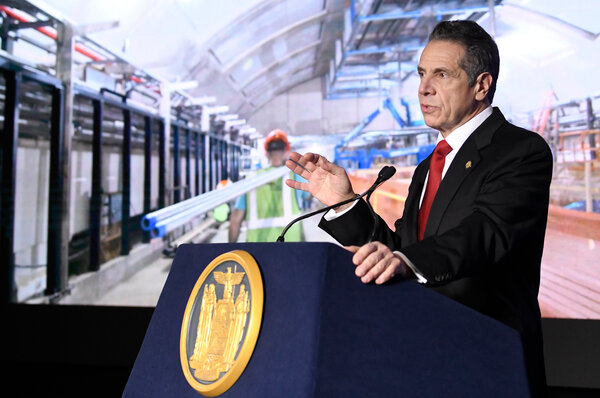 A year ago, Gov. Andrew M. Cuomo’s agenda for New York focused on stricter firearm laws, banning foam food containers and reining in rising Medicaid costs that had helped create a $6 billion budget gap. This year, the governor’s annual State of the State address revolved around how to remedy a public health crisis and reduce a record $15 billion deficit.

In his first of four presentations this week, the governor gave an overview of his seven-point plan. It included: curtailing the pandemic, vaccinating a majority of New Yorkers, alleviating the fiscal crisis, reopening the economy, sketching lasting recovery plans, shifting to green energy and addressing systemic injustice.

“We will win the Covid war,” Mr. Cuomo said during his speech. “And we will learn and grow from the experience.”

[With New York in crisis, the governor focuses on finances and citizens’ health.]

“We must defeat Covid”

Amid a surging second wave, Mr. Cuomo plans to bolster every front against the coronavirus, from the production of medical supplies to the distribution of vaccine.

One of his vows includes incentivizing local businesses to manufacture essential products, rather than relying on companies overseas. Another is to create a state public health corps of 1,000 fellows and a program to train 100,000 citizens as health care emergency volunteers. Mr. Cuomo also plans to expand rapid-testing sites and telemedicine services across the state.

This year, New York is projected to face the largest deficit in state history. To generate at least some new revenue, the governor aims to legalize recreational marijuana and mobile sports betting. He also emphasized that the state needs to increase economic activity now. “The truth is we cannot stay closed until everyone is vaccinated,” Mr. Cuomo said.

The governor also announced New Deal-style programs to invest in transportation and housing projects, and to create more jobs.

Mr. Cuomo said that counties will have to evaluate their police practices by April to receive state funding, a requirement he announced by executive order after last June’s protests.

“There are many new questions to answer,” Mr. Cuomo said. “Does every 911 call require an armed police officer to respond? What role should mental health and domestic violence professionals play in public safety? What is the transparency and disciplinary policy? What is the use-of-force policy?”

The governor added that public safety is a greater priority for New York City, which has seen a stark rise in shootings. “If the attractions of a city are reduced and crime is increased, urban decline is inevitable,” Mr. Cuomo said.

Mr. Cuomo made it clear that much of his plan will need help from the federal government. One of those goals is to vaccinate between 70 and 90 percent of all New Yorkers, which can only happen if Washington distributes more vaccine supplies to the state, he said.

“We only receive 300,000 doses per week,” Mr. Cuomo said. “At this rate it will take us 14 weeks just to receive enough dosages for those currently eligible.”

New York will also need a federal bailout and other friendly federal measures to alleviate the fiscal crisis caused by the pandemic, the governor said. “This is a national challenge, it is a war,” Mr. Cuomo said. “And like every war before, it must be financed by Washington.”

A Manhattan couple has been accused of falsifying positive coronavirus test results to delay a criminal trial. [Newsday]

At least one member of the New York Police Department is under investigation for possible involvement in last week’s U.S. Capitol siege. [Gothamist]

And finally: Learn about emojis

Emojis have vastly shifted how we communicate digitally: They can, for instance, emphasize an abbreviated text to a friend (“OMG 😱”) or replace words (“Want to get 🍕 for lunch?”).

But who decides what emojis — emoji is Japanese for “picture character” — are available, and what does that process look like?

The Museum of Food and Drink in Brooklyn is hosting a virtual event about the documentary “The Emoji Story.” The 2019 film explores the private consortium that approves new emoji offerings and the push to make the growing number of emojis more representative, among other topics.

“We didn’t necessarily know what was going to be happening in the emoji world when we first started talking about this,” Martha Shane, one of the film’s directors, said in an interview. “But as we sort of committed to making the film and got into production, there were just these really powerful stories.”

Tonight at 8 p.m. in the museum’s virtual event, there will be a Zoom conversation among some of the people who have lobbied for new and varied emojis: Jennifer 8. Lee, the producer of “The Emoji Story” and a former Times journalist, who sought the dumpling, hijab and interracial couple emojis; Yiying Lu, the artist behind the dumpling and bubble tea emojis; Sebastian Delmont, a software developer who proposed the olive and arepa emojis (categorized under flatbread); and Clint Adams, who proposed the garlic and onion emojis.

“So, if you think about that, one of the first ways these kids are going to communicate through text — texts being broadly defined — is through a punching emoji to, like, Grandma. And that’s very powerful, right?”

Register for the Zoom conversation ($15) here. A link to watch the movie is included.

Metropolitan Diary: On the B9

After boarding a B9 bus in Brooklyn, I noticed a woman having a loud FaceTime conversation.

She was smiling and gesturing as if she were talking to whoever was on the other end of the call in person.

I had my headphones in and was listening to an audiobook, so I wasn’t really aware of how loudly she was speaking until she got to her stop.

As she got off the bus, the other passengers burst into a round of applause.

Second parent gets four-month sentence in US college scandal

3 Visitors Banned From Yellowstone After Cooking Chickens in Hot Spring