Ghostly white strollers were parked outside City Hall in Lower Manhattan to mourn a 3-month-old girl killed in her stroller on a Brooklyn sidewalk in a crash that the authorities say was caused by a reckless driver.

The strollers — accompanied by bouquets of yellow flowers and lit candles — were a stark rebuke to Mayor Bill de Blasio.

When Mr. de Blasio took office nearly eight years ago, one of his most ambitious promises was to tame New York City’s deadly streets, where nearly 300 people had been killed in traffic deaths just the year before. “We refuse to accept the loss of children, parents and neighbors as inevitable,” the mayor declared in 2014. “We are focusing the full weight of city government to prevent fatalities on our streets.”

The city has not delivered on its pledge. As Mr. de Blasio gets ready to step down in January, the streets are more dangerous than they were when his tenure began. Traffic deaths have surged this year to their highest level in nearly a decade.

Every three days on average, a car kills another pedestrian.

At least 189 people — including 87 pedestrians and 12 cyclists — have been killed by crashes on city streets through Sept. 14, up nearly 26 percent from the same period last year and the highest number of deaths in that period since 2013, according to city records.

“It’s a real failure of leadership that his final year in office is ending with more traffic deaths than the first,” said Danny Harris, the executive director of Transportation Alternatives, an advocacy group.

The carnage has devastated families and friends, unleashed a torrent of anger directed at City Hall and the Police Department, and fueled an endless succession of candlelight vigils.

The lives lost include Brandon Davis, a 41-year-old wardrobe stylist, who was hit by a driver with a suspended license in July on a Brooklyn street he had crossed thousands of times. The driver was arrested and charged with aggravated unlicensed operation of a vehicle, a misdemeanor that carries a maximum of six months in jail. 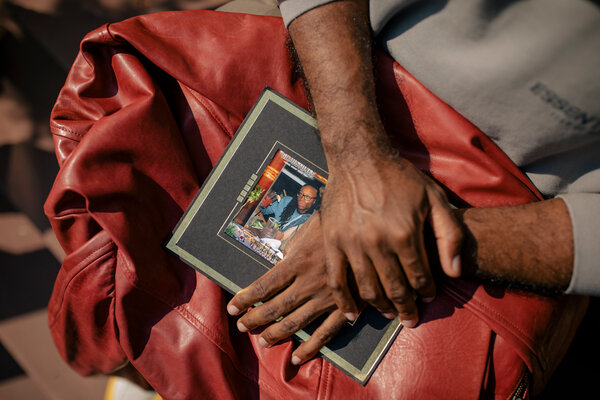 Jeffrey Williamson, 71, an advertising executive and experienced cyclist, was killed in June in a crash with a post office truck driver while riding his cherished vintage Italian bike home for dinner along Central Park. Law enforcement officials said they were still investigating and no one had been charged.

“My husband is dead and a lot of other people have died on the streets this year and it’s only getting worse,” said Mr. Williamson’s wife, Christopher Brimer.

Yet despite the explosion of traffic violence, the police are doing far less enforcement: the number of traffic violation tickets issued in the first six months of this year plunged by more than 50 percent from the same period in 2019.

The surging traffic deaths, street safety experts say, have been propelled by more speeding and reckless driving as people have become emboldened by lax enforcement and emptier roads in some parts of the city during the pandemic. But the city has also come under fire for not moving aggressively enough to carve out safe spaces, including more bicycle lanes.

There are also many more cars on the city’s roads, increasing the possibility of crashes. Between September 2020 through the end of August, the number of newly registered vehicles soared by more than 120,000 compared with the previous 12-month period, according to state records.

City and state officials have taken some steps to target reckless drivers, including creating a sprawling citywide network of nearly 1,400 automated speed cameras in school zones.

Mr. de Blasio has also called on state lawmakers to pass a package of traffic safety bills that takes more aggressive action on dangerous driving, including turning on the school-zone cameras 24 hours a day, seven days a week, instead of only during school hours, which is the current rule.

Tyrik Mott, 29, the driver accused of killing the 3-month-old baby, Apolline Mong-Guillemin, in September, had a suspended driver’s license and two prior traffic arrests, including reckless driving and aggravated unlicensed operation of a motor vehicle, according to the police. He was driving a car that had racked up multiple speeding tickets from automated cameras.

Mr. Mott was arrested and charged with several crimes, including reckless manslaughter.

Mr. de Blasio has defended his street safety record, pointing to stronger enforcement and street redesigns to make them less perilous. City officials cited other safety measures like lowering of speed limits on high-crash corridors and the addition of several dozen miles of protected bike lanes during the pandemic.

“All of these things are having an impact,” Mr. de Blasio told reporters recently.

He acknowledged the rising death toll, but argued that the pandemic had “disrupted a huge amount of progress.”

Still, critics questioned how serious the city was about protecting people from drivers given the lower level of policing.

The police this year have issued 255,332 tickets for traffic violations through June, or less than half of the 540,059 tickets in the same period in 2019, according to police data. One category of violations that has been a focal point of the city’s traffic campaign — failing to yield the right of way to pedestrians — also fell by more than half to 14,980 from 32,383 during that period.

“Everyone has noticed there’s been less police enforcement,” said City Councilman Ben Kallos, who represents the Upper East Side. “We’re like, ‘Where are the police?’”

Mr. de Blasio, a Democrat, once set a goal of eliminating all traffic deaths by 2024 with an ambitious policy, called Vision Zero, modeled after a Swedish approach.

Besides enforcement and reduced speed limits, the policy also emphasized the re-engineering of streets, such as narrowing traffic lanes to slow down cars, re-timing walk signals to give pedestrians a head start and removing parking spots near intersections to make crosswalks more visible to drivers.

The early results were promising, with a five-year decline in traffic deaths to 205 in 2018, the lowest level in more than a century.

But since then there has been a reversal. Traffic deaths increased to 220 in 2019, and increased again to 243 in 2020. One factor, officials say, has been the growing popularity of larger vehicles, like S.U.V.s and pickup trucks that tend to cause more grievous injuries.

Roughly one-third of all vehicles in fatal crashes this year through mid-September involved S.U.V.s compared with about one-quarter of vehicles for the same time in 2014.

Transportation advocates say Mr. de Blasio should move more quickly on safety improvements that might have saved more lives during the pandemic.

A signature project, the redesign of Queens Boulevard, which had eight traffic deaths in 2013 alone, started in 2015 and is set to be completed next month. Five people have been killed in traffic crashes on Queens Boulevard since 2017, including a pedestrian in March.

Transportation advocates say the city has also taken too long to complete safety improvements on the Grand Concourse in the Bronx, a major artery where five people have been killed in crashes since 2019.

“Mayor Bill de Blasio has failed to scale these improvements that he knows works,” said Mr. Harris of Transportation Alternatives.

A new program targeting the most reckless drivers has yet to start after it was delayed by budget cuts and the required in-person classes that city officials said could not be easily adapted online.

The program allows the city to seize vehicles with 15 or more school-zone speed camera violations or five or more red-light camera violations during a 12-month period unless the registered owner or operator takes a driver accountability course.

“We have not moved here with the sense of urgency that it demands,” said City Councilman Brad Lander, who proposed the program in 2018, after a driver killed two young children near his Brooklyn office.

Streets have grown more perilous during the pandemic beyond New York. Nationally, traffic deaths rose 10.5 percent to 8,730 in the first three months of 2021 from 7,900 deaths in the same period in 2020, according to the National Highway Traffic Safety Administration.

“Covid was not the only pandemic,” Hank Gutman, New York City’s transportation commissioner, said in an interview. “There was a second pandemic at the same time of speeding and reckless driving, not just in New York but all across the country.”

Even with traffic deaths on the rise, New York’s fatality rate was still three to four times lower than the national average, according to Erick Guerra, an associate professor of city and regional planning at the University of Pennsylvania. “In some ways, Vision Zero is aspirational,” Professor Guerra said. “Even in cities that have success, you still see traffic fatalities.”

Mr. de Blasio insisted that Vision Zero will eventually transform the city’s unruly streets. “It is the right model,” he told reporters. “It’s changed the behavior of drivers and we need to do a lot more to build upon it.”

It is too late for Mr. Davis, the pedestrian who was killed in his Brooklyn neighborhood by a driver with a suspended license.

Mr. Davis had started walking to stay in shape during the pandemic and was soon escorting neighbors to doctor’s appointments, walking their dogs and delivering home-cooked meals, said his roommate, Fredrick Williams.

“You take it for granted that you walk in New York,” said Mr. Williams. “And it’s dangerous.”