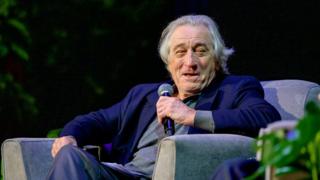 A production company owned by US actor Robert De Niro is suing a former employee who it accuses of misusing funds and watching Netflix at work.

The lawsuit claims she spent lavishly on personal expenses, used De Niro’s airline points for personal travel and rarely came to the office.

According to Ms Robinson’s LinkedIn profile she joined the company in 2008.

In 2017 she was promoted to vice-president of production and finance at Canal Productions. Her role included assuring that company funds were not misused.

“Robinson’s position required Mr De Niro to place full faith, trust and confidence in her that she would carry out her duties and responsibilities in Canal’s best interests, mindfully overseeing the finances and other employees,” the lawsuit said.

She left the company in April amid concerns at work of “corporate sabotage,” the lawsuit stated.

Ms Robinson has not publicly commented on the case, and has not responded to a BBC request.

According to the lawsuit, she spent “astronomical amounts of time” watching Netflix during work hours.

In January, she is accused of watching 55 episodes of Friends over a four-day period. In March she allegedly watched 20 episodes of Arrested Development and 10 episodes of Schitt’s Creek.

“Watching shows on Netflix was not in any way part of or related to the duties and responsibilities of Robinson’s employment and, on information and belief, was done for her personal entertainment, amusement and pleasure at times when she was being paid to work,” the suit contended.

She is also accused of making thousands of dollars of unauthorised purchases at expensive grocery stores and restaurants, as well as on taxis and Uber trips.

She later drafted a recommendation letter for herself, but De Niro refused to sign it, according to lawyers for Canal Productions.

De Niro is starring in a Martin Scorsese directed film, the Irishman, alongside actors Al Pacino and Joe Pesci.