CARPINTERIA, Calif. — They call it fresh skunk, the odor cloud or sometimes just the stink.

Mike Wondolowski often finds himself in the middle of it. He may be on the chaise longue on his patio, at his computer in the house, or tending to his orange and lemon trees in the garden when the powerful, nauseating stench descends on him.

Mr. Wondolowski lives a half-mile away from greenhouses that were originally built to grow daisies and chrysanthemums but now house thousands of marijuana plants, part of a booming — and pungent — business seeking to cash in on recreational cannabis, which has been legal in California since January.

“If someone is saying, ‘Is it really that bad?’ I’ll go find a bunch of skunks and every evening I’ll put them outside your window,” Mr. Wondolowski said. “It’s just brutal.”

When Californians voted to legalize recreational marijuana in 2016, there were debates about driving under the influence and keeping it away from children. But lawmakers did not anticipate the uproar that would be generated by the funk of millions of flowering cannabis plants.

As a result of the stench, residents in Sonoma County, north of San Francisco, are suing to ban cannabis operations from their neighborhoods. Mendocino County, farther north, recently created zones banning cannabis cultivation — the sheriff’s deputy there says the stink is the No. 1 complaint. 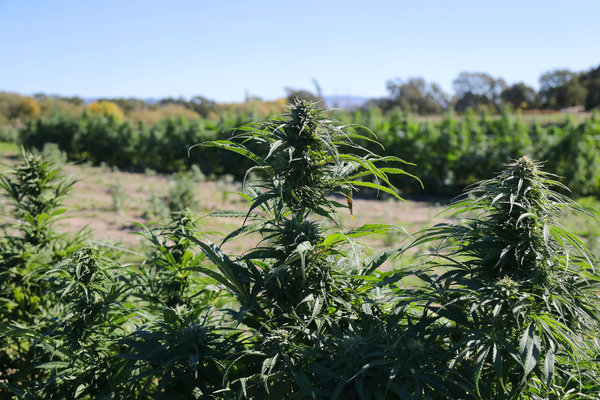 In Santa Barbara County, cannabis growers confronting the rage of neighbors are spending hundreds of thousands of dollars installing odor-control systems that were designed for garbage dumps.

The smell from commercial cannabis farms, which brings to mind a mixture of rotting lemons and sulfur, is nothing like the wafting cloud that might hover over a Phish show, pot farm detractors say.

“It’s as if a skunk, or multiple skunks in a family, were living under our house,” said Grace Guthrie, whose home sits on the site of a former apple orchard outside the town of Sebastopol. Her neighbors grow pot commercially. “It doesn’t dissipate,” Ms. Guthrie said. “It’s beyond anything you would imagine.”

When cannabis odors are at their peak, she and her husband, Robert, sometimes wear respirators, the kind one might put on to handle dangerous chemicals. During Labor Day weekend, relatives came to stay at the house, but cut short their visit because they couldn’t stand the smell.

“I can’t be outside more than 30 minutes,” Mr. Guthrie said of peak odor times, when the cannabis buds are flowering and the wind sweeps the smell onto his property. “The windows are constantly closed. We are trapped inside. There’s no escape.”

After nearly one year of recreational sales in California, much of the cannabis industry remains underground. Stung by taxes and voluminous paperwork, only around 5 percent of marijuana farmers in the state have licenses, according to Hezekiah Allen, the executive director of the California Growers Association, a marijuana advocacy group. Sales of legal cannabis are expected to exceed $3 billion this year, only slightly higher than medical marijuana sales from last year. Tax revenues have been lower than expected, and only about one-fifth of California cities allow sales of recreational cannabis. The dream of a fully regulated market seems years off.

The ballot measure legalizing recreational marijuana passed in 2016 with a comfortable majority of 57 percent. Many of those complaining about cannabis odors say they were among those who supported it. They just don’t want it stinking up their property, they say.

“Just because you like bacon doesn’t mean you want to live next to a pig farm,” said Lynda Hopkins, a member of the Sonoma County Board of Supervisors, whose office has been inundated with complaints about the smell.

Marijuana businesses in Carpinteria recently donated $28,000 worth of lab equipment to Carpinteria High School, according to Philip Greene, the chief of operations for Ever-Bloom, a cannabis producer that helped coordinate the donation. The high school is flanked by cannabis greenhouses that have sent odors wafting in. In the past two years, students have complained of headaches, parents have grown angry and the high school has had to warn visiting sports teams that they might encounter the odor.

The donation has not yet been made public, but is seen by some as an effort to offset the damage done by the stench. In an interview, Maureen Foley Claffey, a member of the Carpinteria School Board, said it would send a “confusing and problematic” message to students to accept it. Ms. Claffey lashed out at the superintendent, Diana Rigby, for soliciting donations from the cannabis industry at a time when members of the community are battling the stink.

“Are we that desperate for cash that we are willing to take it from anyone without regard to the source and the message?” she said. “I guess money talks.”

Ms. Rigby, the superintendent, did not return phone calls or email requesting comment.

In Sonoma County, hearings on cannabis ordinances at the board of supervisors overflow with representatives from the cannabis industry, who wear green, and angry residents, who wear red.

Of the more than 730 complaints Sonoma County has received about cannabis this year, around 65 percent are related to odor, according to Tim Ricard, the county’s cannabis program manager.

“There’s been a tremendous amount of tension in the community,” said Ms. Hopkins, the Sonoma supervisor. “If I had to name an ice-cream flavor for cannabis implementation it would definitely be rocky road.”

Cannabis executives recognize that pot grows can be odorous, but say their industry is no different from others that produce smells.

“You have a smell issue that sometimes can’t be completely mitigated,” said Dennis Hunter, a co-founder of CannaCraft, a large marijuana business based in Santa Rosa in Sonoma County. “But we have dairy farms here in the area or crush season for the vineyards — there’s agricultural crops, and a lot of them have smells.”

Britt Christiansen, a registered nurse who lives among the dairy farms of Sonoma County, acknowledges that her neighborhood smells of manure, known locally as the Sonoma aroma.

But she says she made the choice to live next to a dairy farm and prefers that smell to the odor that drifted over from the marijuana farm next door to her house.

“We opened the door and the smell kicked us in the face,” Ms. Christiansen said. Her neighbors banded together in October and sued the operators of the pot business; the case is ongoing.

One problem for local governments trying to legislate cannabis odors is that there is no objective standard for smells. A company in Minnesota, St. Croix Sensory, has developed a device called the Nasal Ranger, which looks like a cross between a hair dryer and a radar gun. Users place the instrument on their nose and turn a filter dial to rate the potency on a numerical scale. Charles McGinley, the inventor of the device, says a Level 7 is the equivalent of “sniffing someone’s armpit without the deodorant — or maybe someone’s feet — a nuisance certainly.”

A Level 4, he said, is the equivalent of a neighbor’s freshly cut grass. “It could still be a nuisance, but it wouldn’t drive you away from your front porch,” Mr. McGinley said.

Standing next to a flowering cannabis bud, the smell would easily be a Level 7, Mr. McGinley said.

The Nasal Ranger is in use in Colorado, the first state to legalize recreational marijuana, but California counties and cities are still struggling with the notion that smells are subjective.

Ever-Bloom in Carpinteria is one of a number of marijuana businesses that have invested hundreds of thousands of dollars to mitigate the stink. Two previous system failed, but the current one, modeled on devices used to mask the smell of garbage dumps, sprays a curtain of vapor around the perimeter of the greenhouses. The vapor, which is made up of essential oils, gives off a menthol smell resembling Bengay.

Dennis Bozanich, a Santa Barbara County official charged with cannabis implementation who has become known as the cannabis czar, says the essential oil odor control has been largely successful. But not every grower can afford to install it.

On weekends, Mr. Bozanich becomes a cannabis odor sleuth, riding his bicycle through Carpinteria sniffing the air for pot plants. He recently drove through the area with a reporter, rolling down the windows on a stretch of road with cannabis greenhouses. He slowed the car and puzzled over where a cannabis odor was coming from.

“I’ve got one stinky location right here and I can’t quite figure it out,” he said.

His description of the stink?

Coronavirus Sweeps Through Detroit, a City That Has Seen Crisis Before

The churchgoing patriot who spied for China