In the early evening of May 13, 1985, the police flew a helicopter over a crowded West Philadelphia neighborhood and dropped a bomb on the rowhouse where members of the communal, anti-government group MOVE lived.

The bomb started a fire, and the police ordered firefighters to let it burn. Eleven people, including five children, were killed, and more than 60 nearby homes were destroyed.

The pain of that day never left for many Philadelphians, a scarring memory of how the police caused a middle-class, mostly Black neighborhood to burn.

This week, the anguish came surging back when officials at two Ivy League universities acknowledged that anthropologists had been passing the bones of a young bombing victim between them for the last 36 years. The bones were also featured in a video for an online course, “Real Bones: Adventures in Forensic Anthropology,” taught by a University of Pennsylvania professor and offered by Princeton.

“I was sickened and almost in shock,” said Jamie Gauthier, a member of the Philadelphia City Council, which apologized for the bombing last year. “It’s just an unbelievable amount of disrespect for Black life and an unbelievable amount of disrespect for a child who suffered trauma, a child who was killed by her own government.”

Mike Africa Jr., an activist, writer and member of MOVE who was 6 when the bomb was dropped, said he and others in the group did not know the bones — parts of a burned femur and a pelvis — had been used in the video and kept for decades by anthropologists.

He said he learned about the bones only days ago from an activist, Abdul-Aliy Muhammad, who wrote an opinion piece published on Wednesday by The Philadelphia Inquirer calling for the bones to be returned to MOVE. The same day, the news site Billy Penn reported that the remains had been kept in a cardboard box on a shelf.

“Anger, fury, disappointment, sadness,” Mr. Africa said, describing his reaction. “It’s like this never ends and no matter how much time passes, and you hope that things can get to a place where you can begin to heal some, it’s right back up in your face. I haven’t cried this many consecutive days since 1985.”

The bombing has for decades been held up as an example of the city’s mistreatment of Black people. In 1988, a grand jury cleared officials of criminal liability for the death and destruction resulting from the bombing.

“It remains a festering injustice because there was no accountability for those who dropped the bomb,” said Linn Washington, a journalism professor at Temple University who covered the bombing as a reporter. 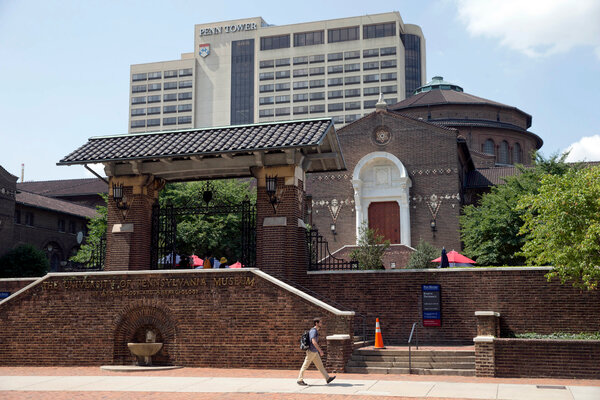 Christopher Woods, the director of the Penn Museum, said that museum workers knew for years that the bones of a MOVE bombing victim had been kept there. Those people told him about the bones last Friday, he said, in the context of another controversy involving different bones at the museum.

This month, the museum and the University of Pennsylvania apologized for the decadeslong possession of hundreds of skulls, including those of enslaved people, that had been collected by a 19th-century physician whose research was used to justify white supremacist views.

The museum said it would repatriate the skulls whenever possible.

The bones of the bombing victim had been repeatedly analyzed over the years in an effort to positively identify the person they belonged to, Dr. Woods said.

“I would apologize for any trauma this has reintroduced,” Dr. Woods said. “That certainly wasn’t our intention. Our intention was to help solve this case and restore the personhood and identity and dignity of this individual.”

Some MOVE members and city leaders said the bones of the bombing victim should have been returned years ago. Professor Washington said Penn should offer a “profuse apology” and compensation.

“This was a homicidal act and now this homicidal act has been compounded by the behavior at Penn,” Professor Washington said. “I saw this as a repeat of colonialism, where people’s lives were misappropriated.”

Two anthropologists who analyzed the bones — Alan Mann, now a professor emeritus at Princeton, and Janet Monge, the curator-in-charge of the Penn Museum’s Physical Anthropology Section — were not able to positively identify the victim, according to the museum.

The bones, according to the museum and Princeton, are currently in Dr. Mann’s possession. Dr. Woods said the museum returned the bones to him on Sunday because the Philadelphia Medical Examiner’s Office had originally given them to him for forensic analysis in 1985.

Dr. Mann and Dr. Monge did not respond to messages this week.

Dr. Woods, who became director of the Penn Museum on April 1, said he hopes the bones can be returned to MOVE. “We are working on it now,” he said. “It’s a complex issue. We all want to do the right thing.”

According to the museum, Dr. Mann was originally acting as an “independent forensic anthropologist,” when he received the bones in 1985. At the time, he was also a professor at the University of Pennsylvania.

After the medical examiner failed to make a positive identification, the office gave the bones to Dr. Mann in the hopes that he could eventually link them to a victim, the museum said. In 2001, when Dr. Mann became a professor at Princeton, the bones were moved there, the museum said.

In 2016, a year after Dr. Mann retired from Princeton, the remains returned to the Penn Museum for testing with new technology by Dr. Monge. She was unable to make a positive identification, the museum said.

Dr. Monge also used the bones in a video for the online forensics course offered by Princeton. In the video, she describes the history of the bombing and signs of damage on the bones, and a student says she concluded that the bones belonged to a preteen or teenage girl.

Princeton said in a statement on Friday that “out of respect for the victims of the MOVE bombing and their families we have suspended the online course.”

The university said, “We have no reason to believe that anything improper is currently taking place at Princeton.” It added, “We are reviewing our protocols and policies for the handling of any human remains in teaching and research to ensure they are consistent with the highest professional practice and ethical standards.”

A spokeswoman for Jim Kenney, the mayor of Philadelphia, said he was recently made aware of the “unfortunate situation” involving the bones. “He is extremely disturbed by the mishandling of the victims’ remains,” said the spokeswoman, Deana Gamble.

She said “any future placement of these remains should be determined in concert with the victims’ families.”

The bones, Mr. Africa said, may belong to Delisha Africa or Tree Africa, who were 12 and 14 when they were killed, according to city officials. He said that Delisha taught him how to be mischievous and to get away with it. And Tree, he said, loved climbing trees.

“I knew those kids,” Mr. Africa said. “They’re not an imagination or a hallucination. There are memories.”

Calgary councillor found to have breached council code of conduct, refuses to apologize