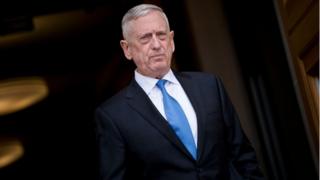 The abrupt resignation of Defence Secretary Jim Mattis has alarmed an already tense Capitol Hill, causing lawmakers on both sides to speak out.

Senators Mitch McConnell and Marco Rubio called the move distressing and damaging to the US on the world stage.

Gen Mattis appeared to clash with Mr Trump over his decision to withdraw troops from Syria.

In his resignation letter, Gen Mattis, 68, said the president had the right to appoint someone “whose views are better aligned with yours”.

The announcement of his departure came amid two major military decisions Gen Mattis had opposed: withdrawing troops from Syria and reducing US presence in Afghanistan.

US allies were not consulted or informed ahead of time about the president’s decisions, US media reported.

The respected general will leave the job in February, though it remains unclear who President Donald Trump has in mind to replace him.

On Capitol Hill, Gen Mattis’ resignation – and his reason for doing so – shocked lawmakers on both sides of the aisle.

“Secretary Mattis has been an island of stability amidst the chaos of the Trump administration,” he said.

This is scary. Secretary Mattis has been an island of stability amidst the chaos of the Trump administration. As we’ve seen with the President’s haphazard approach to Syria, our national defense is too important to be subjected to the President’s erratic whims. https://t.co/9qPluSGLUc

A Secretary of Defense quitting over a public disagreement with a President whose foreign policy he believes has gone off the rails is a national security crisis. No way around it.

Senator Jack Reed of Rhode Island, ranking member on the Armed Services committee, said, “President Trump is leading the country in the wrong direction and Secretary Mattis isn’t willing to go along with it”.

[email protected] pulls no punches in his #MattisResignation statement: "President Trump is leading the country in the wrong direction and Secretary Mattis isn’t willing to go along with it.” pic.twitter.com/dBU64KjDyA

House Minority Leader Nancy Pelosi also described Gen Mattis as a “comfort to many” who were concerned about the Trump presidency.

General Mattis was a comfort to many who were concerned about the path the Trump Admin would choose to take. His resignation letter is defined by statements of principle — principles that drove him to leave the Administration. All of us should be concerned at this time.

And Representative Adam Schiff of California, ranking member of the House Intelligence Committee, said the White House would “not see his like again while Trump remains in office”.

Old Marines never die, but they do resign after the President ignores their advice, betrays our allies, rewards our enemies, and puts the nation’s security at risk. Turn out the lights when Mattis leaves; we will not see his like again while Trump remains in office. https://t.co/fKUTe5nPIR

Former vice-president Joe Biden also weighed in, saying Gen Mattis’ presence would be missed and his exit makes it “clear this administration has abandoned those core American beliefs”.

Retired Army Gen Stanley McChrystal, the former top US commander in Afghanistan, told CNN: “The kind of leadership that causes a dedicated patriot like Jim Mattis to leave should give pause to every American.”

Even top lawmakers from Mr Trump’s own Republican Party have criticised the administration over Gen Mattis’ departure.

Senate Majority Leader Mitch McConnell said he was “distressed” to hear the resignation was reportedly due to “sharp differences” with the president on “key aspects of America’s global leadership”.

My statement on Secretary Mattis pic.twitter.com/0n6Hye3096

Florida Senator Marco Rubio, who ran against Mr Trump for the Republican nomination in 2016, said the letter “makes it abundantly clear that we are headed towards a series of grave policy errors which will endanger our nation, damage our alliances & empower our adversaries”.

Just read Gen. Mattis resignation letter. It makes it abundantly clear that we are headed towards a series of grave policy errors which will endanger our nation,damage our alliances & empower our adversaries. 1/2 pic.twitter.com/ztc0Yihccn

Senator Lindsey Graham, who has been a vocal critic of the administration’s decisions to withdraw troops in Syria and Afghanistan, tweeted his “great sadness” about the news, saying Gen Mattis had “provided sound and ethical military advice to President Trump”.

On Friday, Mr Graham also called for Congress to hold hearings regarding Mr Trump’s military decisions “to understand implications to our national security”.

He added Gen Mattis’ departure was “an act of patriotism, standing for our American principles above all else”.

I admire Secretary Mattis. His service has been one of honor & respect. His resignation is an act of patriotism, standing for our American principles above all else.

And Nebraska Republican Senator Ben Sasse, who has criticised the president before, said it was a “sad day for America because Secretary Mattis was giving advice the president needs to hear”, US media reported.

Other Republicans have not been as dire in their reactions, expressing disappointment while urging the president to find a capable replacement, US media reported.

US finalises rule to slap duties on countries that undervalue currencies