The lawyer for the former Minneapolis police officer convicted of murdering George Floyd filed a motion on Tuesday asking for a new trial on several grounds, including jury misconduct.

The lawyer, Eric Nelson, said that his client, Derek Chauvin, did not receive a fair trial for several reasons, including the judge’s decisions to not sequester the jury during the trial, to not change the location of the proceedings and to not grant a new trial because of publicity that included the intimidation of the defense’s expert witnesses. Mr. Nelson also wrote “that the jury committed misconduct, felt threatened or intimidated, felt race-based pressure during the proceedings, and/or failed to adhere to instructions during deliberations.”

There were no detailed arguments provided in the motion, which was expected and is a common step following a criminal conviction. It remains to be seen how effective any of the arguments will be because courts have set a high bar for overturning jury verdicts.

The motion was filed as one of the jurors came under scrutiny — mostly from conservative commentators online — for a photo from last year that showed him attending the 57th anniversary of the March on Washington, when the Rev. Dr. Martin Luther King Jr. gave his famous “I Have a Dream” speech.

Before the trial, all potential jurors were required to fill out a questionnaire that asked whether they or anyone close to them had “participated in protests about police use of force or police brutality.”

Brandon Mitchell, the only juror to speak publicly after convicting Mr. Chauvin, told The Star Tribune, a Minneapolis newspaper, this week that he had answered no to the question. Some conservatives have seized on the revelation as a possible reason that the verdict might be overturned, but legal experts said it was highly unlikely that Mr. Chauvin would win an appeal on that issue.

Mr. Mitchell, who did not respond to requests for comment, told The Star Tribune that he was at the Washington rally to honor Dr. King and the fight for civil rights, and that he did not view it as a march against police brutality.

In questioning before the trial, Mr. Mitchell, 31, indicated that he had a favorable impression of Black Lives Matter. Mr. Nelson, the lawyer, asked Mr. Mitchell what he had meant when he wrote on the questionnaire, “Black lives just want to be treated as equals and not killed or treated in an aggressive manner simply because they’re Black.”

Mr. Mitchell told Mr. Nelson that he saw Black Lives Matter simply as a statement of fact that he supported.

Ultimately, the question for the trial judge and the appellate court to consider would be whether Mr. Chauvin got a fair trial, said Mary Moriarty, a defense lawyer in Minneapolis.

“This in and of itself, I don’t see making a difference,” she said. 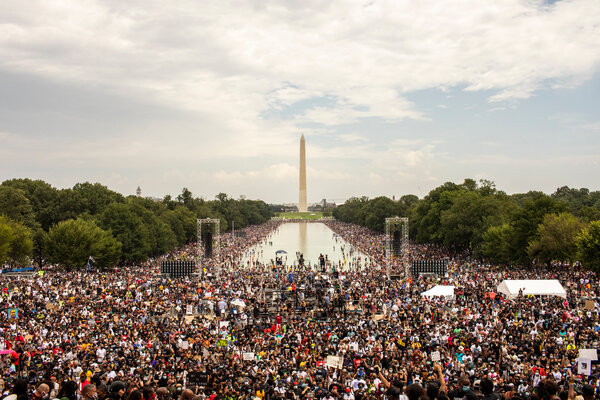 In an email, Mr. Nelson declined to comment on the questions surrounding Mr. Mitchell, which were not specifically mentioned in the motion filed on Tuesday.

During jury selection, Mr. Nelson read an explanation Mr. Mitchell had written on his questionnaire that said he wanted to serve on the jury “because of all the protests and everything that has happened after the event, this is the most historic case of my lifetime and I would love to be a part of it.”

“How did the protests and things that have happened afterward have to do with this, the facts and evidence in this case?” Mr. Nelson asked.

In the social media photo that surfaced this week, Mr. Mitchell, smiling alongside two other men, is wearing a T-shirt with an image of Dr. King and the phrase, “Get Your Knee Off Our Necks.”

The anniversary event in Washington, promoted by the Rev. Al Sharpton and his National Action Network, the N.A.A.C.P. and other groups, was known as the “Get Your Knee Off Our Necks” rally, a reference to the more than nine minutes that Mr. Chauvin knelt on Mr. Floyd’s neck before he died. Mr. Floyd’s relatives were among the speakers at the rally.

Judge Peter A. Cahill, who oversaw the Chauvin trial, could convene a hearing to question Mr. Mitchell and probe whether he lied on his questionnaire. But even if Judge Cahill determined that Mr. Mitchell intentionally misled the court on his questionnaire, that alone likely would not be enough to throw out the verdict, legal experts said. The 12 jurors took about 10 hours to convict Mr. Chauvin of all three charges he faced: second- and third-degree murder and second-degree manslaughter.

Jurors are allowed to have opinions, legal experts said, but they have to be willing to set them aside and agree to decide a case based on the evidence. For example, a juror in the trial of Paul Manafort, an adviser to former President Donald J. Trump, told Fox News that even though she was a strong supporter of Mr. Trump, she had voted to convict Mr. Manafort.

Experts also said that given the evidence in Mr. Chauvin’s case, a court would be hard pressed to throw out the jury’s decision. Mr. Chauvin could receive decades in prison during his scheduled sentencing next month.

“Given that the evidence was pretty overwhelming, it would take a lot for an appellate court to reverse his conviction,” Ms. Moriarty said.

Benjamin Brafman, a criminal defense lawyer in New York who did not have any involvement in the Chauvin case, said the court would also be cognizant of the public view of the case.

“It’s been my experience that if you represent a really notorious individual in a trial that’s been watched by the entire world, you would have to have a really powerful confluence of legal issues for any appellate court to give it traction,” Mr. Brafman said.

During the trial, Mr. Nelson argued for a mistrial because jurors were not being sequestered during the entire proceeding; he was concerned that they may be influenced by outside coverage of the case, even though the judge had instructed them not to read about the trial. Mr. Nelson pointed specifically to comments made by Representative Maxine Waters of California about the need for protesters to be more confrontational if Mr. Chauvin were acquitted.

Mr. Nelson also raised concerns that the city of Minneapolis reached a $27 million settlement with Mr. Floyd’s family right before the trial opened.

But courts generally have set a high threshold for issues with jurors to undo a verdict.

After voting to convict the son of the New York socialite Brooke Astor on fraud charges in 2009, a juror in that case told a defense investigator that she felt threatened into voting guilty after another juror flashed what she thought were gang signs at her and moved menacingly toward her in the deliberations room. That formed the basis of what was ultimately an unsuccessful appeal.

A federal appeals court did overturn the death sentence of the man convicted of carrying out the bombing attacks at the Boston Marathon in 2013, ruling that the trial judge did not probe the jurors for bias thoroughly enough.

Lawyers for the bomber, Dzhokhar Tsarnaev, had pointed to 22 Twitter posts and retweets by the jury’s forewoman — one referring to Mr. Tsarnaev as “that piece of garbage” — that had not been voluntarily disclosed as part of jury screening. The Supreme Court is expected to decide whether to reinstitute his death sentence.

The optics of Mr. Mitchell’s T-shirt and attendance at the march were “not great,” given how much of a flash point the Black Lives Matter movement had become, said Melissa Murray, a law professor at New York University. But that may not be enough to persuade a court that Mr. Chauvin did not receive a fair trial, she said.

“Throwing out a jury verdict under those circumstances is probably a long shot,” she said. “Long shots are what appeals are made of.”

There have been scattered reports of paramilitary groups trying to interfere with voting.

Changes to job leave provisions in Saskatchewan now in effect