Home » Americas » Derek Chauvin’s lawyers want to humanize him. Some witnesses described him as cold and heartless. 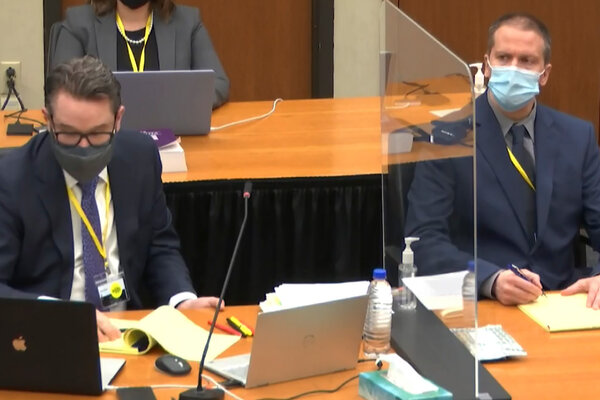 Clad in a light-blue surgical mask and a suit and tie, Derek Chauvin betrayed little emotion on the second day of his trial as witnesses described him as cold and heartless. He scribbled notes diligently on a legal pad, stole glances at the jury and stood when identified by witnesses.

Attempts by the defense to humanize Mr. Chauvin, the former police officer accused of second-degree murder in the death of George Floyd, are central to their effort to portray him as a responsible person who was only doing his job, said Justin Hansford, a law professor at Howard University’s law school. That’s part of a strategy to mitigate the “heinous” video that shows Mr. Chauvin with his knee on Mr. Floyd, he said.

A defense lawyer will advise clients to look empathetic and engaged “even when there are emotional pieces of testimony,” said Mr. Hansford. “The jurors will certainly glance over at him, to look at his engagement.” He added that defendants are often advised not to have any skeptical or hostile reactions. “The position is that you are sorry about what happened to the gentleman but you were doing your job.’'

Mary Fay, a former federal prosecutor who teaches criminal law and criminal proceedings at the University of Washington School of Law, said that the defense strategy appeared to rely on “split-second syndrome.”

“The Supreme Court has recognized that law enforcement officers have to make decisions in the heat of the moment,” she said. “They’ve given police officers a lot of latitude in these judgment calls, including with respect to the use of force.”

Mr. Chauvin’s demeanor — seen in his note taking and professional attire — played into this strategy by making him seem “respectful of procedure” and provided an alternative image for the jury to counter the one of the officer seen in the video. It emphasized that “this is a trained professional with almost two decades of experience who was in a volatile situation,” Ms. Fay said.