A large swath of nursing homes in the United States are poised to receive Covid-19 vaccines beginning Monday, as the country pushes to inoculate some of its most vulnerable citizens and free them from months of confinement.

Nursing homes have felt the brunt of Covid-19’s severity in the United States. At least a third of the country’s more than 305,000 deaths have been reported among residents and employees of nursing homes and other long-term care facilities for older adults, while more than 787,000 staff members and residents have become infected. Most homes have been closed to visitors since the early days of the pandemic, leaving residents feeling lonely and isolated.

Vaccinations started in the United States last week, with health-care workers at the front of the line. The effort has expanded to long-term care facilities as conditions in them have deteriorated anew, with nearly 20,000 cases and an estimated 5,000 deaths reported per week, according to the American Health Care Association and National Center for Assisted Living.

Some states, including West Virginia, Connecticut, Delaware and Florida, began administering vaccines at long-term care facilities last week. The homes are expected to remain locked down until residents’ relatives have been vaccinated.

At The Cedars, a retirement community in Portland, Maine, pharmacists from Walgreens are expected to arrive at 8:30 a.m. Monday to administer vaccines to residents and staff members. “There will be much celebration in the air,” said Katharine O’Neill, the director of operations and communications.

In New York, the state health facilities association — which includes 425 skilled nursing homes and assisted living facilities — has been working with the state and federal governments for about two months to plan how the vaccine will be administered, said Stephen Hanse, the president and chief executive of the association.

Most homes will get the vaccine through CVS Pharmacy or Walgreens, part of a deal struck with the federal government, and residents will probably be vaccinated in their rooms, while staff will receive the doses in separate spaces, Mr. Hanse said.

There will be vaccination celebrations, probably mixed in with holiday festivities. Morale is higher than it has been throughout the pandemic, Mr. Hanse said, because the vaccines give residents hope that they will soon be able to see their loved ones in person after many months of solitude. “One of the things that’s really in play here. too, especially in New York, was the inability for family and loved ones to visit with their family,” he said.

In Fairborn, Ohio, at the Wright Rehabilitation and Healthcare Center, the first doses of the vaccine are scheduled to arrive in the first week of January, Greg Nijak, the executive director of the facility, said.

Preparations have centered on securing vaccine consent forms and disseminating information about the safety of the vaccine. “

Elsewhere, there is trepidation. At the Martha T. Berry Medical Care Facility outside Detroit, a recent survey found that less than half of the staff wanted to take the vaccine. “Our staff is mostly skeptical,” Kevin Evans, the executive director of the facility, said in an email.

The facility has started an information campaign for residents and staff members. Despite the apprehension among employees, residents are eager for the vaccines’ arrival, which the facility is planning to celebrate.

“Though we have multiple FaceTime and Skype and window visits,” Mr. Evans said, “it is not the same as a hug from a son, daughter, or grandchild.” 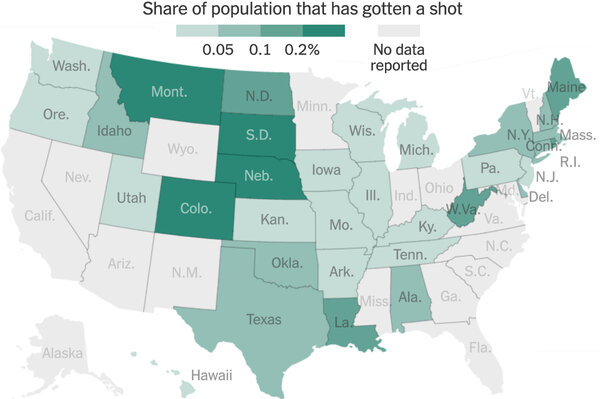 The government is sending enough vaccine for 2.9 million people to receive a first dose. See where people have gotten a shot.