Home » Americas » Dominating Retail? Yes. Reviving a City? No Thanks. 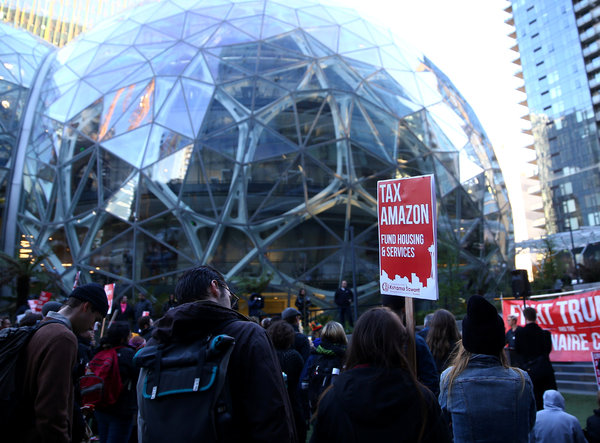 Amazon could have transformed a city. It could have created 50,000 high-paying jobs in a place with higher-than-average unemployment. It could have become the largest employer in a midsize city, or the central player in a new regional tech hub.

But the company that has radically transformed the retail industry has never shown much appetite for remolding cities.

And by announcing Tuesday that it would split its “second headquarters” between New York City and suburban Washington, D.C., Amazon has effectively chosen the lightest footprint possible — not 50,000 new tech jobs in a place where its presence would dominate, but 25,000 each in two booming areas that will handily absorb that growth (and the criticism that comes with it).

That decision suits a company that has long worn its power and size in Seattle awkwardly. And it has been clear since early in its HQ2 search that Amazon wasn’t interested in leveraging its growth for a civic reinvention project.

Several cities explicitly framed their pitch around the appeal that Amazon could become the major local employer, and the catalyst for an urban revival. Baltimore promised the chance to “permanently tie Amazon to the renaissance of one of America’s greatest working-class cities.” Detroit’s proposal suggested that Amazon would further help the city shed “the blue-collar stereotype.” Camden, N.J., pitched itself as “a city rising” — a place Amazon could help lift up.

None of those cities were among the 20 finalists Amazon seriously considered.

“A bunch of cities in their initial proposal proposed that Amazon would be the center of their development strategy,” said Nathan Jensen, a professor of government at the University of Texas at Austin who tracked proposals for HQ2. “But these are the losers.”

Instead, in New York and Washington, Amazon will find not only all the assets a tech company requires, but also some reprieve from the attention its status as the behemoth tech employer within Seattle has given it. In its hometown, Amazon now occupies fully one-fifth of all prime office space.

In announcing the decision on Tuesday, Amazon’s C.E.O., Jeff Bezos, mentioned the company’s desire to “become an even bigger part of these communities.” But that role in New York and Washington will be relatively smaller than if the company had chosen a different kind of home.

In Northern Virginia and environs, even as Amazon grows to 25,000 jobs, the primary industries will long remain government services and defense contracting. In New York, Amazon isn’t even the only big tech company announcing a major expansion in the past week; Google plans to swell in size there, too — albeit in Manhattan rather than Queens.

The ratings agency Fitch shrugged on Tuesday at what it considered the “muted impact” on the economies and credit ratings of New York and Washington.

According to Fitch, 25,000 jobs are the equivalent of about a quarter of a percentage point of all the jobs in metro New York. In metro Washington, they’d represent about three-quarters of a percentage point of the labor force. The Washington region is already growing by about 50,000 jobs, or an Amazon HQ2, each year, according to the D.C. Policy Center. New York over the past year gained about 70,000 jobs.

In contrast, a 50,000-person second headquarters, as Amazon originally proposed, would have amounted to about 5 percent of all jobs in several finalist regions: Columbus, Ohio; Nashville; and Indianapolis. The largest employers in Nashville and Columbus today — Vanderbilt University Medical Center and JPMorgan Chase — each employ about 20,000 people.

Amazon quickly would have become the largest employer, the permanent front-page story and the obvious scapegoat for civic problems in any of these midsize cities.

In Seattle, the company has chafed at all these roles as residents have increasingly demanded that Amazon give back to the city that helped make it so successful.

“They’re doing some nice things now with charity,” said Knute Berger, a Seattle native and longtime local journalist who has followed Amazon’s growth there. “But I don’t think they want to take on a civic project. I don’t think they see themselves as a civic company.”

Amazon’s relationship with its hometown grew more acrimonious this year when the city proposed a head tax on tech companies to help pay for homeless services. Amazon opposed the tax, threatening to halt its Seattle expansion if it were adopted, and the City Council ultimately backed down. That was a rare occasion when Amazon threw itself into local politics.

“What I’ve seen is a company that frankly engages very little, certainly in city politics — frankly, even in civic life,” said Mike O’Brien, a member of the Seattle City Council for the past nine years. “For a company whose power has increased dramatically, they haven’t used that power in a way that I am used to seeing from other prominent name brands that are based here in Seattle.”

Other companies keep lobbyists in close contact at City Hall. They buy expensive tables at charity dinners. They publicly campaign for transit improvements.

Boeing, formerly based in the Seattle region, used to encourage its employees to run for public office. Marc Benioff, the C.E.O. of Salesforce in San Francisco, vocally advocated an additional corporate tax there to help alleviate homelessness.

Mr. O’Brien said of Mr. Benioff, “He’s pretty explicit that, ‘Hey, this is our city, too, and any problem that’s the city’s problem is our problem.’” That was in stark contrast to Amazon’s behavior, Mr. O’Brien said.

That Amazon has shied from such roles in its hometown suggests that it was unlikely from the start that it would relish revitalizing a struggling city, or even reprising its role as the big employer in a city. In deciding where to expand next, according to The Wall Street Journal, Amazon weighed whether it would be one of the largest employers in town.

It ultimately chose the places that could absorb Amazon, not the places Amazon could remake in its image.

Emily Badger writes about cities and urban policy for The Upshot from the San Francisco bureau. She’s particularly interested in housing, transportation and inequality — and how they’re all connected. She joined The Times in 2016 from The Washington Post. @emilymbadger