Two people were hurt when a helicopter spun out of control crashed into a suburban front yard.

The aircraft crashed into a Fresno, California residential neighborhood around 10am on Saturday.

Two people onboard were hospitalized with minor injuries – the 47-year-old pilot and a 33-year-old passenger, police said. Both men were in stable condition as of Monday.

Fresno Police Lt. Charlie Chamalbide told the Fresno Bee that the helicopter was a surveying aircraft on a test run. It is unclear what caused the crash, and the National Transportation Safety Board announced it would conduct an investigation into its circumstances. 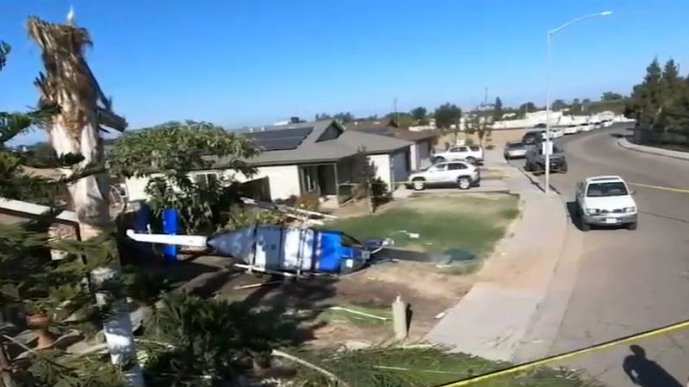 Chamalbide said that both survivors got themselves out of the wreckage. They found the pilot lying on the ground nearby, and the passenger was walking around the crash site.

‘They were both conscious and breathing and talking to us,’ he said.

Chamalbide said the pilot and passenger could not tell what caused their helicopter to crash so quickly. ‘They heard a pop and then they started losing altitude — that’s as far as we know,’ he said.

Nobody in the home was injured, and there was no serious damage to the property.

The terrifying crash was captured by a neighbor’s Ring doorbell camera. In the footage, cars can be seen driving slowly through a residential intersection before the helicopter comes swirling into frame.

The helicopter takes down the top of a palm tree as it lands. It then collapses in a cloud of dust on the ground.

Earlier this year, a helicopter pilot crashed into a tennis court in Oxfordshire, England. All four passengers on the aircraft survived the incident.

The helicopter didn’t catch on fire in the crash, and none of the passengers were seriously hurt. But the impact did spread debris over an area of about 100 yards.