A picture taken of Ms. Rainey, who called herself an “old lady in combat boots,” after she was doused with pepper spray at a protest went viral. 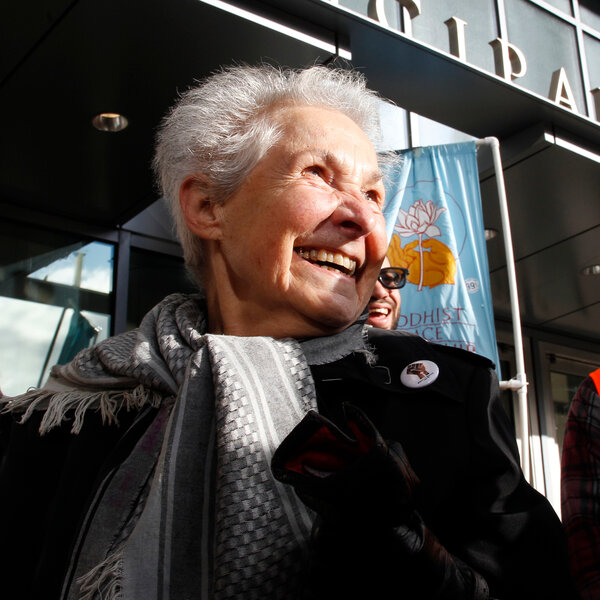 Dorli Rainey, a veteran liberal activist, had just gotten off a bus in downtown Seattle on Nov. 15, 2011, and was on her way to a street safety meeting when she noticed a chaotic scene unfolding around her.

“I saw helicopters,” she later told the British newspaper The Guardian, “and a lot of police activity.”

The loose anti-corporate movement known as Occupy Wall Street, which emerged two months earlier at a park in Lower Manhattan, had spread by then to cities across the United States and abroad, including Seattle, to protest economic inequity.

“Occupy Seattle had taken over the intersection of Fifth and Pine,” Ms. Rainey said. “I’m a member, so I went over.”

Shortly after she entered the fray, police officers doused her with pepper spray while trying to disperse the crowd. Fellow protesters rinsed her face with milk to ease the sting, and a news photographer took a striking picture of the 84-year-old Ms. Rainey staring, unbowed, straight into the camera.

The image spread quickly on the news and on social media, making Ms. Rainey for a time a global symbol of the largely youth-driven Occupy movement.

“This is what democracy looks like,” Ms. Rainey, who often referred to herself as an “old lady in combat boots,” told The Stranger, an alternative weekly newspaper in Seattle, soon after the episode.

“It certainly left an impression on the people who rode the No. 1 bus home with me,” she added.

Ms. Rainey died on Aug. 12 at a hospital in Seattle. She was 95. The death was confirmed by her daughter, Gabriele Rainey.

After Ms. Rainey was pepper-sprayed, Mike McGinn, Seattle’s mayor at the time, apologized to her and ordered a review of the police’s crowd-control tactics.

In an interview, Mr. McGinn called Ms. Rainey a “legendary Seattle activist” whose commitment to causes like fighting homelessness, promoting racial justice and opposing war made her a “voice for the needy and a conscience for the city for decades.”

Dorothea Theresia Hantich was born on Dec. 12, 1926, in Graz, Austria. Her father, Teja, worked for the national railroad and later as a genealogist. Her mother, Dora (Schwarz) Hantich, was a Red Cross nurse.

After learning nursing at her mother’s side during World War II, Dorli Hantich eventually settled in Salzburg and attended medical college. After the war, she spent several years as a translator for United States forces in Austria and also ran the motor pool for a time.

In 1955, while still in Austria, she married Max Rainey, an American engineer. They moved to the Seattle area the next year when he took a job with the aerospace company Boeing. (They later divorced.)

Ms. Rainey almost immediately became active in public life there. To give herself the time to do so, her daughter said, she chose not to pursue nursing and worked as a real estate agent instead. She also volunteered as a court-appointed advocate for children who had been abused or neglected.

In the 1970s, Ms. Rainey joined the Issaquah, Wash., school board. Her initial colleagues there, she said in a 2010 cable television interview, included four members of the right-wing John Birch Society, whom she worked to defeat in a subsequent election.

She also ran a close but unsuccessful primary race, as a Republican, for the King County Council. (“The things that the Republicans in those days did were good things,” she explained in the interview, although she added that she felt there had been a “great deterioration in the quality” of the party’s candidates since then.)

Ms. Rainey’s advocacy addressed environmental issues, like the damaging effects of development on Lake Sammamish. She also protested for housing and public transit and against big banks and nuclear weapons, among other causes.

“What animated her,” Gabriele Rainey said in an interview, “was a sense of justice.”

Ms. Rainey was also a fierce advocate for women’s equality. One way she celebrated the progress she believed had been made, she said in the 2010 interview, was by being “the biggest fan” of the WNBA’s Seattle Storm.

“I go to Storm games and I scream until I’m hoarse,” she said.

In addition to her daughter, Ms. Rainey is survived by her son, Michael Rainey, and a grandson. Another daughter, Andrea Rainey, died in 2014.

In her cable TV interview, Ms. Rainey said she had been handing out leaflets about various political topics in Seattle every Thursday for eight years as part of a continuing silent vigil by a group called the Women in Black. Speaking to The Guardian in 2012, she discussed what motivated her to continue her activism.

“People say to me, ‘Are you crazy? Why don’t you just retire?’” she said. “I can’t. I have to keep on going because there’s so much work to be done. I just don’t feel like sitting at home and letting the world fall apart.”

As for the photo that gave her a fleeting measure of fame, Ms. Rainey did not much care for it.

“It’s a gruesome picture,” she told The Associated Press. “I’m really not that bad looking.”