His ability to blend the fun and the functional with the binder he invented brought order to the chaos of grade-school life in the 1980s and ’90s. 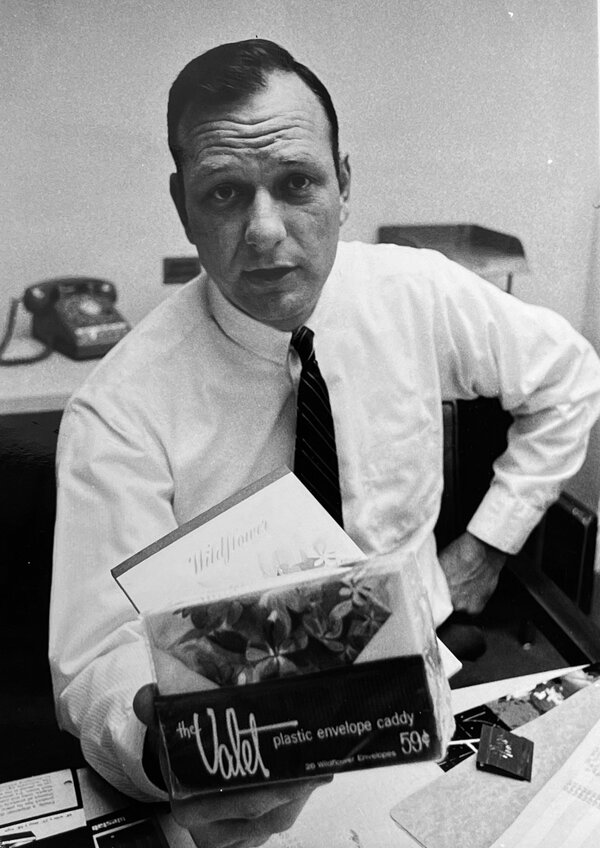 E. Bryant Crutchfield, a paper-company executive who in the early 1980s brought three-ringed order to the chaos of millions of grade-school backpacks with a plastic-and-cardboard triptych he called the Trapper Keeper, died on Sunday at a hospice center in Marietta, Ga. He was 85.

His son, Kenneth, said the cause was bone cancer.

Few objects evoke Gen X or millennial childhood as powerfully as the Trapper Keeper, essentially a large binder for your folders. Mead, Mr. Crutchfield’s employer, introduced it nationally in 1981, and by the end of the decade the company estimated that half of all middle and high school students in the United States had one.

Mr. Crutchfield’s design was brilliantly simple: The “trappers,” or folders, had vertically oriented pockets, which “trapped” papers; they were then held in place by a set of plastic rings in the “keeper,” which was closed with a metal snap — or, in later and more memorable versions, a patch of Velcro.

Just as important as what the Trapper Keeper did was how it looked. Starting with the earliest prototypes, Mr. Crutchfield understood the visual possibilities inherent in its wide exterior panels. Early versions featured soccer players, dogs and cats, and a coastal scene, all stock images he bought from a design agency.

The company later expanded its range of covers, setting up licensing deals with artists like Lisa Frank (think neon unicorns and dancing dolphins) and a host of television shows and movies. Just as popular were covers done by in-house designers, who seemed to have a psychic back door into the teenage aesthetic subconscious.

Trapper Keepers became a fixture in the rad, rad world of 1980s school life, matching the era’s love for bright colors, adorable animals, trippy geometric shapes and lots of laser beams. If you were partial to a puppy holding a basket of flowers in its mouth, there was a Trapper Keeper for you. If a fire-red Lamborghini was more your thing, Mead had you covered. And if all you wanted was a giant Newton’s Cradle standing amid a field of abstract neon-tinted towers, well, not to worry.

“We rolled it out, and it was just like a rocket,” Mr. Crutchfield said in a 2017 interview with the website Mental Floss. “It was the biggest thing we’d ever done. I saw kids fight over designs in retail.”

Until then, most school supplies had been anonymous commodities. The Trapper Keeper conferred personality, and invited further customization. Students drew in them, poked holes in them, wrote poems and love letters on them. They had unintentional uses as well, doubling as headrests at nap time and shields in a snowball fight.

“When I first went to work, all school products were drab and boring,” Mr. Crutchfield said in the Mental Floss interview. Trapper Keepers, he added, were “more functional and more attractive, with oodles of choices — therefore fun to have. And I had a lot of fun making them fun!”

Ernest Bryant Crutchfield, known to his friends and colleagues as Crutch, was born on Feb. 5, 1937, in Greenville, Ala., a small town south of Montgomery. His parents, Ralph and Belle (Griggers) Crutchfield, worked at a cotton mill.

Crutch was the first person in his family to go to college, graduating with a degree in applied design from Auburn University in 1960. He moved to Atlanta to work for Montag, a stationery company, which by decade’s end was part of Mead, the giant paper manufacturer based in Dayton, Ohio.

Along with his son, Mr. Crutchfield is survived by his wife, Virginia (K’burg) Crutchfield; his daughter, Carol Iyer; six grandchildren; and two great-grandchildren.

Early on, he showed an intuitive sense for what consumers wanted, especially those of the teenage variety. He won in-house awards for products like the Valet plastic envelope caddy, aimed at teenage girls. In 1971, in a summertime bid to get students thinking about school (and therefore school supplies), he helped develop one of the first teenager-focused TV specials, “Good Vibrations From Central Park,” featuring acts like the Beach Boys and Carly Simon and pitches for Mead products.

Mead was long known for its dominance in all sorts of paper, but as the industry began to change in the 1970s, the company looked to diversify. Mr. Crutchfield, who by then was overseeing its innovations program, led the way.

A 1976 brainstorming session with his team produced a long list of inspirations, challenges and ideas, including “How to make a binder like a pet,” “How to get a double purchase” and “How to have a knapsack file drawer.”

The Trapper Keeper did all three, and more. The germ of the idea came to Mr. Crutchfield during a conversation with a sales representative from the West Coast, who told him about a folder, popular in California, called the Pee-Chee, which had unconventional vertical pockets.

At the same time, Mr. Crutchfield was following market research showing rapid growth in folder sales to students, driven by the expanding number of high school subjects on offer and the vast amount of paper they generated, thanks to the expanding use of copy machines by teachers.

What students really needed, he realized, was a folder for their folders. He soon had the design in place: two sturdy plastic-coated cardboard panels, with a shorter third panel to enclose them. Each binder would come with a few folders, and students were encouraged to buy more as they needed them.

He found the name during a martini-fueled lunch with Jon Wyant, his research and development director. They had already decided to call the folders trappers.

“What are we going to call the notebook?” Mr. Crutchfield recalled saying.

He put it through a year of testing and iterating. He interviewed teachers and students; he even went to his children’s schools to examine their lockers, to see if the Trapper Keeper would fit.

He and his team chose Wichita, Kan., as a test market, and released the product in 1978. Tucked inside each Trapper Keeper was a questionnaire card, asking what people thought.

Many respondents cited the Trapper Keepers’ usefulness, but just as many mentioned their popularity. “They’re really great — everybody has one,” one student replied. Mead sold out almost immediately.

Still, Mr. Crutchfield took his time bringing the Trapper Keeper to the rest of the country. He made further tweaks, and he commissioned commercials to run during after-school cartoons. He directed one himself, flying to New York to run three teenagers through three hours of filming.

Mead sold more than than 75 million Trapper Keepers. But just as the swell in paper in the late 1970s made the Trapper Keeper a must, the onset of digitization by the late 1990s rendered it an anachronism. It didn’t help that many teachers soured on them, banning them from class because of their size and the distracting Velcro rip — though, to be fair, many of the oversize offenders were made by Mead’s competitors.

Following years of declining sales, Mead pulled the Trapper Keeper from the market in 2002. By then Mr. Crutchfield had long since left the company, which in 2012 merged with Acco Brands. After spending most of his career at the company’s headquarters in Dayton, he moved to Atlanta to work for Georgia-Pacific, another paper company. He retired in 2004.

A 2007 relaunch of the Trapper Keeper fizzled, as did an attempted comeback in 2014, when the company redesigned it to accommodate a tablet device.

But the current wave of 1980s nostalgia, driven in part by period TV shows like “Stranger Things” — which features Trapper Keepers as a prominent prop — may be giving them a new life. The home page for Mead’s website boasts a picture of several, with the tag line “Being retro never looked so organized.”

Over a million Florida ex-convicts can begin registering to vote