On the first day of early voting in New York City, Michael and Eunice Collins voted together in Harlem. Both are worried about the city, but they are divided over who is the best person to fix it.

Mr. Collins, a transit worker, voted for Eric Adams for mayor. “I think he has a greater sensitivity to some of these hot issues — racial injustice and that kind of thing,” he said.

His wife, Ms. Collins, a nurse, wanted a change: “Andrew Yang will bring a fresh perspective to the city.” The couple, both 66, ranked Raymond J. McGuire, a former Wall Street executive, second on their ballots.

This is the first time that New Yorkers can vote early in a mayoral election. Voters were sparse on Saturday and lines at polling stations were much shorter than during the presidential election last year. Early voting will last from June 12 to June 20. The primary election is on June 22.

But it is also the first time the city will be using ranked-choice voting — a factor that has added a significant measure of unpredictability into the mayor’s race.

Interviews with dozens of voters across the city over the weekend, from the Grand Concourse in the Bronx to Flushing in Queens, revealed that the Democratic primary for mayor was still very much up for grabs, and that most voters were taking advantage of being able to rank up to five candidates out of the field of 13. 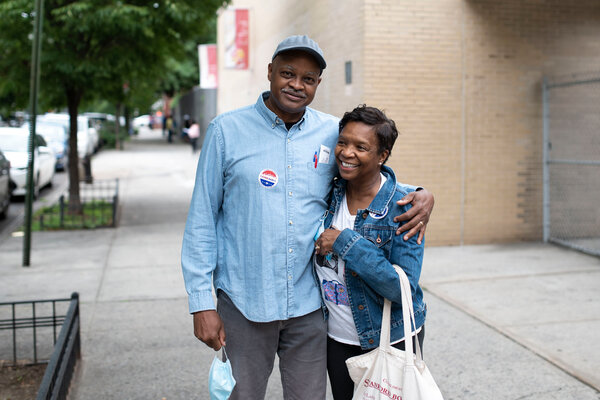 Many voters named quality of life concerns and public safety as their top issues. Kevin Mancuso, a creative director for a hair care company, said he voted for Mr. Yang, the 2020 presidential candidate, calling him “more of a visionary” than the other candidates and “a newer version” of former Mayor Michael R. Bloomberg.

He also said that he was worried about crime, garbage on the streets and an increase of people with mental health problems.

“I feel like I’m living in some third world country,” Mr. Mancuso, 65, said after voting in Harlem. “I grew up here — my parents were born here, I was born here. I’ve never seen it so bad.”

“In my case, crime is the sole big issue,” he said. “So I focused on the candidate that I felt might be best suited to address the issue of crime. And then obviously the situation with bringing jobs back to the city — that was another issue.”

New York City has 104 early voting sites, up from 88 for the 2020 presidential election, when there were very long lines. In addition to the Democrats on the ballot for mayor, there are two Republicans, and a host of other important races, from City Council elections to competitive races for city comptroller and Manhattan district attorney.

Only about 16,800 people voted on Saturday, compared with 93,800 on the first day of early voting last October during the presidential election, according to the city’s Board of Elections.

The Rev. Al Sharpton, the civil rights leader, held a rally on Saturday with several leading candidates to encourage people to vote early. Mr. Sharpton decided not to make a mayoral endorsement this year, disappointing Mr. Adams who had been pushing hard for his support. Still, on Saturday, Mr. Sharpton defended Mr. Adams regarding questions about his residency, saying that Mr. Adams clearly lived in Brooklyn.

Mayor Bill de Blasio, a Democrat in his second term, said he planned to vote on June 22 — after watching the final debate on Wednesday — and was still deciding which candidates to rank.

“This has been unlike any election I’ve ever seen,” Mr. de Blasio said on WNYC on Friday. “I think this will be volatile right up to the end. I think people are going to be deciding, you know, many people, day before, day of, or even as they’re walking into the booth.”

At Lincoln Center on the Upper West Side of Manhattan, Trish O’Sullivan, 73, a psychotherapist, voted for Ms. Garcia first and Mr. Adams second. She said that her top issue was homelessness and that she supported Ms. Garcia because of her endorsement from The New York Times’s editorial board and her “solid track record.”

“I have faith in Garcia because she knows how to accomplish things,” she said.

“I’m very excited about the ranked voting,” he said. “I feel like it’s an ability to really vote for who closest aligns with your views without throwing your vote to the absolute opposite of that.”

At the Bronx County Courthouse, Candice Rowser, 40, a college professor of political science and African-American history, said she cared about jobs and the “excessively high cost of living.” She left her apartment in Queens in May because she could no longer afford the rent, which had jumped to $1,400 per month from $1,000 over the years.

Ms. Rowser ranked Ms. Wiley first, Mr. Adams second, Ms. Garcia third and Ms. Morales fourth. After years as an independent voter, she decided to register as a Democrat when she heard that Mr. Yang was considering a run for mayor.

“When I saw on Twitter that Mr. Yang was filing paperwork to be mayor, I said, ‘hell no,’” Ms. Rowser said. “He has no experience, and he’s clueless.”

Covid-19 Patient Is Bludgeoned to Death in California Hospital