Nearly 315,000 New Yorkers cast their ballots on the first three days of early voting. Many reported waiting in line for hours. 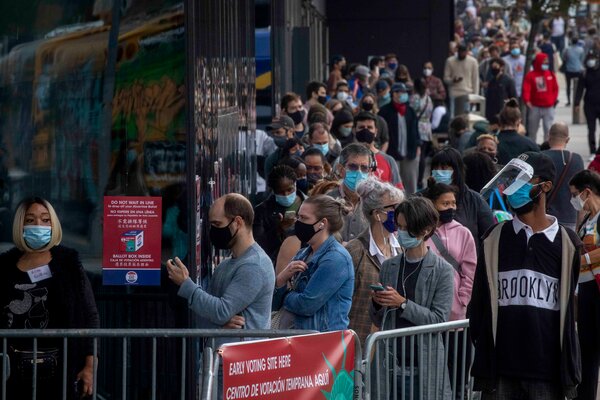 New York City voters continued to show up at the polls on Monday, with every expectation of waiting hours in the cold, drizzling rain. They brought camping chairs. They read old magazines. They made phone calls.

Nearly 315,000 city residents cast their ballots on Saturday, Sunday and Monday, the first three days of early voting in the state. That’s six times the number of people who voted early in the June primaries. Many reported waiting in line for hours.

It’s “unbelievable,” Mayor Bill de Blasio said on Monday. “Literally, we’ve seen nothing like it before.”

The long lines are also in violation of state regulations.

On Monday afternoon, Robert A. Brehm, co-executive director of the state board of elections, sent a memo to local boards — including New York City’s — reminding them that wait times should not exceed 30 minutes.

The memo directed local boards of election to fix the wait times with extra equipment, more workers and whatever else was necessary by Tuesday.

But why is voting taking so long?

Here are our five takeaways from the first three days of early voting in New York City.

People are serious about the right to vote.

Kevin Shade waited outside the Brooklyn Museum to vote on Monday. The socially distanced line stretched from the museum entrance, down the building’s west side, through its back parking lot, up Washington Avenue and onto Eastern Parkway.