A Republican operative in North Carolina has been charged in connection with a voter-turnout effort that investigators said was intended to manipulate the results of a now-overturned general election for Congress last year.

In an indictment announced on Tuesday, the operative, L. McCrae Dowless Jr., was accused of obstruction of justice and illegal possession of an absentee ballot, among other charges. Seven other people were also indicted in connection with the election fraud inquiry.

“This offense was done with deceit and intent to defraud and against the peace and dignity of the state,” said the indictment, which a grand jury in Wake County returned on Tuesday.

L. McCrae Dowless Jr., who was previously indicted for his work in other elections, was charged in connection with an effort to manipulate general election results in the Ninth Congressional District. 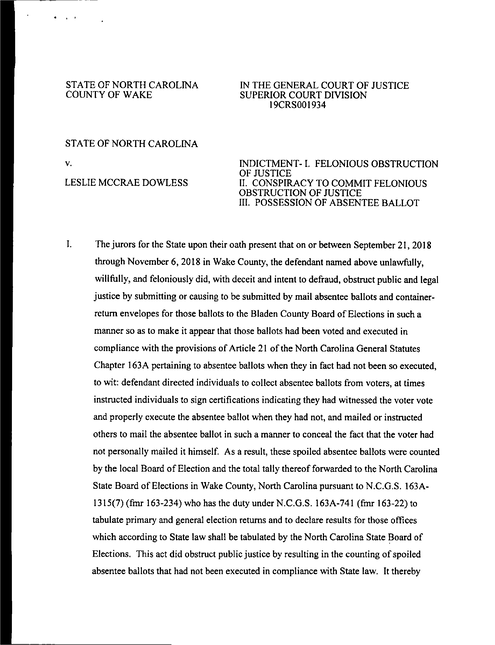 Through his lawyer, Mr. Dowless, who worked during the 2018 campaign for Mark Harris, the Republican nominee in North Carolina’s Ninth Congressional District, has denied wrongdoing. A woman who answered the phone at the lawyer’s office on Tuesday afternoon declined to comment.

Mr. Harris, who eventually gave up his bid to be elected to Congress, has also denied any role in any election fraud.

But state elections regulators and investigators concluded that Mr. Dowless, who had worked for Democratic and Republican politicians alike over the years, had overseen a network of people who collected absentee ballots — a violation of North Carolina law — and sometimes completed them while he was a contractor for Mr. Harris’s campaign.

Although officials never proved that Mr. Dowless’s group touched enough ballots in and around Bladen County to account for the entirety of Mr. Harris’s 905-vote edge, the State Board of Elections decided in February to order a new vote. At the time, the chairman of the elections board, Robert Cordle, cited “the corruption, the absolute mess with the absentee ballots” and described the November election as “tainted.”

Voters in the district, which includes part of Charlotte, will pick a new congressman in September. Mr. Harris is not a candidate, but last year’s Democratic candidate, Dan McCready, is running for the seat against Dan Bishop, who became the Republican nominee in May.

Mr. Dowless was charged in February with a series of felonies connected to the general election in 2016 and the primary balloting in 2018. In both elections, according to indictments that were filed in Wake County, Mr. Dowless’s conduct “served to undermine the integrity of the absentee ballot process and the public’s confidence in the outcome of the electoral process.”

Until now, though, Mr. Dowless had not been charged in connection with the 2018 general election. But his prosecution was widely expected as federal and state investigators spent months gathering evidence.

Karen Brinson Bell, the executive director of the State Board of Elections, said in a statement on Tuesday that the misconduct linked to Mr. Dowless had “effectively disenfranchised voters” in the Ninth District.

“North Carolina voters should be confident that state officials will continue to be vigilant and pursue any individuals or organizations that attempt to undermine our elections,” she said. “Democracy is best served by holding those who attempt to thwart it accountable.”

In an interview in February, Lorrin Freeman, the Wake County district attorney, said she and other investigators had been waiting for the elections board to conclude its work before they turned their focus to last year’s general election.

“What has been challenging about this case and this investigation is that, as has been widely reported, certain activity has gone on for years,” Ms. Freeman, who began investigating Mr. Dowless’s activities in Bladen County after the local prosecutor recused himself, said in her suite of offices in Raleigh, the North Carolina capital. “The more interviews you do, the more interviews you have to do.”

The Ninth District has been without representation since January, when the term of Representative Robert M. Pittenger expired. Mr. Harris narrowly defeated Mr. Pittenger in a Republican primary in May 2018.

‘Provably false!’ Tory MP erupts at Huawei official’s defence as he shuts down each claim
Asia