Eric L. Adams, who rose from poverty to become an iconoclastic police captain and the borough president of Brooklyn, won the Democratic nomination for mayor of New York City on Tuesday, according to The Associated Press, putting him on track to become the second Black mayor in the history of the nation’s largest city.

The contest was seen as one of the city’s most critical in a generation, with the winner expected to help New York set a recovery course from the economic devastation of Covid-19 and longstanding racial and socioeconomic inequalities that the pandemic deepened.

But as the campaign entered its final months, a spike in shootings and homicides drove public safety and crime to the forefront of voters’ minds, and Mr. Adams — the only candidate with a law enforcement background — was the best situated to seize on the issue.

Mr. Adams held an 8,400-vote lead over Kathryn Garcia, a margin of one percentage point — small enough that it was not immediately clear whether she or any of Mr. Adams’s opponents would contest the result in court. All three leading candidates had filed to maintain the option to challenge the results. If they do not do so, the results could be certified as soon as next week.

The results came after the city’s Board of Elections counted an additional 118,000 absentee ballots, and then deployed a ranked-choice elimination system — the first time New York has used it in a mayoral election. 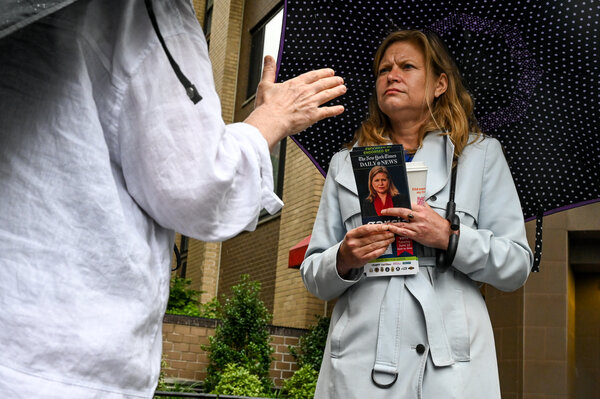 Thirteen Democratic candidates were whittled down one by one, with the candidate with the least first-place votes eliminated, and those votes were redistributed to the voters’ next-ranked choice. Maya Wiley, a former counsel to Mayor Bill de Blasio who emerged late in the primary as a left-wing standard-bearer, came in third place.

Ms. Garcia won far more of Ms. Wiley’s votes than Mr. Adams, but not quite enough to close the gap.

Still, it was a striking result for Ms. Garcia, a candidate who until recently was little known and who lacked the institutional support and the political operation that helped propel Mr. Adams, a veteran city politician.

In heavily Democratic New York City, Mr. Adams will be the overwhelming favorite in the general election against Curtis Sliwa, the Republican nominee and the founder of the Guardian Angels.

Mr. Adams, who cast himself as a blue-collar candidate, led in every borough except Manhattan in the tally of first-choice votes and was the strong favorite among working-class Black and Latino voters. He also demonstrated strength with white voters who held more moderate views, especially, some data shows, among voters who did not have college degrees — a coalition that has been likened to the one that propelled President Biden to the Democratic nomination in 2020.

Ms. Garcia, a former sanitation commissioner who ran on a message of technocratic competence, was overwhelmingly the candidate of Manhattan, dominating in some of the wealthiest ZIP codes in the country. She strongly appealed to highly educated and more affluent voters across the ideological spectrum there, even as she struggled to connect with voters of color outside of Manhattan in the kind of numbers it would have taken to win.

The results capped a remarkable stretch in the city’s political history: The race began in a pandemic and took several unexpected twists in the final weeks. Most recently, it was colored by a vote-tallying debacle at the Board of Elections, leaving simmering concerns among Democrats about whether the eventual outcome would leave voters divided.

Under the city’s new ranked-choice voting system, voters could rank up to five candidates on their ballots in preferential order. Because Mr. Adams did not receive more than 50 percent of first-choice votes on the initial tally, the winner was decided by ranked-choice elimination.

Ms. Garcia came in third place among voters who cast ballots in person on Primary Day and during the early voting period, trailing both Mr. Adams and Ms. Wiley. But on the strength of ranked-choice voting, she surged into second place, with significant support from voters who had ranked Ms. Wiley and Andrew Yang, a former presidential candidate, as their top choices.

Ms. Garcia and Mr. Yang spent time during the final days of the race campaigning together and appearing on joint campaign literature, a team-up that plainly benefited Ms. Garcia under the ranked-choice process after Mr. Yang, who began the race as a front-runner but plummeted to fourth place on Primary Day, dropped out.

Ms. Wiley, a favorite of younger left-wing voters, had sought to build a broad multiracial coalition, and she earned the support of some of New York’s most prominent Democratic members of Congress.

By contrast, both Mr. Adams and Ms. Garcia ran as relative moderates on policy issues including policing, education and their postures toward the business and real estate communities.

Mr. Adams especially put issues of public safety at the center of his campaign, pushing for urgent action to combat a rise in gun violence and troubling incidents of subway crimes as well as bias attacks, especially against Asian Americans and Jews. While crime rates are nowhere near those of more violent earlier eras, issues of policing still became the most divisive subjects in the mayoral race.

Mr. Adams took a more sweeping view of the role for police in ensuring public safety than a number of rivals did.

But some older voters had first heard about Mr. Adams when he was a younger member of the police force, pushing to rein in police misconduct.

That background helped him emerge as a candidate with perceived credibility on issues of both combating crime and police violence. And some Democrats, aware that national Republicans are eager to caricature their party as insufficiently concerned about crime, have taken note of Mr. Adams’s messaging — even if his career and life story are, in practice, difficult for other candidates to automatically replicate.

“What Eric Adams has said quite well is that we need to listen to communities that are concerned about public safety, even as we fight for critical reforms in policing and racial justice more broadly in our society,” said Representative Sean Patrick Maloney, a New York Democrat and the chairman of the Democratic House campaign arm, who endorsed Mr. Adams the day before the primary.

While Mr. Adams was named the winner on Tuesday night, he faces significant challenges in unifying the city around his candidacy. He has faced scrutiny over transparency issues concerning his tax and real estate disclosures; his fund-raising practices and even questions of residency, issues that may intensify under the glare of the nominee’s spotlight, and certainly as mayor, should he win as expected in November.

She Went to Court to Save Her Daughter. Days Later, the 3-Year-Old Was Dead.

Birx warns against gatherings as US reopens from lockdowns