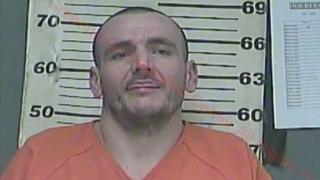 An US prisoner who tried to hitchhike to freedom is back behind bars – after the motorist who picked him up turned out to be a policeman.

Allen Lewis, 31, had run away when being moved from Greenup County Detention Center in Kentucky, to face charges in a different county.

Lewis complained to the transport officer that his handcuffs hurt, so the officer pulled over to fix them.

When one cuff was released, a struggle ensued and Lewis fled on foot.

While the prison mounted a search operation, the escapee made it to a nearby highway and tried to flag down a lift.

Unfortunately for him, the person who stopped was a campus police officer at the local Morehead State University. The handcuffs dangling from one of Lewis’s wrists proved a rather obvious giveaway.

Greenup County Jailer Mike Worthington confirmed that Lewis was returned to prison, and is now facing an escape charge.

“He thought he was getting a ride, and he did,” he added.