Eta’s landfall was its second time coming ashore in the state this week. It hit the central part of the Florida Keys late Sunday.

The center of Eta was about 80 miles north west of Tampa and had maximum sustained winds of 50 miles per hour, the agency said. The storm was expected to weaken after landfall as it moves across Florida. .

A storm surge warning was in effect for Middle of Longboat Key to Suwannee River Fla., including Tampa Bay, the center said.

By early Thursday morning, more than 30,000 customers were without electrical power from Tampa to Gainesville, according to Duke Energy. Streets were submerged just days after Eta soaked the central part of the Florida Keys and its strongest winds battered the Upper Keys and Miami-Dade and Broward Counties over the weekend. 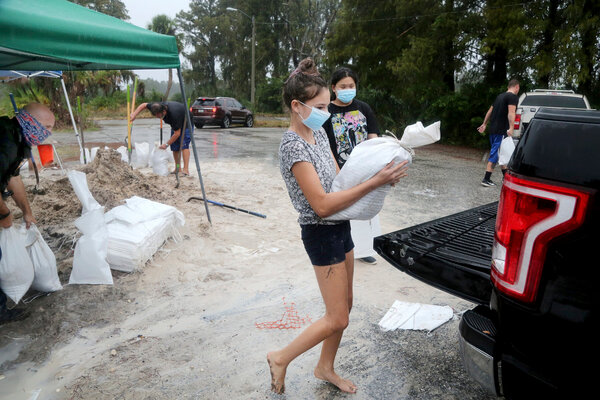 On Wednesday, Gov. Ron DeSantis of Florida urged Florida residents to prepare for the storm and said that the Federal Emergency Management Agency had granted his request for “a pre-landfall emergency declaration” to help mobilize federal aid to the affected parts of the state.

Earlier on Wednesday the storm had briefly regained hurricane strength but weakened again to a tropical storm.

Mayor Jane Castor of Tampa said Wednesday that the city was expecting a tidal surge of up to four feet. She urged people to remain at home but said five shelters had been opened. She warned that “the weather can change in an instant” and asked residents to stay vigilant.

“This storm has been less predictable than most storms,” she said. “This one has changed its trajectory more than once — and it may do it again — so we want to ensure everyone is safe.”

Eta is the 28th named storm and the 12th hurricane of an unusually busy Atlantic hurricane season, which runs from June 1 to Nov. 30. The storm’s formation tied a record set in 2005 when Hurricanes Katrina, Rita and Wilma devastated parts of the Gulf Coast.

Eta first became a tropical storm on Oct. 31, according to the hurricane center. It grew into a category 4 hurricane and thrashed Nicaragua on Nov. 4, killing at least three. By Nov. 9 the storm then traveled to South Florida where it caused intense flooding and produced more than 13 inches of rainfall.

Eta has now produced nine named storm days, according to Philip Klotzbach, a meteorologist at Colorado State University. Only two Atlantic named storms forming in November in the satellite era had generated more named storm days: Epsilon in 2005 with 9.25 days and Gordon in 1994 with 9.5 days, he said.

This year, as in 2005, so many storms grew strong enough to be named that meteorologists turned to the Greek alphabet after exhausting the list of names maintained by the World Meteorological Organization.

Tropical Storm Theta, this season’s record-breaking 29th named storm, will most likely begin to weaken as it moves over the eastern Atlantic over the next few days, the Hurricane Center said.

Heavy rainfall is forecast across western Cuba and South Florida and is likely to spread north across portions of western and northern Florida into Friday.

Several universities in the storm’s path have already canceled classes on Thursday, including the University of Florida in Gainesville and the University of South Florida in Tampa. The public school district in Hillsborough County, which includes Tampa, and the Hernando School District also announced that they would be closed on Thursday.

Mayor Lenny Curry of Jacksonville, in Florida’s northeast corner, said the storm was expected to hit the city on Thursday, bringing heavy rain, strong winds and some flooding. He urged residents to stay out of the water, warning that the surf and rip currents could be dangerous. The city did not anticipate evacuations and planned to keep municipal offices open.

“I know this has been a rough year,” Mr. Curry said at a news conference. “2020 has been something else for our country, the world and our community, and experiencing a tropical storm after the end of hurricane season just adds to it.”