Let’s get it out of the way: This past weekend was not the triumphant kickoff to the post-pandemic summer that many of us New Yorkers had eagerly awaited.

Many of the outdoor barbecues, beach picnics and backyard dance parties that we had optimistically put on our calendars were canceled. Instead, it was a chilly and wet three days spent sitting inside, watching the clouds for portents of the good weather that summer typically promises.

But rest assured: We here at Summer in the City will not let one waterlogged weekend dampen our spirits! (That’s me and Julia Carmel, your concierges for metropolitan summer fun. You can drop us your tips, ideas and feedback at [email protected])

The forecast for the coming days is warmer and brighter. So, this weekend, make up for lost time: get outdoors and get moving.

After a remarkably sedentary year, this might be the time to explore New York City’s hiking trails, and there are few better places to start than at Pelham Bay Park in the Bronx, the city’s largest public park. (Yes, bigger than Prospect Park.) Ride the No. 6 train to the end of the line and you’ll find the park and its hundreds of acres to explore.

There are a number of unmarked trails in the park of varying difficulties, but if you want something more structured, head toward Hunter Island. There, the Kazimiroff Nature Trail will take you through forests where owls go to roost and around marshes that are home to geese and ducks.

The city will feel far behind you and far from your mind. And when you’re done, you’ll be in walking distance of Orchard Beach for a dip to cool off.

If biking is more your thing, strap on your helmet, grab a CitiBike and go for a ride on the Hudson River Greenway, a trail that hugs the length of Manhattan’s West Side for about 13 miles.

The Greenway can get pretty crowded in the afternoons. So if you’re a novice biker who would be frazzled by would-be Tour de France competitors whizzing by you — me, I’m talking about me — consider Governors Island instead.

Take a ferry from Lower Manhattan or the Brooklyn Bridge Park to get to the island, which is smack dab in the middle of New York Harbor and offers picturesque city views. Grab a CitiBike when you dock, and ride around 2.5 miles of bike trails that tend to be less crowded than the paths in the city.

For $10, you’ll be directed through a gentle flow in front of the Alice Austen House, the former home of a lesbian photographer who documented women’s lives in the late 19th and early 20th centuries. (The house, now a museum, is also open for tours, but you’ll need to book in advance.) 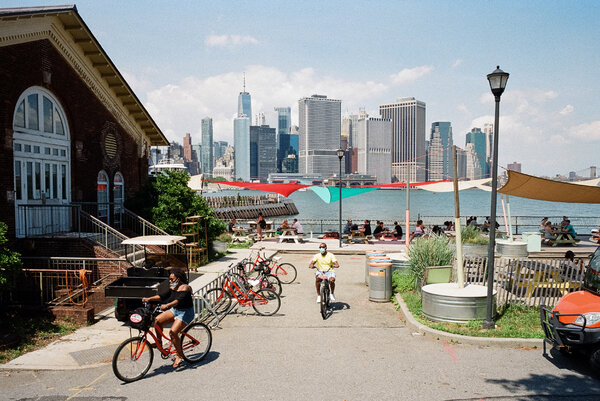 Free fun: The Brooklyn Museum is celebrating Pride Month at First Saturday Lite, with live music, a drag and burlesque show and art.

In the Bronx: Take a stroll through the New York Botanical Garden in the Bronx on Saturday and Sunday afternoon, when the Mark Morris Dance Group will be performing outdoors.

In Queens: On Saturday in Rockaway Beach, not only can you take advantage of some beach weather, but aspiring artists can join a watercolor painting workshop at the Beach 30th Street playground.

Going solo: Carve out space from the stress of the workweek and participate in sound bath meditation tonight at the Fotografiska museum.

Bring the kids: Take a spin around the tarmac on the outdoor roller rink at the retro TWA Hotel. Check out the vintage flight attendant uniforms inside.

What do you want to hear from us this summer? Are there events or venues we should know about? Send us a note at [email protected], or let us know in the comments.

Moderna's Covid-19 vaccine won't be ready by US election: Report

Minneapolis Will Pay Influencers to Fight Misinformation During Officers’ Trials