Some pro-Trump media figures reacted to the search at Mar-a-Lago with talk of ‘war,’ the clearest outburst of such language since the days leading up to the Jan. 6 attack on the Capitol. 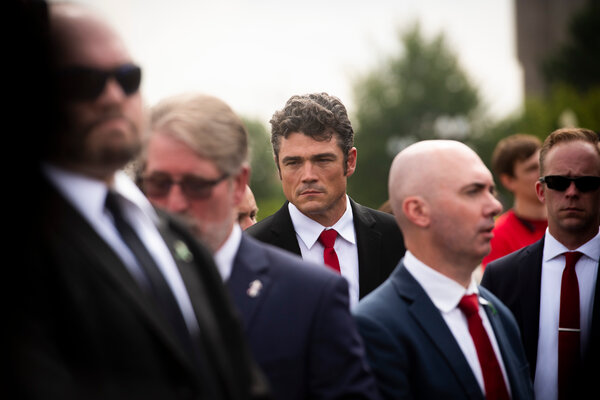 For the past six years, Donald J. Trump’s most loyal supporters have gone on the attack against federal law-enforcement officials whenever they have sought to investigate the former president or his allies.

But the reaction this week to the F.B.I.’s court-approved search of Mar-a-Lago, Mr. Trump’s residence in Palm Beach, Fla., went far beyond the usual ire and indignation. Pro-Trump influencers, figures in the media and a Republican candidate for office employed the language of violence to rally opposition.

“Tomorrow is war,” Steven Crowder, a conservative commentator with 1.9 million Twitter followers, wrote on the site within hours of the search. “Sleep well.”

The search appeared to be focused on material that the former president had brought with him to Mar-a-Lago from the White House, according to multiple people familiar with the investigation. But the reaction on the right cast the F.B.I. move as purely political. The aggressive, widespread response was arguably the clearest outburst of violent public rhetoric since the days leading up to the Jan. 6 attack on the Capitol.

“This. Means. War,” The Gateway Pundit, a pro-Trump outlet, wrote in an online post. The post was quickly amplified by a Telegram account connected to Stephen K. Bannon, Mr. Trump’s onetime political adviser, who was found guilty last month of two counts of contempt of Congress.

Hours later, on the podcast “Bannon’s War Room,” Mr. Bannon himself asked Joe Kent, a Trump-endorsed House candidate in Washington State, for his assessment of the search.

“This just shows everyone what many of us have been saying for a very long time,” Mr. Kent declared. “We’re at war.”

Experts on political violence argue that even if aggressive language does not directly end in physical harm, it creates a dangerous atmosphere where the idea of violence slowly becomes more accepted. Actual attacks against people or institutions become more likely, the experts contend, when elected officials or high-profile figures in the media are able to issue threats or calls for violence with impunity.

“Violent language, including things like calling for war, normalizes violence and encourages people inclined toward it to be more violent,” said Rachel Kleinfeld, a senior fellow in the democracy, conflict and governance program at the Carnegie Endowment for International Peace.

ISIS reaps gains of US pullout from Syria