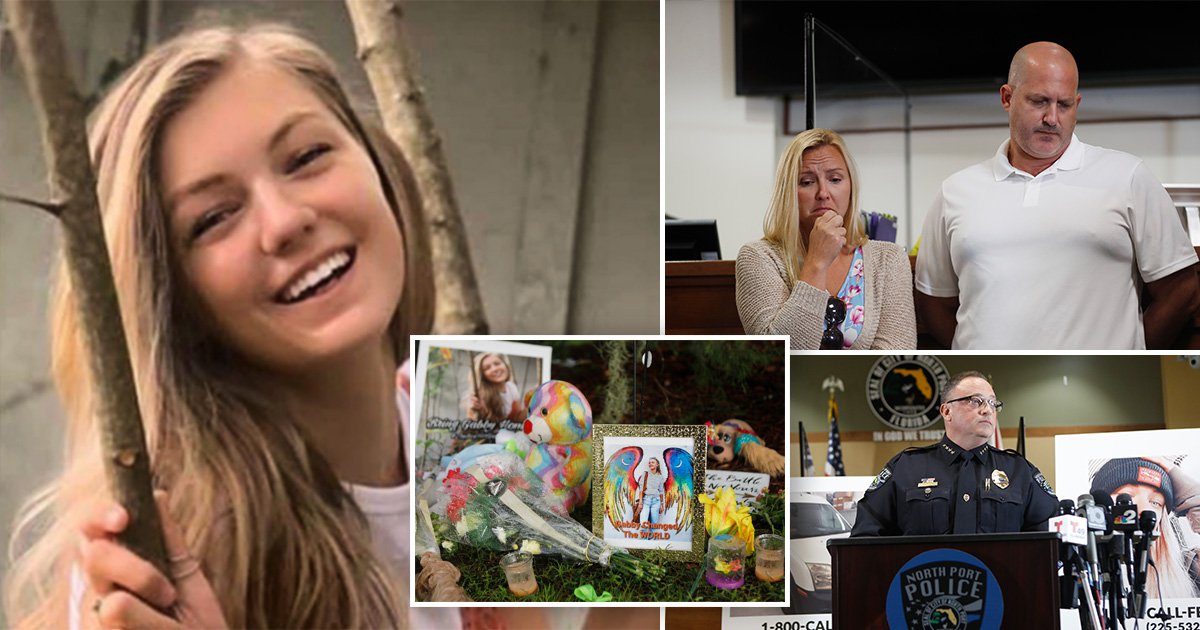 The family of travel blogger Gabby Petito say her fiance is in ‘hiding’, as the FBI confirmed that it has launched a murder investigation into her death.

Now, the 22-year-old’s family have said: ‘All of Gabby’s family want the world to know that Brian is not missing, he is hiding’, according to various reports.

The pair had invited social media users to follow their journey in a van over the summer, with the seemingly happy couple seen cartwheeling on a beach, hiking on mountain trails and camping in the Utah desert.

But they fought along the way, and Mr Laundrie returned home alone to Florida in the van on September 1, with Gabby’s family reporting her missing 10 days later.

This weekend, a body believed to be Gabby’s was discovered at the edge of Grand Teton National Park in Wyoming.

The FBI announced Tuesday that a coroner determined the body was Petito’s and her death was a homicide, but officials are awaiting final autopsy results.

Investigators are attempting to locate Mr Laundrie as a person of interest in the case – with focus turning to a swampy Florida preserve where he is believed to have gone with a backpack last week.

Mr Laundrie has not been seen since Tuesday, September 14, when he purportedly left the family home in North Port with plans to hike alone in the nearby Carlton Reserve wilderness area.

Police and FBI agents broke off their efforts to find Mr Laundrie in the vast, alligator-infested reserve on Tuesday evening, as they scoured some 80 miles of hiking trails, with some sections nearly impassable.

A North Port police spokesman said they would return there early on Wednesday to resume the search.

The FBI had previously swarmed Mr Laundrie’s parents’ house, while social media users have been fascinated by the case and have been pouring over the video and photo posts for clues.

Witnesses last saw Gabby on August 24, as she left a Salt Lake City hotel. She posted her final photo the next day.

FBI Denver Special Agent Michael Schneider said in a statement: ‘The FBI and our partners remain dedicated to ensuring anyone responsible for or complicit in Ms. Petito’s death is held accountable for their actions.’

People have also been fascinated by an interaction recorded on a police bodycam video, released last week, showing the couple after they were pulled over in August in Moab, Utah, where the van was seen speeding and hitting a curb.

They had fought, and Gabby was in tears, with Mr Laundrie saying tension had been building between them because they had been traveling together for months.

In the same state where Gabby was found, at least 710 Native Americans were reported missing between 2011 and late 2020.

A same-sex couple who lived in a van were reported missing and later found shot to death at a campsite near Moab, not long after Gabby and her boyfriend were stopped by police there.

The deaths of Kylen Schulte and Crystal Turner generated some media coverage but nothing like that seen in Gabby’s case.

Making a Murderer case to be re-examined