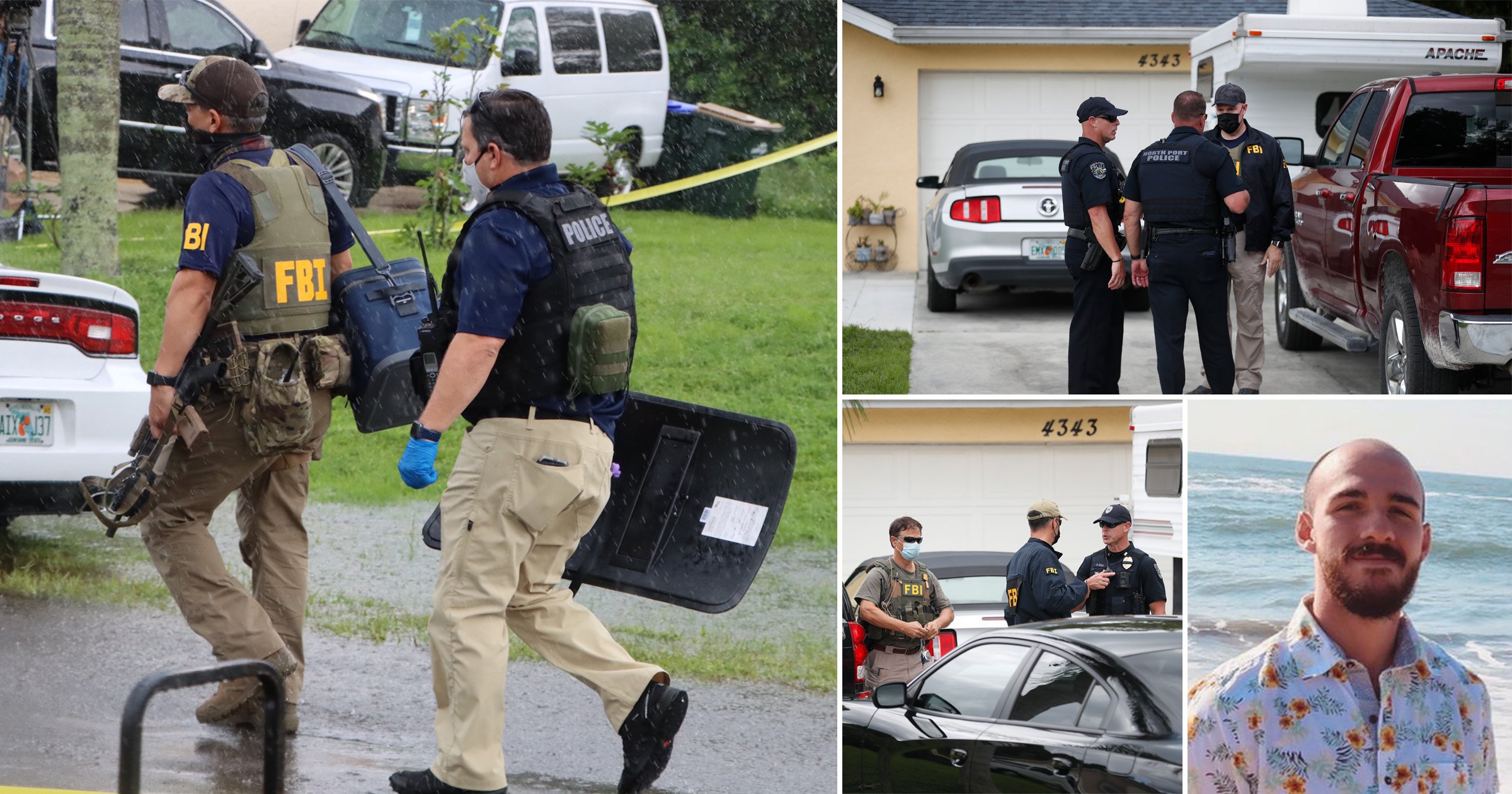 FBI agents arrived at the home of Brian Laundrie’s parents Thursday afternoon to collect his personal items for their intensifying investigation into the disappearance and death of his fiancé Gabby Petito.

Two agents arrived around 1.13pm in a black Chevrolet Tahoe SUV and were let into the home, with one carrying a large paper bag and evidence receipt.

The items they collected from inside the home as well as the camper in the driveway will reportedly be used by K9s to track Laundrie’s scent.

Steve Bertolino, the Laundrie family’s attorney, told DailyMail.com: ‘The FBI is at the Laundrie home today to collect some personal items belonging to Brian that will assist the canines in their search for Brian. There is nothing more to this.’

The FBI is also said to be investigating reports of Laundrie possessing a burner phone he bought a day before he went missing.

Two 911 calls related to the home of Laundrie’s parents were made to police in North Port, Florida, on September 10 – the day before Petito was reported missing.

There were at least 46 911 calls connected to the family’s home between September 10 and 27, according to police records obtained by Fox News.

None of the records detail who placed the 911 calls, and all summaries have been redacted. Brief descriptions of the various calls include outcomes such as ‘Problem Settled’, ‘No Police Action Needed’ or ‘Report Submitted’.

According to Fox News, one of the calls on September 10 was linked to Joe Petito, Gabby’s father.

Three separate calls were also made the next day, coinciding with when Nicole Schmidt, Petito’s mother, filed a missing persons’ report with the Suffolk County Police Department in New York.

Those incidents were listed as ‘follow up/investigation’ and ‘agency assist’, DailyMail.com reported.

Police returned to the Laundrie family home on September 14, 15, 16 and twice on the 17th.

Laundrie’s parents reported him missing on September 17, claiming they had not seen him since the 14th.

A manhunt has ensued, far and wide, for Laundrie, who is the only person of interest in the homicide of his fiancé.

The couple had met growing up on Long Island and later moved in with Laundrie’s parents in North Port. They embarked on what was supposed to be a four month, cross-country road trip, visiting and camping in national parks.

Petito had just started her ‘van-life’ blog of the journey, but Laundrie returned to North Port without her on September 1. Her parents reported her missing 10 days later and her body was found on September 19 in Bridger Teton National Forest.

The Teton County Coroner ruled she had died by homicide. The details of her death contained in the autopsy have not yet been released.

The FBI issued an arrest warrant for Laundrie and a federal jury in Wyoming indicted Laundrie for alleged bank fraud. It’s suspected he used Petito’s debit card on August 30 and September 1, presumably as he drove home to Florida in Petito’s van.

Investigators turned up empty-handed after searching for Laundrie on the Venice side of the Carlton Reserve, a swampy and hard-to-navigate 25,000-acre nature reserve near the family’s home.

Since then, TV personality Dog the Bounty Hunter, whose real name is Duane Lee Chapman, joined the manhunt for the missing 23-year-old.

Deep in the woods of Egmont Key State Park, located on Shell Island off the coast of Florida, Chapman and his team on Wednesday evening discovered the campsite and a fresh can of Monster Energy Ultra Gold.

The can showed no signs of rust or faded colors, signifying it had likely been consumed recently, Fox News reported. The TV personality found no firm evidence that Laundrie was the litterer.

‘We’re here at the island. This would be and could be the perfect spot for him to hide. Not too many people out here but there’s a lot of environmental things that we’re going to fight,’ Chapman said in a video posted to Twitter on Wednesday.

Despite it being a ‘perfect spot’, Laundrie has yet to turn up.

‘The search now is really on,’ Chapman said. ‘The search has just begun.’