Home » Americas » Fewer Cars on 14th Street? Not Just Yet

It’s Monday. A rare copy of the Declaration of Independence is on display through tomorrow at the New York Public Library’s main branch in Manhattan. This is a handwritten copy by Thomas Jefferson, who “underlined the words and passages that were excised from the final text,” according to the library.

Weather: Another warm, sunny day, with a high in the mid-80s. Showers are possible after midnight.

Alternate-side parking: In effect until Thursday, the Fourth of July. 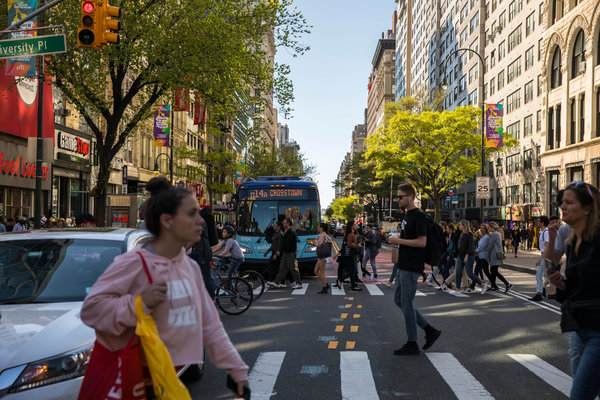 Is it a dead end or just a speed bump?

New York was about to tackle some of the city’s worst congestion with a plan to severely restrict cars along 14th Street, giving preference to buses and trucks.

It represented a rethinking of who public streets are meant to serve.

Then a judge stepped in and blocked the changes, for now. They will again be considered on Aug. 6.

[Read about the city’s plan to turn 14th Street into a transit corridor.]

What is the city’s plan for 14th Street?

???Only buses, trucks and emergency vehicles would be allowed to drive through the heart of 14th Street, between Third and Ninth Avenues.

??All other cars, including taxis and other for-hire vehicles, on that part of 14th Street would be allowed to drive only a block or two, then they would need to turn at the next available right, according to the city’s Transportation Department.

?⬅️And at all times on this part of 14th Street, left turns would be banned (except for Metropolitan Transportation Authority buses at certain locations).

Why does the city want to make these changes?

The city says the plan would ease congestion and improve the struggling bus service in the area. Today, cars and buses crawl along 14th Street. Personally, I find it easier to walk there or avoid the area altogether.

This part of 14th Street also plays a crucial role in moving commuters around while the L train is disrupted for repairs.

Who opposes the plan? And why?

Some residents and block associations in Greenwich Village, Chelsea and the Flatiron district oppose the changes. They say it will divert car traffic and hurt the quality of life in their neighborhoods. At a hearing in State Supreme Court on Friday, Justice Eileen Rakower issued a temporary restraining order. A lawyer representing opponents of the plan said the judge faulted the city for insufficiently analyzing the impact it would have on residents.

Scott Gastel, a spokesman for the Transportation Department, said, “We are confident in both our traffic analysis, and that the court will recognize that we followed all correct procedures — allowing this critically important safety and mobility project to proceed.”

Why should you pay attention to 14th Street?

If the city is allowed to restrict cars on this street, it could potentially roll out similar plans elsewhere.

Ever since Robert Moses starting building bridges and roads in New York in the 1930s, an idea has become cemented into our brains: Roads are for drivers rather than mass transit users, cyclists or even pedestrians.

In recent years, that has been reconsidered.

Pedestrian plazas were built in Times Square 10 years ago. Bike lanes began sprouting up, and almost every neighborhood has busy intersections that have been redesigned to make it easier for pedestrians to get around.

“The Daily” discussed the clash over inclusion at Pride.

2,000 cameras will be watching how you drive in New York City.

New York has banned ICE arrests in state courts. A push to go even further is reigniting debate over the power of sanctuary cities to limit federal law enforcement.

Is retail dead? Or is New York becoming a vertical mall? [Curbed]

Expunging marijuana-related records is easier said than done. [The City]

Recreational drugs might be laced with fentanyl, so the city is distributing overdose kits at clubs in North Brooklyn. [amNew York]

Pink Wall, a film that chronicles heartbreak over six years, in six scenes, screens on the rooftop of the William Vale hotel in Brooklyn. The director and an actor will host a Q. and A. session. 7 p.m. [$16]

A selection of short films made in Inwood by community members screens at Gaelic Field in Inwood Hill Park in Manhattan. 7:30 p.m. [Free]

And finally: ‘I feel like I’m intruding on the art world’

Michael Saviello has managed the Astor Place Hairstylists in the East Village since 1987. He’s known to everyone as Big Mike.

Last month, he made his debut in the New York art world with his first solo show.

[Read how Mr. Saviello went from lunch-break sessions at an easel to Instagram fame to a solo show in Chelsea.]

“You can instantly tell this is a Saviello,” said Guillo Pérez, gesturing to Mr. Saviello’s painting of Tupac Shakur wearing a bandanna. “You can see this was painted by someone chiseled from the effects of life. Every brush stroke has a human fingerprint.”

Another gallerist, Blake Emory, stood before a painting Mr. Saviello made of his wife, Harriett, an elementary schoolteacher, surrounded by flowers. “Mike’s work incites controversy,” he said. “How dare he use such colors?”

Someone asked Mr. Saviello, “Where have you shown before?”

Big Mike’s arrival on the New York art scene was prompted by a perfectly modern sequence of events, including a flush of Instagram fame, and he still doesn’t know what to make of it.

Mr. Saviello’s work at Astor influenced his thinking on art. He encountered artists like Keith Haring and Andy Warhol when they stopped in for haircuts. “I’ve met so many artists here and they’re always struggling,” he said. “It made me realize I’m a practical person. I wanted to be an artist, but not the broke kind.”

Two years ago, he started painting at the barbershop during his lunch breaks. His solo show ran for three weeks in June at the ESP Gallery in the Landmark Arts Building.

On the last chilly Saturday in April, I was eating an omelet with a friend at the Skylight Diner, on 34th Street near Ninth Avenue.

Just outside the window where we were sitting, an older man dragged a mirror in an ornate gold frame to a pile of black plastic garbage bags near the curb.

I got up from the table and left the diner to inspect the mirror. It was heavier than it looked, but I brought it back inside with me anyway. It had brown paper backing and a braided hanging wire. It was a couple of feet wide and about three feet tall: a classic New York sidewalk find.

We finished breakfast. The mirror was awkward to carry (and breakable). I had only reached the Tick Tock Diner at 34th Street and Eighth Avenue when I gave up, leaning the mirror carefully against a wall with the glass side out.

As I walked on to work, I felt some regret. If it had been the end of the day, I thought, I might have taken the mirror home in a cab.

That night, I walked up Eighth Avenue. As I passed Shake Shack near 44th Street, I saw the mirror leaning against a traffic light. It was making slow progress.

The Russian gun activist who was jailed in US