Weather: Upper 60s today, bright early but rainy by afternoon. Mid-50s, gusty and rainy on Saturday; 60 with some showers on Sunday. It’ll be a nice Memorial Day, mostly sunny and near 70. 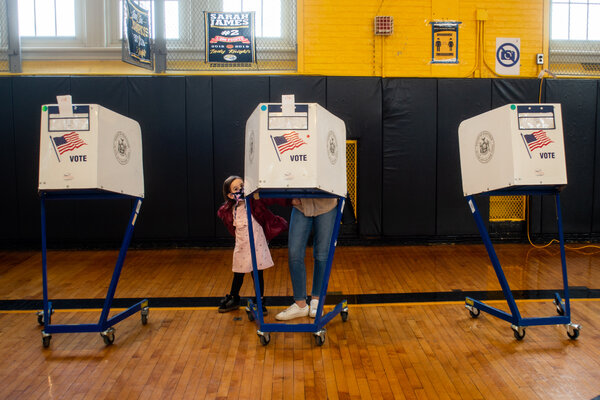 The primary election in the mayoral race is less than four weeks away — and today is the last chance to register to vote in the contest.

Here are a few things to know from my colleague Mihir Zaveri about registration and the June 22 primary:

[And if you would like to learn more, here’s our full guide.]

I’m not registered! What should I do?

If you have state-issued identification and a Social Security number, you can register online here. If you don’t have an I.D., you can print this voter registration form, fill it out and mail it to the city Board of Elections, as long as it’s postmarked by the end of today. You can also deliver the form in person to an elections office.

(If you’re not sure whether you’re already registered, you can check here).

Am I even eligible?

If you’re a United States citizen who has been a New York City resident for at least 30 days and are not currently incarcerated for a felony — yes. (People who are not citizens cannot vote in municipal elections.)

People serving time in jail for misdemeanors can cast ballots, along with those who have been released from prison in New York City.

Who is on the ballot?

There are, of course, the mayoral candidates. But there are several other major races, from comptroller and public advocate to all five borough president spots and several City Council seats.

The competitive race among Democratic candidates for Manhattan district attorney will also be decided.

Yes. The early voting period will last from June 12 to June 20.

If interested, you should look up your early voting polling site (it may be different from your Primary Day polling site) and determine the hours it will be open, which can vary from day to day.

You can request an absentee ballot online here by June 15. Or you can fill out this ballot request form and email it to [email protected], or mail it to the local election office by that date.

You must mail and postmark the completed ballot by June 22, and elections officials need to receive it by June 29 for it to be counted. You can also drop the ballot off at an elections office by June 22 or in ballot boxes at polling sites on Primary Day.

Dianne Morales Tries to Calm a Sudden Crisis in Her Campaign

Broker Fees Are Here to Stay. Why Do They Even Exist?

Some areas of southern Brooklyn are still suffering from the virus and low vaccinations. [The City]

A mother and her three daughters were in critical condition after a fire broke out in a Queens apartment building. [Daily News]

What we’re watching: The Times’s Metro editor James Dao discusses how the desk is covering New York City’s reopening, the pivotal Democratic mayoral race and a host of other issues affecting residents on “The New York Times Close Up With Sam Roberts.” The show airs on Friday at 8 p.m., Saturday at 1:30 p.m. and Sunday at 12:30 p.m. [CUNY TV]