SURFSIDE, Fla. — More than a month after the terrifying collapse of a condominium tower in Surfside, Fla., the last victim’s remains were identified on Monday, bringing the final death toll to 98 and capping a tedious, painstaking effort to account for every resident who had been killed.

The brother of Estelle Hedaya, 54, who lived in a sixth-floor condo at the Champlain Towers South, said the police contacted the family on Monday, saying her remains had been identified. Officials confirmed they had recovered remains for each person who had been considered missing after the June 24 collapse.

The disaster is now officially one of the deadliest structural building failures in American history. The response to the collapse was the largest emergency unrelated to hurricanes ever conducted in Florida.

“Nothing we can say or do will bring back these 98 angels, who left behind grieving families, beloved friends, loved ones across this community and across the world,” Mayor Daniella Levine Cava of Miami-Dade County said in a news conference. “But we have done everything possible to bring closure to the families.”

While the search for bodies at the collapse site concluded on Friday, teams of police officers continued to search off-site through millions of pounds of debris for evidence, victims’ remains and personal items belonging to residents. The final remains were found on July 20, and the Miami-Dade County Medical Examiner Department worked until Monday to identify them, said Alfredo Ramirez III, the director of the Miami-Dade Police Department.

Ms. Levine Cava said crews would continue searching through debris of the collapse “to ensure that all identifiable human remains are recovered.”

The secondary searches, some of them being done by hand, will try to ensure that officials have not missed any additional victims who were never reported missing, Mr. Ramirez said.

The crews will also keep collecting personal items, but officials could not give a specific time when people would be able to retrieve them. “We hope to return as much items as we can to bring closure to the families,” Mr. Ramirez said, adding that they hope to begin the process “as soon as possible.”

Searchers spent several weeks relentlessly digging through the steel and concrete remnants of the 13-story building in a hunt for survivors, long after it seemed that hope had been lost. But after rescuing a 15-year-old boy, Jonah Handler, and finding his mother, Stacie Fang, who died at a hospital, just hours after the collapse 32 days ago, searchers found no one else alive in the debris.

The search-and-rescue effort officially ended on July 7, but officials vowed that the recovery operation would not cease until all the rubble had been searched and every victim’s body had been found.

The discovery of Ms. Hedaya’s remains ends a long, painful period of waiting for her family and friends, who followed along as every other victim was identified within a month of the collapse. Ms. Hedaya’s younger brother, Ikey, traveled to Florida twice, offering a DNA sample and praying near the site.

“Your first reaction is shock and disbelief, and then just crying till you can’t stop, and then accepting what you can’t change,” Ms. Hedaya’s mother, Linda Hedaya, said on Friday before her daughter’s remains were identified.

Estelle Hedaya had relocated to Florida from New York to begin a new chapter, and so much in her life was looking up, said her brother. She had lost weight, bought a new red car and was focused on her spirituality.

Her mother’s wish was that her daughter would be found so she could receive a proper burial.

“We have no choice but to go on, but I want to give her the respect that she deserves,” Linda Hedaya said. “She was my firstborn. I called her my shining star.”

Ms. Levine Cava said that, including the 98 victims, county officials ultimately accounted for 242 people who had been identified as possibly inside of Champlain Towers South at the time of the collapse.

Search-and-rescue teams from Florida, several other states, Israel and Mexico battled dangerous terrain to comb through the remains of the collapsed condo, breathing through billows of thick smoke as they extinguished occasional fires. 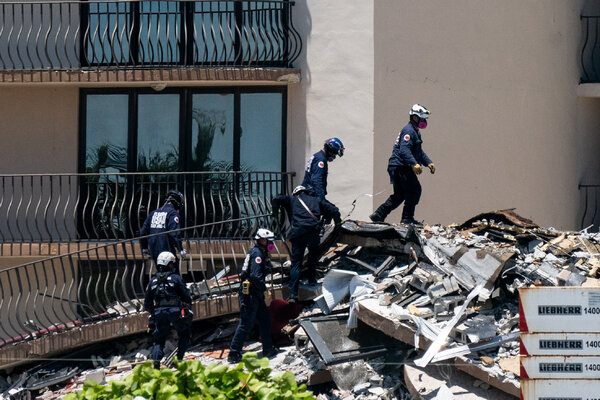 For more than a week, the remaining part of the building towered over them, until it was demolished on July 4 amid the loud fireworks celebrations of nearby Miami Beach, opening new avenues for searchers and speeding the recovery of remains. Tropical Storm Elsa brought lightning and heavy rain, forcing teams to periodically pause their efforts.

It could take months for investigators to determine precisely why a significant portion of the Surfside, Fla., building collapsed. But there are already some clues about potential reasons for the disaster, including design or construction flaws. Three years before the collapse, a consultant found evidence of “major structural damage” to the concrete slab below the pool deck and “abundant” cracking and crumbling of the columns, beams and walls of the parking garage. Engineers who have visited the wreckage or viewed photos of it say that damaged columns at the building’s base may have less steel reinforcement than was originally planned.

Condo boards and homeowners’ associations often struggle to convince residents to pay for needed repairs, and most of Champlain Towers South’s board members resigned in 2019 because of their frustrations. In April, the new board chair wrote to residents that conditions in the building had “gotten significantly worse” in the past several years and that the construction would now cost $15 million instead of $9 million. There had also been complaints from residents that the construction of a massive, Renzo Piano-designed residential tower next door was shaking Champlain Towers South.

Even though Florida’s high-rise building regulations have long been among the strictest in the nation so they could stand up to hurricane winds, flooding and rain, along with the corrosive effects of salty air, evidence has mounted that those rules have been enforced unevenly by local governments. Engineers are conducting a thorough review of Champlain Towers North, a nearly identical building, to determine whether it could also be vulnerable. In nearby North Miami Beach, residents of the Crestview Towers were swiftly evacuated after a report documented cracks and corrosion in the building’s structure. And Bal Harbour 101 is spending an estimated $4.5 million in repairs. Now, residents throughout the region who long glamorized oceanfront condos are debating whether they should put their homes on the market.

Entire family units died because the collapse happened in the middle of the night, when people were sleeping. The parents and children killed in Unit 802, for example, were Marcus Joseph Guara, 52, a fan of the rock band Kiss and the University of Miami Hurricanes; Anaely Rodriguez, 42, who embraced tango and salsa dancing; Lucia Guara, 11, who found astronomy and outer space fascinating; and Emma Guara, 4, who loved the world of princesses. A floor-by-floor look at the victims shows the extent of the devastation.

A 15-year-old boy and his mother were rescued from the rubble shortly after the building fell. She died in a hospital, however, and no more survivors were found during two weeks of a search-and-rescue mission. There had been hope that demolishing the remaining structure would allow rescuers to safely explore voids where someone could possibly have survived, but only human remains were found. There were 98 victims overall.

As the days dragged on, family members who gathered at a reunification center and nearby hotels for updates on the search were swabbed for DNA to help identify bodies, as a growing throng of people — including President Biden — paid their respects at nearby memorials.

“We have all asked God for a miracle,” Ms. Levine Cava told reporters when the search for survivors was declared over. “So the decision to transition from rescue to recovery is an extremely difficult one.”

As time passed, the authorities found it more and more difficult to identify the recovered victims because of the deteriorated state of the remains. The process required medical examiners to deploy extensive resources, including extracting DNA from bones and partnering with the F.B.I. to lift delicate fingerprints. In the case of at least one victim, the identification process took 16 days.

Officials will now turn their entire focus to determining what could have caused the collapse. While search teams dug through the rubble, so did homicide detectives from the Miami-Dade Police Department and the National Institute of Standards and Technology, looking for any clues.

“There was something very, very wrong with this situation,” Mayor Charles W. Burkett of Surfside said on June 26. “We’re going to find out what happened — not tomorrow, not today, but not in the indefinite future.”

Four finalists compete for Time's Person of the Year for 2020

Biden beats Trump to be next US President, says time for nation to unite and heal