The Metropolitan Transportation Authority’s new digital map also includes updates on elevators and escalators that are out of service. 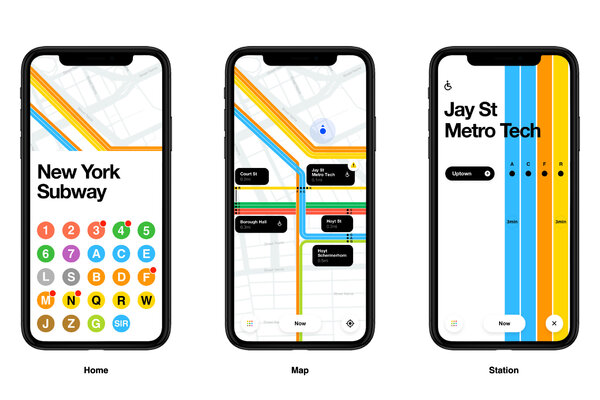 Small, gray rectangles show trains moving through subway tunnels in real time. Brightly colored strokes depicting each of New York City’s 26 subway lines fade when those lines go out of service. When trains are running in only one direction, those solid lines become dashes and black dots representing stations turn into triangles.

Ride the New York subway, and there is a good chance it is using equipment dating to World War II. But open up the system’s new map on a phone and you will be whipped into the 21st century.

The new map, which transit officials unveiled this week and say is the first of its kind in North America, is designed to show how service is running in real time and help riders navigate often complicated service disruptions caused by construction projects, train break downs and other unplanned interruptions. The map also seeks to alleviate another rider frustration by showing elevators and escalators that are out of service.

Up to now, information about subway schedules changing during weekends, or about trains running on tracks typically used by other lines, was available in text form on the Metropolitan Transportation Authority’s website and posted on lengthy, baffling posters plastered in stations.

But by depicting service changes visually, transit officials say, the map will allow even the most novice straphanger to navigate the labyrinthine underground network, which is routinely plagued with disruptions.

“I have struggled along with other New Yorkers to navigate service changes. Sometimes reading the service changes in text form is confusing,” Sarah Meyer, chief customer officer at New York City Transit, said in an interview. “We needed to make sure we’re giving people information they need, when and where they need it.”

The digital map is the Metropolitan Transportation Authority’s latest effort to modernize the antiquated system: Transit officials recently announced that they had rolled out the agency’s contactless payment system — which allows riders to pay a fare by tapping their credit card or cellphone onto an electronic reader — to nearly 80 percent of subway stations.

Record heatwave in LA, but apathy and politics drown out climate change fears