Home » Americas » Finally, California Is About to Reopen 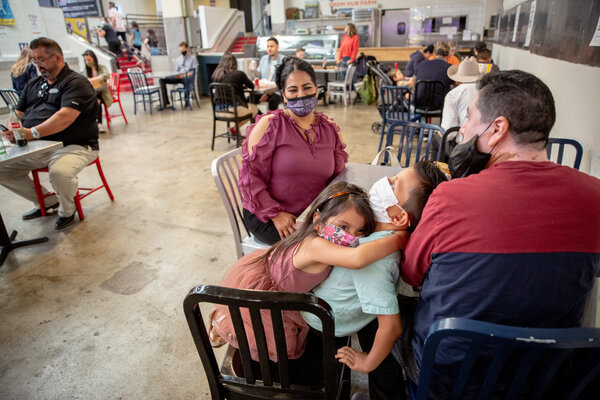 We’ve been waiting for this week for a long time.

After more than a year of complex, evolving rules governing where Californians can go and what we can do, on Tuesday, nearly all of them will go away.

California, the nation’s most populous state, will be one of the last to lift the bulk of its coronavirus restrictions. But that doesn’t mean we’ll immediately snap back into prepandemic life.

Here’s what you need to know to be prepared:

“We absolutely are,” said Dr. Kirsten Bibbins-Domingo, the vice dean for population health and health equity at the School of Medicine at the University of California, San Francisco.

The state’s low case rates have been stable, and the state’s vaccination rates are high overall.

But that doesn’t mean Dr. Bibbins-Domingo is without worry.

There are still pockets where fewer people are vaccinated, which means that the virus — and particularly any virulent variants — could spread more easily through a given community.

“That’s why we can’t let our foot up on the push to vaccinate,” she told me.

Dr. Bibbins-Domingo said she was also nervous about the push to reopen without significant infrastructure in place to verify people’s vaccination status or ensure that vulnerable Californians who work in higher-risk settings, such as meatpacking plants or factories, are protected.

And finally, she said, as the world reopens, it’s imperative that public health departments continue to get support and funding to properly track outbreaks and monitor any new diseases.

“I don’t actually think that our new normal should be each person agonizing,” she said. “This is the job of public health officials to actually say we’re safe enough to open, and in the background we’re going to work to keep you safe.”

What is actually happening on Tuesday?

The simple answer is that capacity restrictions on businesses, as well as physical distancing requirements, are going to be lifted. That means that, if the business allows it, you could go into a bar and sit at a stool right next to a stranger. You could take in a film in a packed movie theater and freely chomp on your popcorn. You could hit a dance floor, sing at a full church service, cheer at a baseball game.

From a government perspective, things are little more complicated.

While the whole point of declaring an emergency — as Gov. Gavin Newsom did in March 2020 — is to give officials flexibility to move quickly, winding down all the temporary regulations solidified in many intertwined executive actions will be a longer process, officials said in a briefing on Friday.

For example, the state suspended some training and licensing requirements for certain health care workers, as hospitals scrambled to deal with the surge of Covid-19 cases, and officials said it’s important not to yank the regulatory rug out from under people who may still be working in their pandemic roles.

But officials did take a significant step on Friday: The state officially ended the order directing 40 million Californians to stay at home, which had been in place since last year. A new, much less stringent public health order will go into effect on Tuesday.

Still, there may be some changes that could become permanent.

Covid has been a “great accelerant of change,” Dr. Mark Ghaly, the state’s health and human services secretary, said on Friday. “What, if anything, makes sense to make permanent — those are important conversations that will have to happen in the weeks and months and years to come.”

So will I have to wear a mask?

If you’re fully vaccinated and you’re not working, probably not.

There are, as we explained recently, some exceptions, such as on public transit, in health care settings and indoors at K-12 schools, where everyone must wear a mask regardless of vaccination status.

Unvaccinated people must continue to wear a mask indoors — although businesses have the option to enforce that regulation as strictly as they want, or essentially not at all. (They will be required to post the rules, and patrons will “self-attest” that they are complying.)

Rules for masking up at workplaces fall under the purview of the state’s Occupational Safety and Health Standards Board, which has reversed course multiple times, leading to some confusion.

Most recently, the board released another set of revised guidelines suggesting that fully vaccinated workers generally won’t have to wear masks, even if some of their co-workers are unvaccinated. (Unvaccinated workers will still have to mask up if they’re working with another person indoors or in a vehicle.)

But workers may not be able to fling off their masks on Tuesday; those relaxed rules may not go into effect immediately, unless Governor Newsom intervenes.

The Sacramento Bee has more of the latest details on workplace mask rules.

Read more about the state’s new mask rules for when you’re not working.

The governor said on Friday that a state vaccine verification system was in the works, The San Diego Union-Tribune reports.

Look back at what officials have said about vaccine passports in California.

Read about why the state is still, and will continue to be, in a state of emergency.

How severe is the drought broiling the West? See for yourself with these maps and charts.

This week, the state is expected to be hit by a heat wave. The state’s power grid operator warned the public to be prepared to conserve energy, Reuters reports.

Scientists said in a new report that unless the world stops treating climate change and biodiversity collapse as separate issues, neither problem can be addressed effectively.

The virus raged among farmworkers in the Salinas Valley, but now the region is a model for vaccination and safety, The Washington Post reports.

The San Francisco Chronicle looked at the aftereffects of the restaurant labor shortage in the Bay Area and found that service was suffering, leading to a jump in negative online reviews.

Alan Hostetter — the cop-turned-yoga-guru whose wife, a San Clemente teacher, was the subject of a Times article — was charged in connection with the Jan. 6 Capitol insurrection, The Orange County Register reports.

CalMatters explores the debate over legalizing psychedelics in the state.

The Fresno City Council passed a resolution allowing the number of weed dispensaries in the city to 21, from 14, The Fresno Bee reports.

Thinking about going to Hawaii? Be prepared: Testing and quarantine rules are shifting, and it’s going to be crowded.

The Los Angeles Times explores why Latinos continue to be underrepresented in Hollywood — and what a better future might look like.

Have you heard of this immersive Van Gogh exhibition? The Times’s critic says that babies “and others with similar tastes” might enjoy it.

There is one occasion per year that reliably makes me wish I lived in New York, and that is the Westminster Kennel Club Dog Show. The event took place over the weekend not at Madison Square Garden as it usually does, but at a riverside estate in Tarrytown, N.Y.

Read updates from the competition here, and look at some photos of very good dogs here.

Monolith monotony? Another mystery structure appears and vanishes in California