Five people have died after rare ice storms, frigid temperatures and heavy snowfall swept across the southern US.

Two people were killed in Texas and two more in Kentucky – both in crashes on treacherous roads, which local officials believe were likely caused by the weather.

Another died in the unusually cold conditions in Louisiana, where a resident in the city of Baton Rouge slipped on ice and suffered a fatal head injury. 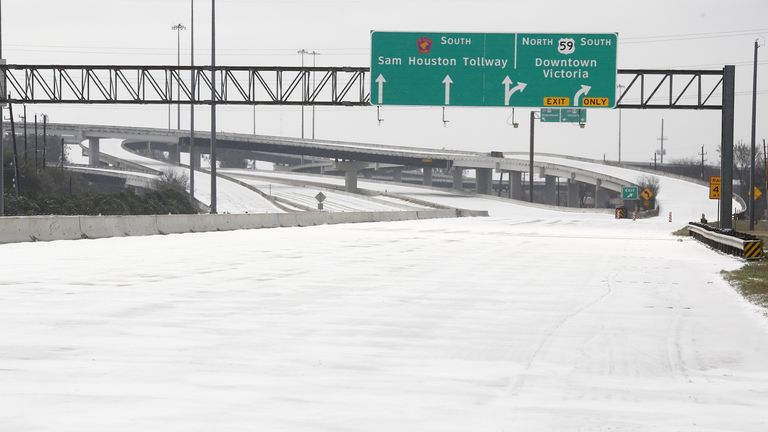 Subfreezing temperatures have caused massive power outages in Texas and all across the Deep South – and officials are urging people to stay home as the winter storms continue to shut roads and cause traffic pile-ups.

President Joe Biden has declared a federal emergency in Texas, where temperatures plunged to -22C (-7.6F), compared to the usual February average of between 20C (68F) and 24C (75F) in central and southern areas.

And as temperatures looked set to plummet again, officials warned that homes still without power would possibly not have heat until at least Tuesday.

“Things will likely get worse before they get better,” said Houston’s Harris County Judge Lina Hidalgo.

America’s largest oil refinery – Motiva’s Port Arthur – has also had to shut down because of the weather in Texas, described by the company and Republican Governor Greg Abbott as “unprecedented”.

Homes and businesses in eastern Kansas and western Missouri have also been struck by power blackouts, with the total number of people affected stretching into the millions.

The bleak conditions have been caused by an Arctic air mass – or polar vortex – which has settled over much of the country, from the Pacific Northwest through to the Great Plains and into the mid-Atlantic states. In the heart of Texas, Dallas is a city that’s used to sunshine. Which is to say that it really isn’t that accustomed to snow, ice and temperatures stretching way, way below freezing.

Take the drivers. As I stood near a busy road junction, I saw cars sliding and getting stuck.

As I watched, a woman in a Mini found her car stuck on a road gently sloping uphill. Another driver, in large pickup truck, stopped to help, and then found his own vehicle trapped by the icy conditions.

In the end, the Sky News team walked over and gave both cars enough of a push to get them on their way again. The drivers inside looked relieved, and faintly terrified. Dallas simply does not know how to react to these extraordinary Arctic conditions that have engulfed both the city and most of the state.

Drive along the roads, and you can see the evidence.

Some of the busiest highways in the city have not been gritted, with all the traffic using just one lane, where the snow has been carved away by the day’s traffic.

But if you want to leave a freeway, for instance, you end up driving across a lane of snow and ice.

When we arrived in Dallas, the sky was beautiful – big, bright and blue. It brought a beguiling sense of calm, but spend five or 10 minutes out in this weather, and you can feel the cold running through you. And the victims of all this are becoming apparent. Electricity supplies have become erratic, with blackouts across Texas.

Millions have lost power and, for many people, that affects the heating and hot water supply.

Imagine that happening to you when the temperature is so terribly cold, and when you are simply not used to dealing with this sort of weather.

What’s hitting the electricity is both a surge in demand, and a fall in supply. Although Texas is closely associated with the oil industry, it relies significantly on wind power.

The trouble is that some of these turbines have frozen stiff. And if they don’t spin round, they don’t make power.

Shelters have been set up for those in peril, either because their electricity has failed, they are vulnerable, or because they are sleeping rough. COVID vaccine distribution, too, has been hit.

At one centre, in Saint Felipe, the generators broke down, meaning the refrigeration units failed with more than 8,400 doses of the Moderna vaccine stacked inside.

Knowing they had to be used quickly, they were taken to hospitals, a university and a jail – all places that had access to people who needed immunisation, and medical professionals who could apply the jab.

The cause of all this is a so-called polar vortex that has brought freezing air down from the Arctic, the result, according to some scientists, of the warming temperature in the Arctic circle.

It has happened suddenly and with dramatic results – the president has declared it as a federal emergency, which allows Texas to access disaster relief funds.

But in reality, it is not just Texas that is being struck. Kansas, New Hampshire, Nebraska, Washington State – the list goes on, with state after state being affected by terrifically cold weather. 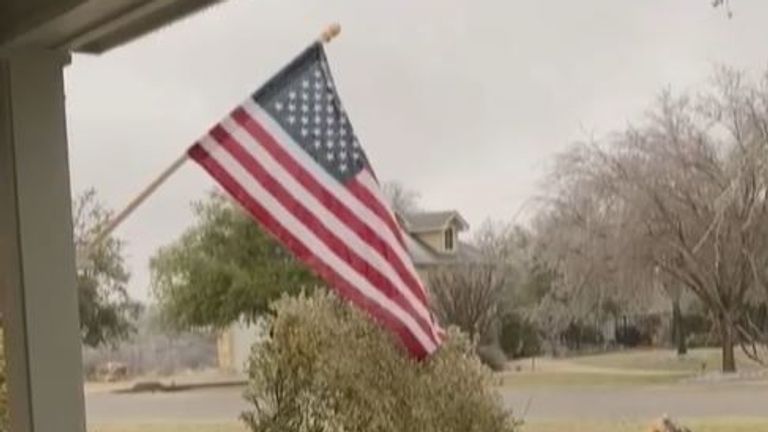 In Dallas, there were those who revelled in the occasion – sledging down hills, and hurdling snowballs. But there are others who are nursing injuries, dealing with extreme cold and worrying.

There are already signs of panic buying, and also of essential services shutting their doors.

Few states have the reputation for bullish self-confident that Texas does. But now, as it wrestles with this bone-chilling cold, the swagger has gone a little, replaced by a shiver.

Jeffrey Epstein’s alleged victims finally have their day in court