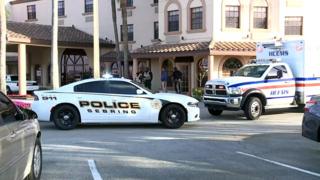 A gunman has killed five people at a bank in Florida, police say.

They say officers responded after a man called police from inside the SunTrust bank in the town of Sebring and said: “I have shot five people”.

The gunman – named as Zephen Xaver, 21 – had barricaded himself in the branch, forced people to lie on the floor and began shooting, police say.

He surrendered after police stormed the bank. The motive for the shooting remains unclear.

The incident took place just after 12:30 (17:30 GMT). Police say they were the only five people in the bank at the time.

“This horrific incident shocks and angers me more than anything I have encountered in my career,” said local sheriff Paul Blackman.

UK hacking suspect wins appeal on extradition to US