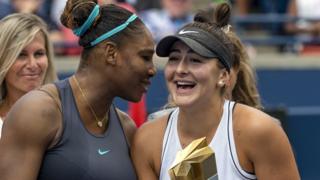 Canadian 19-year-old Bianca Andreescu is to take on tennis legend Serena Williams in her first Grand Slam final at the US Open.

Here’s what you need to know about tennis’ rising star.

1. She’s having a great year

Just over a year ago, Andreescu was ranked just 208th in the world by the Women’s Tennis Association. She’s now 15th.

Born in Toronto to Romanian parents, she spent her early life in Romania, which is where she first picked up a racquet at the age of seven. She returned to Toronto, and at 11 was picked for Tennis Canada’s national training programme.

At 17, she turned pro. Earlier this year she had an eye-catching win at Indian Wells, the first time a wildcard has won the tournament.

After making the US Open final she seemed overwhelmed.

“It’s just surreal. I really don’t know what to say. It’s a dream come true playing against Serena in the final of the US Open. It’s crazy.”

2. This isn’t the first time she has met Williams

The two faced off last month at the Rogers Cup, but Williams had to retire in the first set due to injury.

Andreescu is the first Canadian to ever make it to the US Open final.

If Williams wins, it would be her 24th Grand Slam title, which would tie her with Margaret Court for the all-time record.

Andreescu says she has enormous respect for Williams.

When Williams had to retire from the Rogers Cup, Andreescu went up to give her a pep talk.

3. She should not be underestimated

Serena Williams is favourite to win on Saturday, but with Andreescu, anything could happen.

She has won 23 straight matches, and holds a 38-4 record this year, despite suffering a five-month shoulder injury.

If she loses to Williams, she will be ranked ninth in the world. But if she wins, she’ll take the fifth spot.

4. Her family (including dog Coco) is her biggest fan

Andreescu’s mother and father have been cheering her on for years, but recently her dog Coco has also been spotted at her matches.

5. She’s a hometown hero… wherever she goes

Andreescu has a large fan base in both Canada and Romania.

“Romanians are everywhere,” Andreescu told WTA Tennis. “I’ve definitely got a lot of love from all the Romanian media, which is nice. It’s nice to have two fan bases.”

In Canada, her fans have taken over social media with the hashtag #ShetheNorth, a nod to another Canadian champion, the Toronto Raptors’, whose slogan We The North became a national rallying cry when the basketball team won the NBA championship.

Facebook's email-harvesting practice is under investigation in New York