Delivery drivers have been essential to feeding New York, while boosting sales for companies like DoorDash and Uber. But they say work conditions have gotten worse.

Credit…Jose A. Alvarado Jr. for The New York Times 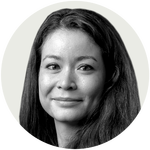 When the pandemic lockdown led the Manhattan restaurant where Natanael Evangelista was an employee to close for good, he quickly shifted to working for food delivery apps. He had few options. He was undocumented, did not speak much English and needed money badly. He owed months’ worth of rent, and his family in Mexico needed help.

But he was worried. Two of his cousins were also delivery workers — one had contracted the coronavirus and fallen into a coma, while the other had been assaulted and had his bike stolen.

With hundreds of thousands of New Yorkers out of work and the city’s unemployment rate at 14.1 percent, many desperate people have turned to working for food delivery apps like DoorDash, Uber Eats and Grubhub, which have seen huge demand from customers who are working from home.

While delivery drivers have been essential to feeding New Yorkers and keeping them safe, their working conditions, already precarious before the pandemic, have gotten worse.

The recent surge in cases means greater risk of exposure traveling from restaurants to homes. Rising crime in New York City has also led to instances of assault and bicycle theft.

Some workers also complain that many restaurants deny them the use of their bathroom out of health concerns, forcing them to carry plastic bottles. 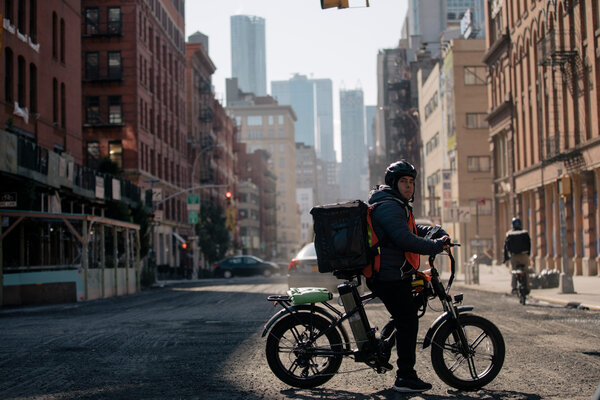 Even as the food delivery companies have seen sales surge, the workers’ pay has remained erratic. Because the drivers are independent workers, they are not entitled to a minimum wage, overtime or any other benefits, like health insurance. Undocumented immigrants, who are not eligible for unemployment or federal coronavirus assistance, make up the bulk of the work force in New York.

The added competition from the surge in new workers has compounded the financial challenges. While there are no precise figures, advocacy groups estimate that there were roughly 50,000 delivery workers before the pandemic — a number they say has grown exponentially. Uber alone said it had added 36,000 couriers in New York since March.

DoorDash and Uber said they had provided extra help to delivery drivers during the pandemic, including offering sick pay to those who had gotten the virus. DoorDash, the nation’s largest food delivery app, said it provided masks, gloves, hand sanitizer and wipes to drivers, as well as access to low-cost telemedicine appointments.

“Since the beginning of the Covid-19 crisis, we have taken action to protect and support Dashers who are on the front lines,” Becky Sosnov, a spokeswoman for DoorDash, said.

DoorDash said it had changed its pay model, which came under fire last year after it was revealed that tips were being used to subsidize its payments to workers. But workers interviewed for this article said the practice still occurred. The company recently reached a $2.5 million settlement with prosecutors in Washington, D.C., after being accused of misleading consumers over how it tipped its workers.

At Uber Eats, “delivery people receive 100 percent of all tips,” Meghan Casserly, a spokeswoman for the company, said. She said Uber Eats has provided 10 million safety supplies — masks, wipes and hand sanitizer — to workers in the United States and Canada.

Some food delivery apps say drivers can earn as much as $22 per hour, including tips, though many drivers said they never earned anywhere close to that much.

Drivers for food delivery apps are typically paid per delivery depending on the estimated duration and distance of a trip, plus tips. The work can be convenient for people supplementing a main source of income, but a struggle for those who depend on it as a primary job, advocates for the workers said.

“The pandemic really exacerbated the challenges that these workers are facing and that they regularly face,” said Maria Figueroa, director of labor and policy research for the Cornell University Worker Institute. “In addition to getting low pay, they don’t get enough work from each of the applications, so they have to work for at least three or four of them, and there are more workers than the market can hold.”

Treating the drivers as essentially freelancers, Ms. Figueroa said, has allowed the food delivery apps to offset what have been thin profit margins by not having to pay for health insurance, retirement benefits or workers’ compensation for injuries on the job.

On good days, Mr. Evangelista makes roughly $100 after working five to six hours, but other days he can make as little as $42. In his old job, working in the kitchen of a restaurant in Midtown Manhattan, he made about $15 an hour, he said.

Workers said food delivery apps do not always give them all of their tips, or sometimes deduct them from their pay.

Gustavo Ajche, 37, a construction worker who turned to food delivery apps when he lost his job during New York’s lockdown in the spring, said he was blocked by one app, Relay, after he complained that he had not received his tips. “They don’t care,’’ he said.

In one case, a $10 tip he had received from a customer appeared on the restaurant receipt, which he showed to a reporter — but not on his Relay app or in his bank account.

Alex Blum, the chief executive of Relay, a small company that delivers mainly in New York City, attributed the error to the restaurant’s failure to manually enter the tip into the Relay system.

Mr. Blum said Relay paid its delivery workers $11.80 an hour, the city’s minimum wage, even in between deliveries. But the company has been the target of numerous lawsuits from workers who claim that they are not paid fairly for the hours they work.

“They don’t think about you, your life, your bicycle,” said Otoniel Timoteo, 36, who turned to delivery work in May after being laid off from a restaurant in Queens where he worked as a waiter. “We cannot make demands, otherwise they will block you. But we have no choice. How can we live?”

The New York City Taxi and Limousine Commission two years ago adopted a $17.22 per hour minimum wage for drivers for ride-hailing apps like Uber and Lyft, but it does not apply to delivery workers. Efforts in New York State to provide more rights to gig workers by reclassifying them as employees have stalled in the Legislature.

In California, companies that employ gig workers won a major victory on Election Day when voters approved a ballot referendum that allowed the companies to continue treating the workers as independent contractors.

Across the nation, the demand for takeout during the pandemic has been a boon for food delivery apps.

“The pandemic has certainly been a nice tailwind for revenue growth, and it has also helped them start to close the gap towards profitability in a speedier fashion,” said Tom White, a senior internet analyst at D.A. Davidson, a wealth management firm.

Uber’s delivery service brought in $1.45 billion in sales nationwide between July and September compared with $645 million during the same period last year.

DoorDash, which also owns another food delivery app, Caviar, reported revenue of $1.92 billion in the nine months through September, compared with $587 million for the same period last year, according to a prospectus filed earlier this year for its planned initial public offering. It recorded 543 million orders through September, compared with 181 million in the same period last year.

Even before Mr. Evangelista took his first food app order, the requirements for the job pushed him deeper into debt.

His electric bicycle set him back $2,000. Two locks for the bike cost about $200. He had to buy a helmet. He even paid out of his own pocket for a $65 tote bag from Postmates, another food delivery app, to carry orders, he said.

His younger brother, Enoc, also laid off from a restaurant job, recently signed up to be a delivery worker. Mr. Evangelista could not suggest an alternative.

“The pay is not good, but there aren’t good jobs out there anyway,” he said. “We need to work and survive the best way we can.”

US inmate has ‘no right to painless death’