Home » Americas » For Biden, a New Virus Dilemma: How to Handle a Looming Glut of Vaccine

As U.S. manufacturers hit their stride, vaccine scarcity will soon turn to plenty as much of the world goes begging. And vaccine makers need answers now about what to do with the coming surplus. 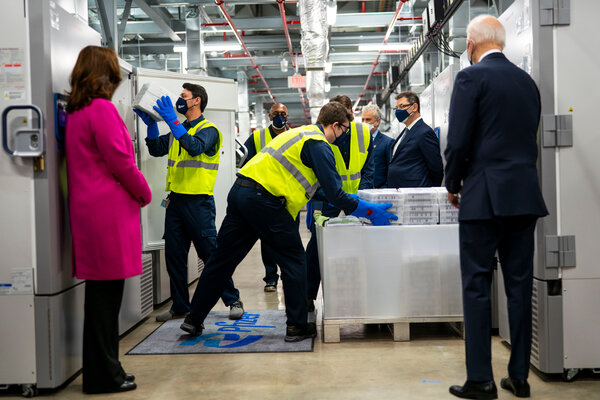 By Sharon LaFraniere and Noah Weiland

WASHINGTON — Biden administration officials are anticipating the supply of coronavirus vaccine to outstrip U.S. demand by mid-May if not sooner, and are grappling with what to do with looming surpluses when vaccine scarcity turns to glut.

President Biden has promised enough doses by the end of May to immunize all of the nation’s roughly 260 million adults. But between then and the end of July, the government has locked in commitments from manufacturers for enough vaccine to cover 400 million people — about 70 million more than the nation’s entire population.

Whether to keep, modify or redirect those orders is a question with significant implications, not just for the nation’s efforts to contain the virus but also for how soon the pandemic can be brought to an end. Of the vaccine doses given globally, about three-quarters have gone to only 10 countries. At least 30 countries have not yet injected a single person.

And global scarcity threatens to grow more acute as nations and regions clamp down on vaccine exports. With infections soaring, India, which had been a major vaccine distributor, is now holding back nearly all of the 2.4 million doses manufactured daily by a private company there. That action follows the European Union’s decision this week to move emergency legislation that would curb vaccine exports for the next six weeks.

Biden administration officials who are inclined to hold on to the coming U.S. surplus point to unmet need and rising uncertainty: Children and adolescents are still unvaccinated, and no one is certain if or when immunity could wear off, which could require scores of millions of booster shots.

“We want to, largely, be a part of the global solution here,” Jen Psaki, the White House press secretary, said this week. But she added, “There are still a number of factors that are unpredictable that we need to plan for to the best of our ability, including the variants and the impact and what will be most effective, as well as what will work best with children.”

Vaccine manufacturers and some top federal officials say decisions about what to do with extra orders must be made within weeks, or the uncertainty could slow production lines. The manufacturing process can take up to 10 weeks, and changes for a foreign market need time. The regulatory rules that govern vaccine shipments present another hurdle, as does the limited storage life of the drug substances that make the vaccine.

Vials in the nation’s bottling plants in Michigan and Indiana are being labeled for use at home. If their destination is unclear, either the production line must pause or vials directed for overseas may need to be relabeled.

Once the doses are shipped out to states, federal regulations prohibit recalling them even if they are not needed domestically. And vials cannot sit in storage forever: While vaccine itself can last up to a year in a frozen state, once bottled it must be used within four to six months.

All these variables threaten to complicate what so far has been relatively smooth sailing for the Biden administration. Thanks in part to the federal government’s determined assistance over many months, vaccine manufacturers have been steadily increasing their output, and states have snapped up new doses as fast as the government could deliver them.

Construction starts on Regina condo for those living with intellectual disabilities